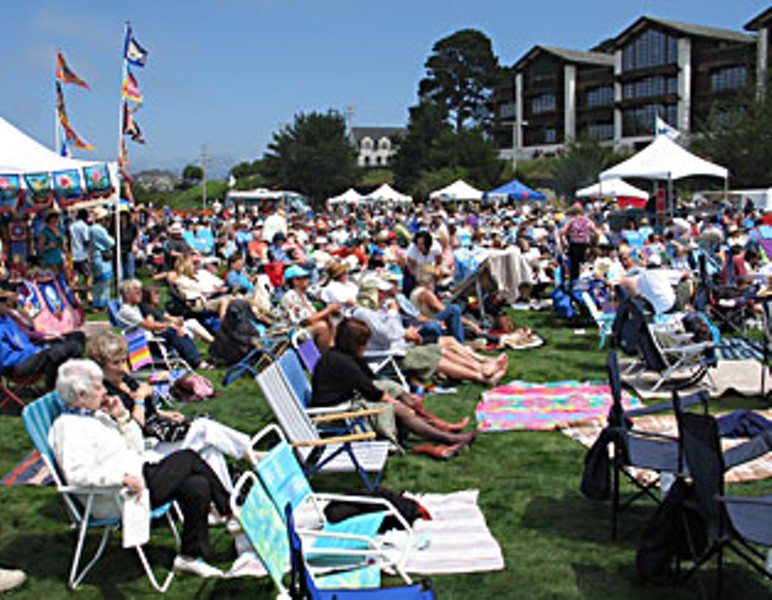 Warm breezes are just around the corner and with the change in weather comes hot fun in the summertime and a collection of annual outdoor music events, some of the local ones decades old.

When last year’s festival guide came out, we were reporting on a battle over Humboldt County’s biggest music fest, Reggae on the River. At the time, Southern Humboldt’s Mateel Community Center was locked in battle with the festival’s former producer and had just announced the cancellation of the event once known locally as just plain Reggae. Reggae Rising, a similar reggae festival run by the old producer, People Productions, ended up taking its place.

The waves from the associated legal fight are still rocking the SoHum community. Civility fell by the wayside as civil suits and countersuits ensued. At this point, a year later, the suits are still in court and legal bills are mounting. Nothing has been resolved.

Meanwhile People Productions is moving forward with the 2nd Annual Reggae Rising and, last week, the Mateel announced the revival of Reggae on the River, “like a phoenix rising from the ashes,” as they put it in their p.r., borrowing a metaphor. Their “transitional” stripped-down one-day affair is “offered in a keep-the-name-alive-forever spirit,” at a new location, downriver at the Benbow Lake State Recreation Area. As you’ll see from the list below, Benbow will be one of the happening spots this summer.

The 32nd Annual Summer Arts and Music Festival. The Mateel’s yearly summer love fest kicks off the festive season this weekend. Musically speaking, it’s bigger than ever with even more imported bands than last year and a plethora of local acts of all sorts. Check the Calendar section for more details. May 31 and June 1, Benbow Lake Recreation Area south of Garberville. www.mateel.org 923-3368

The 31st Annual Redwood Run. They call it the “ultimate biker party.” Classic rock and custom motorcycles combine for a weekend along the river near the Humboldt/Mendocino border. This time out the music line-up includes The Marshall Tucker Band, Ten Years After, Delbert McClinton, Ratt, Creedence Clearwater Revisited (sorry, without John Fogerty) and locals Jimi Jeff and the Gypsy Band and Spudgun. June 13-15, Riverview Ranch, Piercy. www.redwoodrun.com 247-3424

Reggae on the River.The Mateel’s idea is to take things back to the roots and “eschew top-heavy headliners” like those at that other Reggae fest. The lineup: Culture with the late Joseph Hill’s son, Kenyatta Hill as front man, The Wailing Souls backed by Ziggy Marley’s band, Katchafire from New Zealand and dancehall star Warrior King among others. Note: There’s no onsite camping and because it’s in a state park, music ends at 10 p.m. July 19, at Benbow Lake State Recreation Area. www.mateel.org

The 20th Annual Humboldt Folklife Festival. The Humboldt Folklife Society’s yearly summer bash expands a bit beyond Blue Lake kicking things off with the Kickoff Swing Dance July 19, at the D Street Neighborhood Center in Arcata, followed by the Annie and Mary Day Fiddle Festival July 20, at Perigot Park, then weekday shows: Flying Fingers (July 21), Acoustic Jazz (July 22), and Lila’s Choice, a Songwriter Showcase (July 23) all at Dell’Arte’s Carlo Theatre, Backyard Bluegrass and Beyond (July 24) out back behind Dell’Arte, an Old Timey and Contra Dance at the Bayside Grange (July 25) and the grand finale all day Free Folk Festival (July 26) all around Dell’Arte. You’ll find just about every local folk and/or roots musician playing sometime during the week. July 19-26. www.humboldtfolklife.org

The 2nd Annual Reggae Rising. As with last year’s festival, the Rising lineup is packed with top reggae performers, and not much else. Among the imported talent: UB40, Sizzla, Beres Hammond, Sly and Robbie, Tanya Stephens, Junior Reid, Don Carlos, Julian Marley, Gentleman, Collie Buddz, Baby Cham and Mr. Vegas.The localLion Camp Showcase with Ishi Dube and Jah Sun and Jade Steel and Emerald Triangle are among the dozen or so additional acts. August 1-3 at Dimmick Ranch and French’s Camp, Piercy. www.reggaerising.com

Elsewhere on August 31, People Productions presents a day with Willie Nelson, either at Benbow or on the Dimmick Ranch, depending on the result of a pending permit request that goes to the Planning Commission in June.

It’s not a festival per se, but the Benbow Inn presents a series of contemporary jazz concerts on its terrace, a week’s worth June 22-29 an a dozen more from August 17-30. www.benbowinn.com

Humboldt State’s CenterArts season will be kicking in late August and on August 28, HSU’s Associated Students have a fest called HumWeek 2008 with Ozomatli, Brett Dennen, !!! and the comedy troupe Upright Citizens Brigade performing outdoors on campus.

The Buddy Brown Blues Festival typically runs one weekend day in August. No word on which one. There was also a plan in the works for a revival of the alt. rock extravaganza Bummerfest, but it involved a now-closed venue, so it may or may not play out. One thing for sure: The North Country Fair is back on track, set for the end of summer, Sept. 20 and 21 on the Arcata Plaza. The always local music line-up is TBA. www.sameoldpeople.org

Meanwhile outside Humboldt County,but within a tank of gas:

The Outside Lands Music and Art Festival. This new one in Golden Gate Park fits into the mega-fest vein. The diverse lineup include Radiohead, Tom Petty and The Heartbreakers, Wilco, Jack Johnson, Beck, Manu Chao, Ben Harper, Widespread Panic, Steve Winwood, Devendra Banhart, Primus and Sharon Jones and The Dap-Kings, and that’s just a fraction of the acts. August 22-24 in San Francisco’s Golden Gate Park www.sfoutsidelands.com

Earthdance. The central location for this simultaneous international dance for peace is in Northern California. Along with wisdom from elders from around the world, activists’ speeches and advice on healthful living, there’s music and more music. Headliners so far include Michael Franti and Spearhead, Kinky, Anthony B, Dumstaphunk, JJ Grey and Mofro, Buckethead, Lotus and Queen Omega. Sept. 12-14 at the Black Oak Ranch, just north of Laytonville. earthdancelive.com