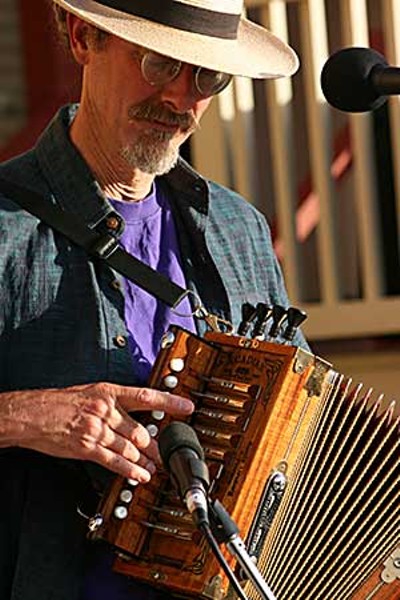 As they say in the song, "Summer's here and the time is right -- for dancing in the streets." Well, it's almost summer, anyway, and time to think about all those summer music festivals, where, locally, the dancing mostly takes place in parks and meadows.

The last couple of years a report on this seemingly light topic somehow involved legal issues and court cases, mostly the result of a hard-fought battle for the control of Humboldt's biggest music fest, the one affectionately known as Reggae. Those issues were resolved relatively peacefully and we now have two Reggaes, but that does not end all fest-related controversy. The venerable North Country Fair is fighting a turf war with the city, then there's the debate regarding the Redwood Run's traditional "Wet T-Shirt Contest." And no, not about whether it's a sexist relic that should be dropped, it's a "natural vs. customized" issue. And on that odd note, we bring you The Guide:

The 25th Annual Reggae on the River. The Mateel celebrates the Silver Anniversary of the festival downriver from the original site with a "return to its roots as a community event," a one-day show with a roots-heavy lineup including The Mighty Diamonds, The Abyssinians, Tanya Stephens, Queen Omega, Nigerian star Majek Fashek, Cali band Soul Majestic and locals Woven Roots, among others. Note: Camping nearby but not onsite, reserve early. Saturday, July 18, at Benbow Lake State Recreation Area. www.mateel.org.

The 31st Annual Humboldt Folklife Festival. The Humboldt Folklife Society's week-plus music marathon is presented in conjunction with Dell'Arte's Mad River Festival. It kicks off with a pair of dance nights: a Square Dance July 17 at the Arcata Vets' Hall, then a Family Contra Dance July 18 at Freshwater Grange. Those are followed by the Annie and Mary Day Fiddle Festival, July 19 at Blue Lake's Perigot Park, then weekday shows: Flying Fingers, July 20; ?60s-style folky Village Coffeehouse, July 21; and Acoustic Jazz, July 22, all in Dell'Arte's Carlo Theatre, then Backyard Bluegrass and Beyond, July 23, out back behind Dell'Arte. A Friday night Swing Dance at the Arcata Vets' Hall, July 24, is followed by the grand finale All Day Free Festival, Saturday, July 25, all around (and even inside) Dell'Arte's Blue Lake facility. Any local folk and/or roots musician you know will be playing sometime during the festival. July 17-25, Blue Lake and beyond. www.humboldtfolklife.org.

The Third Annual Reggae Rising. The massive reggae fest on the Eel is back with another mix of roots and dancehall, including the return of Gentleman and the Far East Band, Luciano, Capleton, Lutan Fyah, Freddie McGregor, Marcia Griffiths, Tony Rebel, Brit reggae stars ASWAD and The Original Wailers with Al Anderson and Junior Marvin, among others. August 1-3 at Dimmick Ranch and French's Camp, Piercy. www.reggaerising.com.

The First Humboldt County Music and Arts Summit. The nascent music fest (whose organizers should have looked at a calendar to avoid competition from the O-Fest) brings an array of bands to Willow Creek for a two-day bash, including Alma Melodiosa, Woven Roots, SambAmore, WoMama and Jimi Jeff and the Gypsy Band. August 29 and 30 in Willow Creek. www.humboldtcountylove.com.

Etc. Carol Bruno is no longer involved in Reggae (Rising or on the River) but her concert company, People Productions, is not resting. They're presenting Sounds of The Summer ?09, a pair of heavyweight hip hop/reggae shows at the Redwood Acres Fairgrounds. First up: Snoop Dogg and Stephen Marley on July 8, then Nas and Damian Marley, who are taking a break from the Rock the Bells tour for a show July 30, which just happens to be the day before Reggae Rising.

The Buddy Brown Blues Festival typically runs one weekend day in August. No word yet on which one. The North Country Fair's Same Old People are battling the City of Arcata over fees and use of the grassy areas, but otherwise the fest is on track, set for the end of summer, Sept. 19 and 20 on the Arcata Plaza. The always local music line-up is TBA. www.sameoldpeople.org.

The 31st Annual Harmony Festival. The former New Age fest continues its evolution celebrating "Harmony From the Roots Up," with music in an ever-wider array of styles including Michael Franti, India.Arie, Hasidic reggae star Matisyahu, Cake, Kitaro, K'Naan and Steve Kimock, with Balkan Beat Box and The Orb headlining the Techno-Tribal portion, Bad Brains and Dead Kennedys in a new skater zone, plus speeches by Julia Butterfly Hill and Starhawk, among others. June 12-14, Sonoma County Fairgrounds in Santa Rosa. www.harmonyfestival.com .

Woodstock 2009. The Council of Light and 2b1 Multimedia, the folks who brought you the Summer of Love 40th Anniversary Concert, are working with "Woodstock 1969" producer Artie Kornfeld, to produce a free concert marking the anniversary of the seminal rock fest. No lineup announced aside from an attempt to break the world's record for largest guitar ensemble: They'll play Jimi Hendrix' "Purple Haze." Oct. 25 in Golden Gate Park, San Francisco. www.2b1records.com/woodstock40sf.