Restaurants, produce and the meaning of local 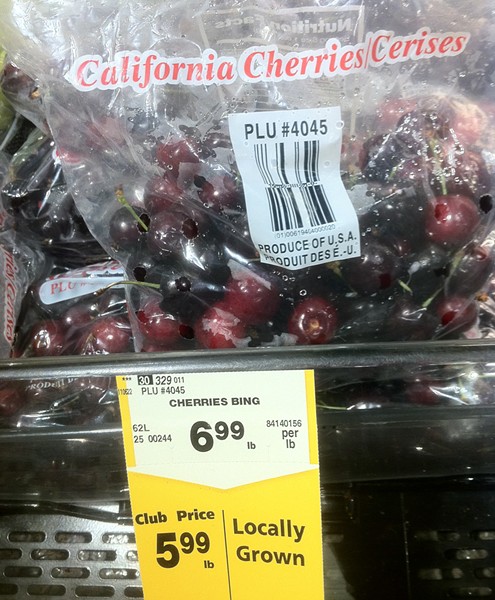 Hooray, it's summer! And it totally is less crappy thus far than last summer. Sun, bearable wind, not too much rain. While I appreciate our temperate clime, I sometimes long for the psychologically comforting seasonal delineators of Actual Weather Changes. In the Midwest and back East, seasons are specific. There's snow. You wear a big coat. Rain melts snow in a hullabaloo of mud and silt. Bam! Spring. The grass is interrupted by flowers. Trees vomit blossoms. Then bam, Summer. You unpack your short shorts, crank up the AC and lament how that gym membership lies dusty and ignored. Seasons here are distinguished mostly by what's available at the Farmers' Market. More on that later, but first, restaurant news!

New ones seem to be blossoming like buttercups. In Arcata, Toni's Thai menu is up and running, finally. The Thai menu is not actually served in Toni's; you buy it from the gleaming red truck next door and eat it inside. The summer rolls are refreshing and the peanut sauce is not just peanut butter and sugar, it's an actual sauce with layers of coconut and coriander. The rice is perfectly steamed; the meat curries contain a comfortable amount of meat; and the Pad Thai is as good as any I've had.

The Beachcomber Cafe up in Trinidad bought Hank's over in Bayside; it is open for business, complete with awesome local produce and cutie-pie waitresses in alt. aprons.

Z & J's Asian Subs is about to open a new branch in the former Quiznos on Fifth Street in Eureka (by Starbucks). They say there's "still more work to do" but it should be ready in August (we hope). They will have their trademark Earl Grey bubble tea, which is a good reason to go on living.

Avalon unexpectedly lost a VIP chef to the wilds of "family needs," and in a domino effect the Arcata operation Bizou will only be serving dinner intermittently this summer. So last week's special grilled lamb dinners were it, aside from an "occasional spontaneous night here and there," since Chef Ron Garrido is needed at Avalon. "Do you know a chef/cook??" they wonder in their e-newsletter with double question marks. "Would they settle a spell, build very useful skills?" If so send them to Avalon.

In produce news ... Still no word on the stone fruit situation, at least nothing definitive. It's perhaps a little early in the season. The Co-op says they will have peaches from Hunter Orchards over in Trinity in a few weeks; Michael Deppe in produce assures me they were quite good last year (which is not as yours truly recalls them but I'll give him the benefit of the doubt). Watch for the line at the Neukom's stand at the Arcata Saturday market (kitty-corner from the post office) and you'll know their peaches are in. I also hear Willow Creek Farm's cherry harvest is looking great, barring any natural disasters; get them throughout July at the Farmer's Market and local stores as well.

Melons are shaping up tolerable well too: Jane at New Moon Organics says the newly planted ice-cream watermelons are lookin' fine, and that the Hokkaido squash plants are enjoying the sun -- we just need to drag ourselves through the next few months before the Hokkaido drought is over.

It has been an awesome season for greens, thanks in part to the wet spring. The prices of local greens are satisfyingly low right now -- collard, kale and chard from Wild Rose Farm, Luna Farms and Willow Creek Farm are well under two bucks a bunch.

Sweet, aptly-named sugarsnap peas from Flora Organica are at $5.49 a pound.

John Severn at Little River Farm says the strawberries look stellar, and I am looking forward to those mixed berry baskets he does later in the summer. Every jewel-like berry is selected and examined just for me! Berries are so fragile, I eat them year-round (shame) but they are better by quite a lot from local sources. Speaking of: Blueberries from Lost Coast Blueberry Farm in Honeydew are "flying off the shelves," so make pies, make buckle, make muffins!

Rainfrog Farm's kohlrabi is $1.69 a pound, in both red AND green. Described as "an old traditional European vegetable," it's still unfamiliar to many consumers. Apparently it's the veg of choice in Kashmir -- no joke. Grated raw or sliced and steamed, it's not on my table with Kashmirian frequency, but it's a pleasant change from cauliflower. Kohlrabi is from the cruciferous family, so not surprisingly the taste is mild and appley, like a broccoli stem. It's firm and thin-skinned. Try this: Peel and grate two smallish kohlrabi. Toss with two grated radishes, a tablespoon white wine vinegar, a quarter cup minced parsley and/or chives, a teaspoon fresh chopped mint (optional, but probably makes it more Kashmiry), a teaspoon sugar, two tablespoons olive oil and a tablespoon of plain yogurt. Salt to taste. You could add a grated beet or carrot for a sweet note. I also like to sizzle a teaspoon of curry powder in a half-cup oil, add a small handful of raisins and the juice of a lemon, pour over grated raw kohlrabi (around a cup and a half) and toss with lots of chopped parsley, salt and pepper.

In my discussions with local food people I keep hearing about "green-washing," a pithy term hitherto unfamiliar to me. Regarding localness, it describes the practice of exaggerated claims, verbally or on signs or on menus, that food is "local" or that "local" produce is used. What many places do not say is what that actually means: How local is "local"? And how much is enough to use that term? I have no problem in the slightest with buying conventional produce; I try to eat locally grown as much as I can afford because local food usually tastes better, and industrially produced food comes with all sorts of baggage, environmental and otherwise, to make a broad generalization. What I really object to is misleading advertising that implies to consumers that some products' ingredients are local, when they're really from far away, or only one ingredient is, or that, say, the salad is supposedly locally grown when the chef only bought local lettuces twice last spring.

I discussed this practice and what can be done about it with Patricia Cambianica who owns La Trattoria, Jackie Keegan from the Beachcomber, and my friend Luke Patterson from Luke's Joint (and, soon, The Other Place), three establishments that farmers routinely praise for their commitment to local foods. The consensus seems to be that as consumers, the onus is on us to be responsible for the validity of restaurant locavore claims. There is no official definition of "local." There is no government oversight.

Ask at your favorite supermarket or "locavore" restaurant exactly what is from where, how many ingredients are local, and what they are looking forward to using as ingredients as the summer develops. Start a dialogue at the Farmer's Market with producers about whom they sell to, then patronize those businesses, and let the staff know you appreciate their efforts to buy local. If we are to insure that the word "local" carries weight as a marketing term, it's our job to validate it.