Summertime and the livin' is easy. So are some of your summer puzzles; others are a bit tricky. I bet when you see the solution of some of these, you'll go, "Oh, duh! Of course!"

An 80-foot-long cable hangs from the top of two 50-foot-high poles. The center of the cable is 10 feet above the ground. How far apart are the poles?

Tulip and Jesse are prisoners in separate cells. Every morning, a guard enters first Tulip's, then Jesse's cell, tossing a coin in each. After seeing the outcome of the toss in her cell, Tulip has to guess what the toss in Jesse's cell will show. Then the guard goes to Jesse's cell, tossing the coin, after which Jesse guesses what was the outcome of Tulip's toss. If at least one of their guesses is correct, they live another day — otherwise they both die. Before being locked up, they were able to briefly confer. How are they able to avoid execution indefinitely?

Go for the Girls!

The king decrees that all child-bearing couples must continue to bear children until they have a daughter and, once they have a daughter, they will stop having children. After many years, what's the ratio of girls to boys, assuming each birth has a 50-50 chance of boy or girl.

Your new friend tells you she has two children and (because she knows you love puzzles) at least one of them is a girl. "So," she says, "what's the likelihood that my other child is a girl?" 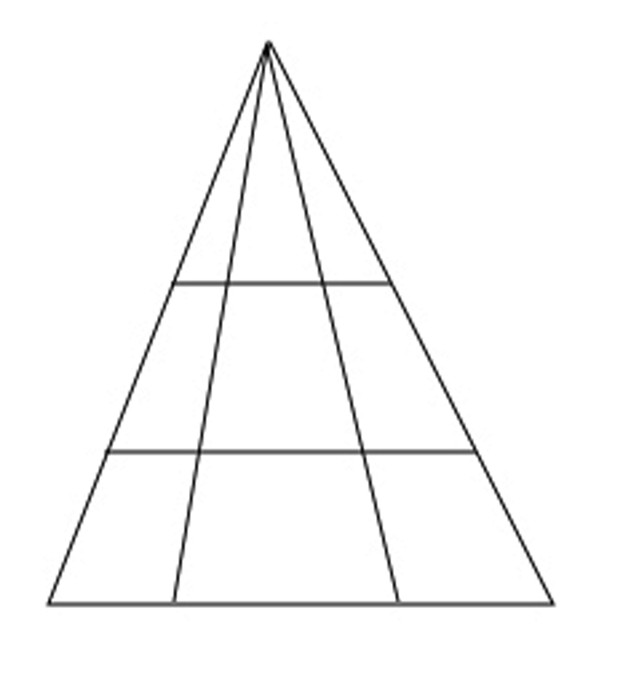 How many triangles do you see?

In a race, you pass the person in second place just before the finish line. How did you place?

What are the next three letters in the sequence WATNTL?

Rearrange the letters of the word "dormitory" into a two-word phrase describing a typical dormitory.

Make the following true without using a pencil or pen:

A father said to his son, "Two years ago, I was three times as old as you, but in 14 years, I will be only twice as old as you." How old are they now?

Pick a random point inside a square and draw straight lines to it from the midpoint of each side. If three of the resulting areas are 16, 20 and 32 cm2, what's the fourth?