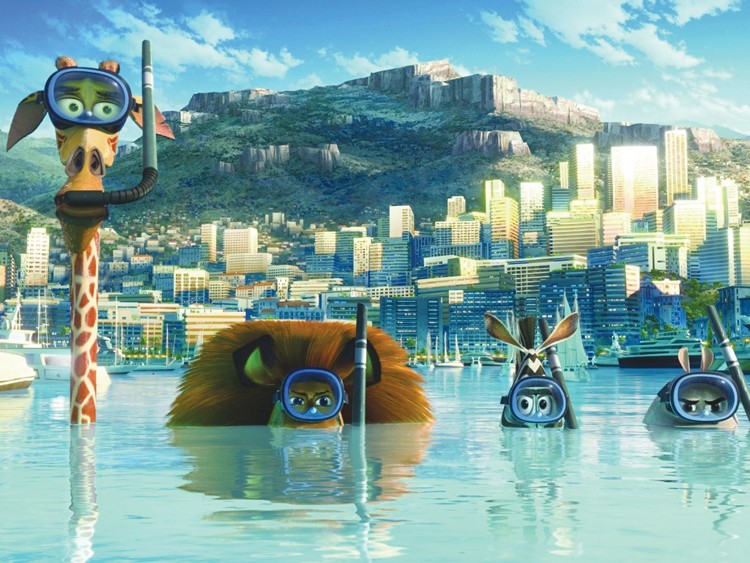 MADAGASCAR 3: EUROPE'S MOST WANTED rockets out of the gate at a seemingly unsustainable pace and manages to keep it up. Even more surprisingly, the jokes come as thick and fast as the chases, and the vast majority of them actually land. This is a sequel to a sequel to a 2005 movie with a wafer-thin premise, so despite the A-list cast (the voices of Ben Stiller, Chris Rock, Jada Pinkett Smith) I expected next to nothing from it. Which worked to my advantage, I think: I left the theater having actually enjoyed myself.

This installment of the franchise finds long-suffering New York zoo lion Alex (Stiller) and his buddies stranded in Africa. Their high-living penguin companions fly off in a monkey-powered autogyro for an extended gambling sojourn in Monaco, without a thought for their displaced mammal pals. Said mammals set off in hot pursuit, destroy a casino and attract the attention of a bloodthirsty animal control agent (voiced by Oscar-winner Frances McDormand). She gives chase, our protagonists fall in with a fleabag circus company, and madcap adventures ensue as the gang makes its way back to New York.

Apparently, some top-tier voice actors have a beef with regular screen stars horning in on their turf. I don't have a dog in that fight, and in this case the performances seem perfectly serviceable (although sometimes Chris Rock tries a little too hard for his laughs).

My only real complaint stems from a climactic circus sequence that falls just short of spectacular. It nearly makes it: We get tiny Cockney dogs on rocket skates, a Ducati-riding bear, a daredevil Russian tiger, and more psychedelic colors than you can shake a prescription bottle at. But when it all comes together with a Katy Perry song behind it, the scene doesn't pop the way it should. This is a petty gripe, but the rest of the movie hums along so well, for so long that this misfire seriously interferes with the narrative flow. Still, Madagascar 3 is more fun and better crafted than the majority of the movies that major studios fob off on us these days. PG. 85m.

PROMETHEUS. I may be getting ahead of myself, but the two movies I saw last weekend gave me hope. Not a lot (I've seen too much for the scales to fall completely from my eyes), but cautious optimism. Madagascar 3 is fun and bright and celebrates friendship and trust. Prometheus, dark and dismal, with themes of betrayal and hubris, is that movie's antithesis and a visually breathtaking cinematic spectacle.

By way of disclosure I should make it clear that I'm no Ridley Scott acolyte. I've enjoyed some of his stuff quite a lot (Thelma & Louise, Black Hawk Down), but he's not one of my guys. I've watched and enjoyed Alien and the first couple of sequels, but I don't find them as essential as do their worshippers, who are legion. So again, low expectations probably benefitted me here.

After a gorgeous opening sequence, the narrative picks up in 2089 Scotland, where some archeologists find cave paintings indicating extraterrestrial influence on Earth. Fast forward a handful of years, and a couple of those archeologists are in cryostasis aboard the titular ship as it hurtles toward the aliens' supposed origin point. They are among a crew of scientists assembled by an ancient corporate titan (Guy Pearce under several pounds of makeup) to investigate the thesis that aliens created humanity. When they make landfall on the distant orb and start poking around, things go sideways in short order. I don't want to do a disservice to anyone's moviegoing experience, so I'll leave the synopsis at that.

Whether or not Scott's movies really do it for you, it's tough to argue with his general aptitude. The guy's been making films for more than 35 years, and Prometheus testifies to his considerable skills as a visual stylist and director of actors.

As I mentioned, the cinematography alone justifies the price of admission. The platinum color palette and wide-angle tracking shots lend the alien landscape an air of impending doom. Coupled with faultless editing technique and ominous musical motifs, the camerawork ranks among the best I've seen in years.

The cast is tremendous, with standout performances by Noomi Rapace (who played Lisbeth Salander in the Swedish adaptation of The Girl With the Dragon Tattoo) and Idris Elba (Stringer Bell in The Wire). Charlize Theron nearly steals the show, deploying every bit of the icy, aloof intensity she does so well. But the undeniable star is Michael Fassbender, who in recent years has established himself as a force to be reckoned with.

As David, the android jack of all trades, Fassbender becomes a walking embodiment of the movie's aesthetic: handsome, preternaturally capable and troublingly composed, with a sinister undertone. This role is the lynchpin of the whole show, and a lesser performance could have been the film's undoing. But Fassbender plays it just right, down to the comic business of bleaching his hair in homage to Peter O'Toole's T.E. Lawrence. He even gets a (perhaps inappropriate) laugh with a one-liner late in the third act.

This is the kind of thing I look for in a summer blockbuster. It may not be great, but it's intelligent and compelling, and very pretty to look at. I doubt that history will remember Prometheus as favorably as Alien or Bladerunner, but I'd put it a few shelves above Scott's recent output. R. 124m.

ROCK OF AGES. Based on a Broadway production, this musical revels in the debauchery of the glam-metal era -- Los Angeles, circa 1987 -- featuring songs from the likes of Def Leppard, Journey, Whitesnake, Poison ... you get the idea. Starring Julianne Hough, Russell Brand, Alec Baldwin and Tom Cruise.  PG13. 123m.

THAT'S MY BOY. Adam Sandler has apparently given up on trying to make good movies. Here he cashes another paycheck by starring as a moronic, beer-guzzling reprobate who reconnects with the son (what are you doing here, Andy Samberg?) that he fathered as a teenager. R. 114m.

BERNIE. From writer/director Richard Linklater (Dazed and Confused, Before Sunrise), this dark comedy (reportedly based on a real crime) stars Jack Black as a beloved small-town funeral director who befriends an affluent sourpuss of a widow (Shirley MacLaine), and ends up accused of her murder. PG13. 104m.

Speaking of Richard Linklater, the Arcata Theatre Lounge will show his motion-capture film version of Philip K. Dick's dystopian sci-fi thriller A Scanner Darkly this Friday at 9 p.m. R. 100m. If you haven't seen it, this movie has some truly interesting things goin' on, and it looks great on a big screen. After that, the NBA playoffs occupy the ATL until next Wednesday, when Sci-Fi Pint and Pizza Night returns with classic Japanese superheroes: Invasion of the Neptune Men (1961) and Attack From Space (1959). 6-10 p.m. All ages.

MEN IN BLACK III. Will Smith is back as Agent J, the smack-talkin' government agent sent to dispatch diabolical aliens. Third time around is amusing, but nothing to write your home planet about. PG13. 107m.

SNOW WHITE AND THE HUNTSMAN. This visually stylish adaptation of the Brothers Grimm tale suffers from an underdeveloped plot. Plus, the dwarfs aren't even real! PG13. 127m.