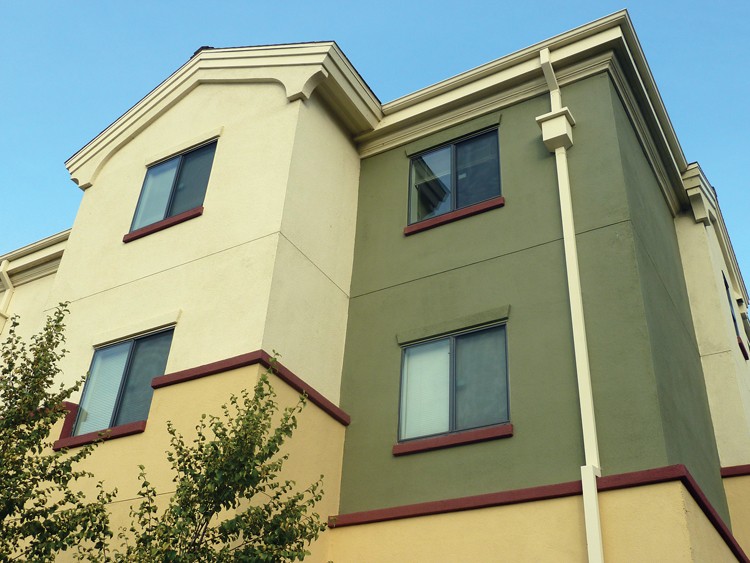 Antony Kim was checking out Humboldt State University's College Creek housing complex after it opened last year when he noticed something odd: The windows.

Actually, it was a small sticker in a corner of the windows that caught his attention, a sticker from the National Fenestration Rating Council, a nonprofit that rates the energy performance of windows, doors and skylights.

The sticker listed the window's specifications, and Kim, a construction management and industrial design major at the time, saw to his surprise that the specs didn't seem to jibe with Arcata's cool, coastal climate.

"It said it was low solar heat gain," Kim recalled recently. "And I thought to myself, ‘Wow, they chose a window that blocks the sun. That doesn't seem right.'"

Kim, now a graduate student at UC Berkeley, initially doubted himself, reasoning that whoever designed the dorms -- which provide apartment-style housing for over 400 students in 97 units -- had superior expertise and know-how. "I figured, ‘I'm just a student. I must be wrong.'"

But "the windows thing bugged me," as he would put it later. So much so that Kim ended up doing his senior project on the energy efficiency, or lack thereof, of the dorm's windows. Titled College Creek Housing Project: Window Energy Performance Optimization Study, it asserted that the window "would have been better suited for Miami rather than Arcata."

Kim's report calculated that a type of window better suited to this climate would have been cheaper and would have saved $1,200 per year in energy costs - or $12,000 over a 10-year period. And that's for just one of College Creek's six buildings.

The trouble, according to Kim, is that dorm windows have a solar heat gain coefficient of .32 -- meaning that only 32 percent of the solar energy beating down on the glass actually makes it into the room.

That doesn't matter as much as Kim thinks it does, because the dorms had to pass stringent energy efficiency standards, according to Traci Ferdolage, HSU's director for Campus Planning and Design.

Architects with RSK Associates, the San Francisco firm that designed College Creek, had to do their own energy efficiency calculations -- not just for the windows, but for the entire complex -- to receive state approval for construction. On the basis of those calculations, College Creek met California's standards, called Title 24 codes, with room to spare.

"We are proud to have designed a student housing project that exceeds California's strict Title 24 energy codes by a little over 15 percent," Ferdolage said in an email last week. She declined a request for a telephone interview.

In her email, she defended the window, saying it enhances rather than diminishes energy efficiency. A window that would have let more solar energy in would also have insulated less well, she wrote, and this "U-factor" means it would have let more heat escape the building.

"This would [have been] counterproductive since the total building energy consumption would go up as the heating load would be higher," she wrote.

An energy efficiency expert with Lawrence Berkeley National Laboratory, asked to analyze Kim's contention and Ferdolage's response, said that while it's "great" that Title 24 standards were exceeded at College Creek, that's hardly the whole story.

"Title 24 is a whole building performance standard that can include trade-offs of one energy consuming factor against another," the expert, Howdy Goudey, wrote in an email. "So it does not necessarily follow that the optimal window glazing choice was selected."

As for Ferdolage's claim that it wasn't possible to provide a window with high solar heat gain without making the window less insulating, Goudey said: "This is not actually true."

"It is possible to have high solar gain windows with equal U-factor performance to low solar gain products," Goudey said. With a good frame, he added, some windows can both let in and trap more heat than the ones used at College Creek.

Goudey does thermal experiments to validate and improve the performance of windows. He is also part of a team of scientists at LBL that provides technical support to the industry that produces the energy efficiency rating labels affixed to new windows. Those are the same stickers that caught Kim's eye.

Nonetheless, there's no disguising the fact that Goudey and Ferdolage are saying fundamentally different things.

Ferdolage says a window that lets in more heat wouldn't have reduced overall energy use, and Goudey says just the opposite.

In an earlier interview, Goudey said the windows at College Creek have insulation and optical properties that make them better suited for a hotter climate, where keeping a building's interior relatively cool is a priority.

A window with such specs would do best in "places that get a lot of direct sun, where you don't want a lot of solar heat coming into the building [such as] Sacramento or the Central Valley," Goudey said.

Ultimately, though, Goudey stopped short of saying Humboldt State's new dorms have the wrong window. That possibility is "not out of the question," he said. But a lot of factors -- among them shading and building orientation -- play into making an appropriate window choice.

And once the sun goes down, passive solar heating through windows becomes irrelevant. "If it's foggy or cloudy, solar heat gain won't help either," Goudey added.

So passive solar heating is most important when it's both cold and sunny outside. "The clear, cold high desert climate of Colorado" is particularly suited, Goudey said.

Other energy efficiency experts, when told of the type of window at the College Creek dorms, said it seemed an odd choice for a marine climate.

Ann McQueenie of Abbay Technical Services, a building energy consultant firm based in Arcata, said that while Humboldt County has lots of microclimates, "Generally in McKinleyville, Arcata and Eureka, a high solar heat gain co-efficient is the best window."

Kent Schell, a Sacramento-based sales representative for Milgard Windows, which provides 70 percent to 80 percent of the energy efficient windows in Humboldt County -- although not the ones at College Creek -- said the window type chosen for the dorms "sounds like a window for a [Central] Valley type climate."

Jeff Davies, a sales representative with International Window Corp., the Hayward-based firm that supplied the roughly 250 windows at College Creek, said "yes and no" when asked if the window was appropriate for a cool climate. "Low-E (for "emittance") glass won't let heat in, but it also keeps heat from going out," said Davies, referring to the microscopically thin coatings of metallic oxide that are deposited on today's high-tech windows as a way to suppress radiant heat.

Davies added that the architect for the dorm chose the window, which has an aluminum frame, in part because it imparted "a commercial look."

In an interview, the architect at RSK Associates in charge of the College Creek project, John Rollings, did not take a position on whether Kim was correct about the dorms' windows.

Instead, like Ferdolage, he said the dorm complex as a whole met state energy standards.

"I'm not saying the student is wrong or right," Rollings said. "What I'm saying is that the building was determined to be energy efficient."

As for why the firm chose the window it did, Rollings would only say that, from an architectural standpoint, the College Creek complex "was an attempt to blend with some of the existing buildings on campus in terms of shapes, forms and colors."

Rollings said that ultimately a project comes down to "pleasing the client" and that HSU officials had made it clear they wanted an apartment-style dormitory complex that would compete with those at other college campuses.

Rollings' firm has also done projects, including a dormitory project, at Stanislaus State University in Turlock, north of Fresno.

As for Kim, to this day he is mystified by the window choice at the College Creek dorms -- not least because choosing the correct one would have been so simple.

"Arcata's climate is mild year round. It's one of the easiest places to design energy-efficient buildings," Kim said.