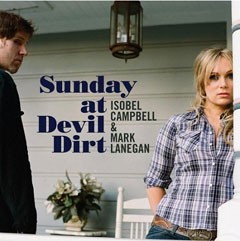 What differentiates Sunday at Devil Dirt from its predecessor, Ballad of the Broken Seas, is a more elaborate and lush sound with intriguing string arrangements, most evident on songs such as "The Raven," the grand and lovely "Who Built the Road" and the seductive "Come On Over (Turn Me On)."

What is oddly evident is the general lack of Campbell's vocal presence, even though she produced, played on and wrote all of the songs on this release. Lanegan possesses a rare, gravelly, worn baritone voice -- you could say that he is an "alt" Johnny Cash. And he worked on a number of collaborations prior to his work with Campbell, including Queens of the Stone Age and his recent collaboration, Saturnalia, with former Afghan Whigs leader Greg Dulli (under the Gutter Twins moniker). Lanegan has also long understood the art of the duet, illustrated with his superb solo effort, Bubblegum (2004), where he shared a number of gritty vocal parries with PJ Harvey. Here Lanegan is more restrained, allowing for space and showcasing his road-weary voice, juxtaposed with Isobel Campbell's higher and more delicate delivery.

The standout examples of true duets, with an interplay between two vocalists, are "Come On Over (Turn Me On)," the Brightblack Morning Light-influenced "Back Burner," "The Flame That Burns" and the soulful "Trouble." And on those tracks, the vocals seem more intimate than those on Ballad of the Broken Seas, largely because the vocals were recorded in the same studio. On Ballad, the vocals were recorded a continent and a sea apart. Campbell's sole vocal performance appears on the bluesy "Shotgun Blues."

When they sing together, Campbell turns the anger and edge around without softening the affair, creating an effect akin to the duets on Nick Cave's Murder Ballads, namely "Henry Lee," with PJ Harvey, and "Where the Wild Roses Grow," with Kylie Minogue. And Campbell achieves this, though a bit understatedly on her part.

Sunday at Devil Dirt succeeds on the strength of Campbell's songs. When the duets truly occur, they often have a seductive and melancholic quality. At some point, though, Isobel Campbell will need to move past having Lanegan as her mouthpiece. She should be worth paying attention to, because she shows on her new release that she has the tools and the chops to deliver a new musical path.