The Avengers launch blockbuster season with a bang! Pow! Smash! 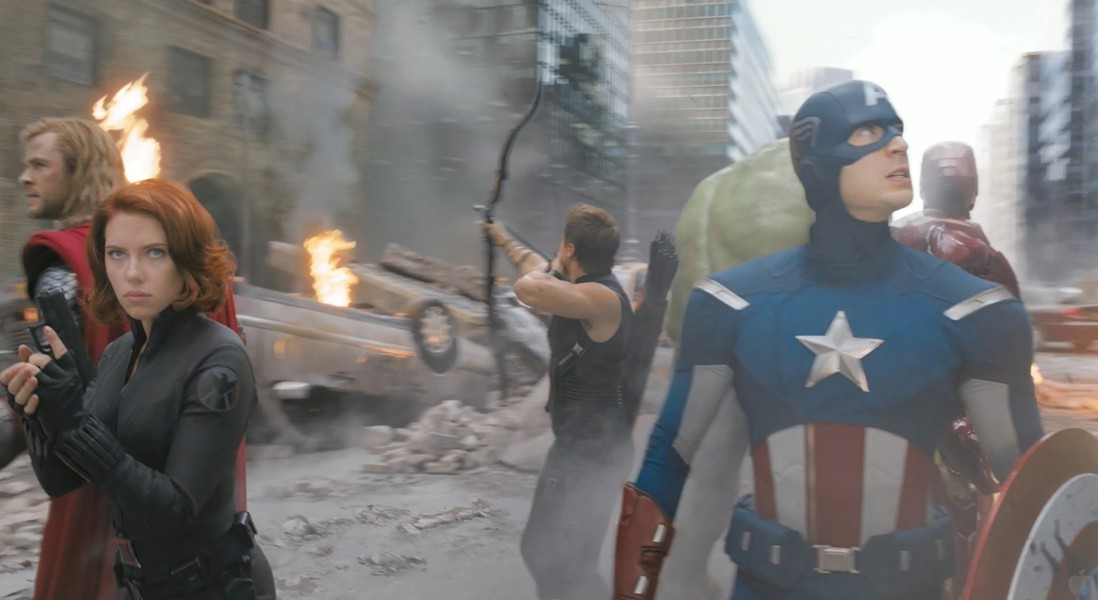 THE AVENGERS. Judging by its $200 million opening weekend, I'm not the only one who finds The Avengers deeply satisfying. Looks like just about everybody is on the same page (save New York Times critic A.O. Scott, whose lukewarm review brought down the great vengeance and furious anger of star Sam Jackson over the weekend). This movie is a happy culmination of all the flaccid Marvel retreads that preceded it in the last few years. Where Thor and Captain America in particular fell flat, The Avengers soars; because it's actually fun.

On another level, we can revel in this because it marks the first time vaunted writer/director/fanboy demigod Joss Whedon has been allowed the budget and freedom he deserves. It is a credit to his considerable skills that The Avengers is action packed and sure-footed without forgetting that comic books, and thus movies based on them, are supposed to have a sense of humor. Whedon's heady cheekiness is a perfect fit here: He's able to crack wise and create clever visual jokes without going the hipster route and winking at the audience. His script is funny without leaning on cynicism or overbearing irony, and it manages to give the characters life they've been sorely lacking in their solo outings.

Under Whedon's direction, Jackson's Nick Fury possesses a degree of conviction and humanity that we haven't seen before. Where other directors chose to make Fury a swaggering figurehead, like Shaft with an eye-patch, Whedon gives the man a heart and grows him into a true leader of men (albeit super ones). Even Chris Evans and Jeremy Renner, who practically disappeared into the background before, come to life on the screen with a combination of toughness and sensitivity that makes their prowess all the more impressive.

To me, the real star of the show is Mark Ruffalo's Incredible Hulk. I should admit that I haven't checked in with the Hulk since the Lou Ferrigno days, so I can't speak to Ruffalo's performance relative to Eric Bana's or Ed Norton's. That notwithstanding, he steals every scene with his ironic befuddlement and submerged rage. And when he Hulks out, he gets some of the biggest laughs and gasps of the whole movie. (After the laughter from one such moment subsided, someone in the back yelled "Goddamn that was awesome!" And he was totally right.)

It wouldn't be a Whedon work without a tough-as-nails heroine who is also impossibly sexy and a smartass. Scarlett Johannson fills those stilettoes marvelously as Natasha Romanoff/Black Widow. As a spy, it might seem that she'd be out of her league here. But the Avengers are a sort of ragtag assemblage by nature, so her lack of superpowers doesn't diminish her cred -- or her ability to serve as a foil and moral compass for some of her more didactic teammates.

It would be unfair to say plot is incidental here, but that may be the movie's only real shortcoming. Whedon does a great job using it as a canvas for tense dialog and breathtaking battle sequences, but main villain Loki (a powerful being from the realm of Asgard) lacks some menace, and his alien minions are just a featureless mob of vaguely humanoid evildoers and space leviathans. It's easy to lose track of their simplistic motivations: On more than one occasion I had to refresh my memory as to why everybody was fighting so much.

Even if the storyline could be more resonant, it hardly subtracts from the film's many pleasures. At the end of the day, this is what a comic book movie should be. PS -- Stay to the end of the credits. It's worth it. PG13. 142m.

THINK LIKE A MAN. This is the movie that held the top spot at the box office until The Avengers came along and blotted out the sun. And it stayed on top for a full two weeks before it arrived here, if I'm not mistaken. No matter. It's an adaptation, of sorts, of Steve Harvey's book Act Like a Lady, Think Like a Man. Adapting a self-help book into a narrative film is a strange notion, but I guess Harvey's license to print money extends to this medium.

The adaptation is a little lazy, hewing closely to a typical rom-com formula: Take a group of friends, each of whom represents an archetype, then get them involved with an equally disparate group of (amazingly attractive) women. Throw in Harvey's book to incite things, and the author himself as a talking head, and you've got it. And yes, it is as trite as all that.

In spite of the uninspired screenplay, Think Like a Man brings enough talent in the cast, and enough charm in its imagining, to be generally enjoyable. There's nothing new on offer, but Kevin Hart, Romany Malco, Gabrielle Union and Meagan Good are funny and sexy and entertaining, and the movie's general positivity carries through. PG13. 122m.

DARK SHADOWS. In their eighth collaboration, Tim Burton directs Johnny Depp as vampire Barnabas Collins (worst vamp name ever?), who's awoken from his medieval tomb in 1972 (a year after the ABC soap opera that inspired this movie ended its run). PG13. 113m.

THE DICTATOR. Opening Wednesday, May 16, for some reason, is the latest from subversive comedy genius Sacha Baron Cohen. This time out, the creator of Borat and Ali G stars as a Middle Eastern dictator. The movie was inspired, I shit you not, by a story written by Saddam Hussein. R. 105m.

This Thursday, the Arcata Theatre Lounge will host a benefit for a proposed indoor skate/BMX park -- a new project from the Ink People. The benefit will include a silent auction, raffle and a double feature: The Cinematographer Project, a feature-length skate doc, and Bad Idea, a BMX video. Friday night is Billy Madison (1995), Adam Sandler's first big hit. For Mother's Day the ATL will screen John Waters' Serial Mom (1994), a dark comedy starring Kathleen Turner. And next Wednesday, the weekly Sci-Fi Pint and Pizza Night features a pair of (need I say "campy" at this point?) Italian space operas -- War of the Robots (1978) and Cosmos: War of the Planets (1977).

THE FIVE-YEAR ENGAGEMENT. An engaging romantic comedy from co-writer and star Jason Segel about the thick and thin that can follow a marriage proposal. R. 124m.

THE KID WITH A BIKE. Grand Jury Prize-winner at last year's Cannes Film Festival follows an emotionally troubled 11-year-old boy who strikes up a friendship with a pretty young hairdresser. In French with subtitles. 97m. PG13.