Supply and Demand: COVID-19 Vaccination Frustrations Boil with Too Few Doses and Another Curveball from the State 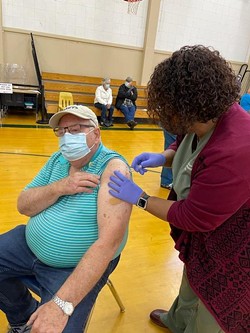 After nearly a year of living with COVID-19, health officials point to the prospect of mass vaccination as the light at the end of the pandemic tunnel, the beacon leading us to normalcy.

But hope and hard reality continue to collide in Humboldt County, where there are simply nowhere near enough vaccine doses to meet even the measured steps of California’s phased rollout plan, which also keeps shifting, much to the frustration of seemingly everyone.

Addressing the Humboldt County Board of Supervisors on Jan. 26, Health Officer Ian Hoffman lent voice to some of the frustrations, saying the state had pivoted from pushing counties to get as many providers as possible — from hospitals and health clinics to pharmacies and individual physician’s offices — approved to administer the vaccine to pushing for just a handful of approved providers due to highly specific handling and data management instructions. The state also shifted, Hoffman noted, from including residents aged 75 and older in its current vaccine distribution phase to saying the vaccine should be made available to everyone over the age of 65, which would have more than doubled the already overwhelmed vaccine line in Humboldt County. But most frustratingly, Hoffman said, is that vaccine distributions are still arriving at a virtual trickle, despite repeated promises that supplies would ramp up.

Shortly after Hoffman’s comments, as the board was still meeting, the state announced it was again overhauling its vaccine delivery framework, revamping its eligibility guidelines, creating a statewide registration and notification system, and instituting sweeping changes that would put it in more direct control of vaccine distribution and administration across all 58 counties.

“We have learned that to accelerate pace we need to dial up the scale of our efforts to ensure vaccine supply goes into arms as quickly as it arrives in the state,” Gov. Gavin Newsom said in a press release, adding that “equity” would continue to be the distribution effort’s “North Star.”

Specifically, the state now intends to “simplify eligibility” by pivoting away from the tiered system announced last month. The new system will see healthcare workers, residents aged 65 and older, teachers and childcare workers, emergency responders, and food and agriculture workers all made eligible to receive the vaccine, if they are not already, in mid-February. From there, the state will open up eligibility to groups strictly by age.

A statewide website (www.myturn.ca.gov) will allow residents to register to receive the vaccine and notify them when it’s time to make an appointment.

Next, the state announced it will work with a “third party administrator” to build a statewide vaccine administration network and allocate vaccines directly to providers to “maximize distribution efficiency,” meaning Public Health, hospitals, doctors’ offices, health clinics, pharmacies and “pop-up” sites would receive vaccine distributions directly from the state.

Exactly how this new state approach meshes with local efforts to prepare a vaccine distribution network remains to be seen. But one thing that seems very clear is that it doesn’t address what all local, state and national health officials seem to agree is by far the biggest impediment to mass vaccination: available vaccine supply.

Addressing the board, Hoffman estimated the county has received about 15,000 doses of Pfizer and Moderna vaccines, both of which require that people receive two doses each several weeks apart, meaning what’s been delivered to date is enough to fully vaccinate 7,500 people.

Hoffman said the county had completed the first phase of distribution, having offered the vaccine to all county healthcare workers, though some are still receiving their injections, and was moving on to begin offering vaccines to the county’s first responders, K-12 teachers and residents aged 75 and older. That’s a pool of about 17,000 people that, coupled with the county’s healthcare workers, makes approximately 27,000 people currently eligible to receive their COVID-19 vaccination. Not only did the county not have enough vaccine to meet that immediate need — to say nothing of the tens of thousands of other local residents eagerly awaiting the chance to be vaccinated — Hoffman said it had no idea when it would.

While there were hopes the supply chain would ratchet up, Hoffman said the county is only receiving between 1,000 and 2,000 first vaccine doses per week, determined by a formula under which California was distributing vaccine doses based on population, leaving Humboldt County to receive 0.4 percent of whatever the state distributes each week.

Adding to local frustrations, the state and the U.S. Centers for Disease Control also changed course last week, complicating local expectations, saying people aged 65 and older should be cleared to receive the vaccine. But opening vaccines up to anyone aged 65 or older would have put another 16,000 Humboldt County residents in a line that was already far too long for the number of doses available, so Hoffman and Public Health held off, saying they would stick to the original framework of first vaccinating those 75 and older. But the announcements from the state and federal government falsely raised expectations, leaving the Joint Information Center and supervisors to field frustrated calls from 64- to 74-year-old residents who worried they were being left behind.

Humboldt County Emergency Services Manager Ryan Derby told the board his office was assisting Public Health in planning for mass drive-through vaccination clinics, noting that 60 medically licensed volunteers had already been sworn in to assist with a large scale vaccination effort and sites had been identified. Everything was in place but the vaccine, Derby said, echoing Hoffman’s comments.

“We’ve built the ship as big as we can and now we don’t have enough to fill it,” Hoffman said. “This is going on statewide. This is not a problem localized here to Humboldt County.”

The chasm between local vaccine supply and expectations has left some residents in line to receive the vaccination grasping for opportunities. As of Jan. 25, the county was urging local residents in line to receive the vaccination to fill out a county interest form (available at www.humboldtgov.org/2872/Vaccine-Info), and a press release following the state’s announcement the following day urged residents to continue that course, at least until “the state’s system is functioning.”

While some local healthcare providers have voiced concerns about the challenges of providing vaccinations to large swaths of the county while also providing customary care to their patients, some recently began holding clinics for patients. Most notably, Mad River Community Hospital held a large, seven-hour vaccination clinic Saturday at neighboring Pacific Union Elementary School for patients of its affiliated Mad River Express, Six Rivers Medical Center, Humboldt Family Medical Center and home health clinics who are 75 and older.

Hospital spokesperson Jacqueline Martin said the clinic was designed to be by invite-only but word quickly leaked out. Multiple sources sent the Journal email chains showing hospital employees and some former public health officials sharing word of the clinic in their social networks, saying it was open to anyone 75 or older. Another source told the Journal a relative who is not a patient of any of the hospital’s clinics had called the hospital to inquire about a vaccination and been told about the clinic.

Ultimately, Martin said only an “extremely small number” of the 624 people vaccinated were not patients of any of the hospital’s affiliated clinics and the hospital decided to vaccinate them anyway because they’d waited in line — in some cases for hours — and met the over-75 threshold that put them most at risk for critical outcomes if infected with the virus. (Twenty of the county’s 27 COVID-related deaths have been people over the age of 80, with another four over the age of 70.) But some have raised equity concerns about people not being turned away, saying it puts those with better community connections in a position to jump the line ahead of peers who face the same COVID-19 risk but are at greater socio-economic disadvantage.

But strictly from a perspective of putting as many shots in arms as possible, the clinic — the largest single vaccination event in the county to date — was widely considered a success and Martin said another is scheduled in the coming week, with an invite already having gone out to hospital clinic patients.

The Safeway on Harris Street in Eureka is also offering COVID-19 vaccines by appointment. A form on the store’s website indicates the vaccinations are only available for healthcare workers but multiple sources told the Journal the store was making exceptions for anyone over the age of 75, though attempts to confirm that with the store’s corporate office were unsuccessful.

But as so much local attention has shifted to the vaccine, COVID-19 continues to spread throughout Humboldt County at an escalating rate, with the county on pace to confirm 1,000 new COVID-19 cases this month. As the Journal went to press Jan. 26, the county had already confirmed 892 cases for the month, eclipsing the single month record of 863 set in December. Of the 2,652 confirmed cases and 27 COVID-related deaths the county had confirmed as of Jan. 26, 1,755 cases and 18 deaths had come since Dec. 1. The county’s test-positivity rate has also risen apace, going from 3.6 percent in November to 7.3 percent in November to 10.1 percent through the first 26 days of January.

At the board meeting, as the state, unbeknownst to Hoffman, was preparing to throw another curveball, the health officer reiterated that the problem is that Humboldt County just “doesn’t have enough vaccines” or know when the supply stream will ratchet up, making it a slog to get through the 27,000 people who were eligible and in line as of the meeting.

Wen the conversation returned the board, First District Supervisor Rex Bohn and Second District Supervisor Michelle Bushnell asked when teachers would be vaccinated so more local children could return to school. Hoffman said he simply didn’t know, explaining that the county’s 3,100 or so educators remain up in line with first responders and those 75 and older. Bushnell pondered aloud whether teachers had been deprioritized locally and Bohn pressed Hoffman on whether he could commit to getting teacher vaccinations started next week or next month.

“I have answered the question, Supervisor Bohn,” Hoffman answered, visibly frustrated, adding that teachers’ priority status has never changed and reiterating that there simply isn’t enough vaccine available for everyone currently eligible.

After the exchange — and a public comment period that saw someone inquire why certain sector employees were being prioritized above those who are 65 and older and therefore at increased risk of critical outcomes from the disease — Fifth District Supervisor Steve Madrone offered a plea for patience, saying this is not the time for people to panic or get angry.

Thadeus Greenson (he/him) is the Journal’s news editor. Reach him at 442-1400, extension 321, or thad@northcoastjournal.com. Follow him on Twitter @thadeusgreenson.