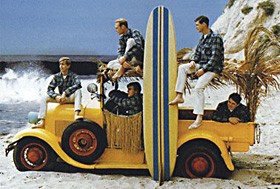 Dennis Wilson once said, “Brian Wilson is the Beach Boys. We are his messengers.” Brian Douglas Wilson, the principal songwriter, producer, arranger, composer, architect and mastermind behind the Beach Boys , turned 65 on Tuesday, June 20, just two days after the birthday of one of his primary musical rivals and equals — Sir Paul McCartney (both born in 1942). It would seem unlikely that this kid from Hawthorne, Calif. (also the birthplace of Karen Carpenter, Kim Gordon, and the brothers Dave and Phil Alvin from the Blasters) would have anything in common with this working class lad from Liverpool. But the two would soon listen to and be influenced by one another’s work — with admiration and envy. Wilson had admitted to have repeatedly listened to Rubber Soul, upon its release in 1965, finding it “mind-blowing.” In turn, McCartney was astounded by Pet Sounds, a record that would eventually prove to be a milestone in contemporary music history.

Wilson, who was born deaf in his right ear, exhibited his gift at a very young age on piano — a true wunderkind. By the time he was 19, he had fired his overbearing father/manager and become the producer of the band, with sole artistic control. The result gave the Beach Boys nine consecutive gold records and 29 Top-40 hit singles. In 1965, Wilson decided to stop touring with the band to dedicate his time to writing and produce songs. Bruce Johnston replaced Brian (bass, vocals) on tours. (Johnston actually took over after a brief three-month stint by Glen Campbell).

Wilson wanted to artistically expand his music, his compositions, taking it to another level, which resulted in Pet Sounds, released in 1966. However, the recording of it was met with opposition and resistance from his bandmates. In particular, Mike Love, who had been Wilson’s main song collaborator prior to Pet Sounds, was not happy with the lyrics that Tony Asher had written on eight of the 13 songs slated for the record. Neither the Beach Boys nor the general public seemed ready for this elevated form of pop music. Though the record sold poorly (for a Beach Boys record), it garnered the respect and admiration of his musical contemporaries, especially Paul McCartney, who received an advance acetate of the album and listened to Pet Sounds repeatedly (along with George Martin and John Lennon), prior to the Beatles’ recording of Sgt. Pepper’s Lonely Hearts Club Band. To make matters worse, Capitol Records, out of a panic, decided to release a Beach Boys greatest hits package only several months after Pet Sounds’ release.

By 1967, Brian Wilson had already been working on the ill-fated Smile record, something he called his “teenage symphony to God,” collaborating with young lyricist Van Dyke Parks. Smile would become one of the “Great Lost Albums,” with cuts released in various Beach Boys collections, including the masterpiece “Good Vibrations,” which became a No. 1 hit.

“All they had to do was put their voices on the tape,” said Wilson in a 2004 interview with Mojo magazine. But the Beach Boys had just returned from a successful fall 1966 tour of the U.K., gaining the number one spot in New Musical Express’ Best Vocal Group readers’ poll (ousting the Beatles). “[The Beach Boys] didn’t like it because it wasn’t surf music anymore — it was a notch up, a step up in creativity,” said Wilson. “Mike [Love] is the one who didn’t like it the most.”

Highly sensitive to criticisms and a lack of support (and/or understanding) within his own clan (Love is Wilson’s first cousin), Brian Wilson witnessed the recording sessions collapsing, and he retreated in a deep depression, leading to a nervous breakdown. Smile was shelved. It wasn’t until 2004, with the help of various members of the Wondermints (namely Darian Sahanaja) that Wilson was able to finalize and complete his vision, with musicians who wanted to assist Wilson to achieve this. This writer was fortunate (and grateful) to witness Brian Wilson and his band perform Smile at the Hollywood Bowl on Labor Day weekend in 2005. The show was nothing short of brilliant — beautiful, humorous and emotional. Also, the first song of his encore was “Love and Mercy,” a song from his first solo effort, dedicating it to the people of New Orleans (this was shortly after the destruction of Hurricane Katrina). There was hardly a dry eye in the dead-quiet, attentive audience.

Wilson himself, in retrospect, thought that Smile was too ahead of its time, that the listening public wouldn’t have understood it in 1967. In an interview from the 2005 documentary Beautiful Dreamer: Brian Wilson, he said, “I’ll tell you, from my heart, in 1967, the reasons why I didn’t finish Smile were: Mike didn’t like it; I thought it was too experimental ... I thought people wouldn’t understand where my head was at, at the time.” And maybe he’s right, but we are fortunate to have Brian Wilson still alive to perform and record music that the general public (and numerous musicians and songwriters) can finally catch up to the great genius of his art.

It is ironic that Mike Love holds the rights to the moniker of “The Beach Boys”. Love, along with Bruce Johnston and a new collection of Boys, will be performing two shows (7 and 9 p.m.) on Saturday, June 23, at the Arkley Center for Performing Arts in Eureka. Heroes and Villains, indeed.

If you’re in the mood for something “epic,” but in a vastly different manner, then you will want to check out The Zoopy Show at the Jambalaya, also on Saturday, June 23. With former members of the project The Yard Dogs Roadshow, creator Joe Gelbart (with Speed Levitch, famed subject of the NY documentary The Cruise) presents a multi-media event that features monsters, sci-fi puppets, and Zoopy Girlz (anime-styled go-go dancers), all to a disco/punk/psychedelia beat. The Bucky Walters and Freelove Circus share the bill and a like-minded ethic. God only knows.

Also at the Jambalaya, on Sunday, June 24, local luminary, singer/songwriter and chanteuse Lila Nelson will be opening for the Kitchen Syncopator’s frontman, Gill Landry , who is promoting his recent solo release, The Ballad of Lawless Soirez. Nelson, who has been recording new material in Los Angeles, might be performing some of these new songs. Wouldn’t it be nice?

The Steel Toed Slippers were selected for the first round of a national battle of the bands competition on CBS-TV’s “The Early Show.” Their video will be aired on Monday, June 25, at 8:30 a.m., with two other competing bands. There will be online voting to determine the first-round winner. They want your vote. Hang on to your ego and good luck.