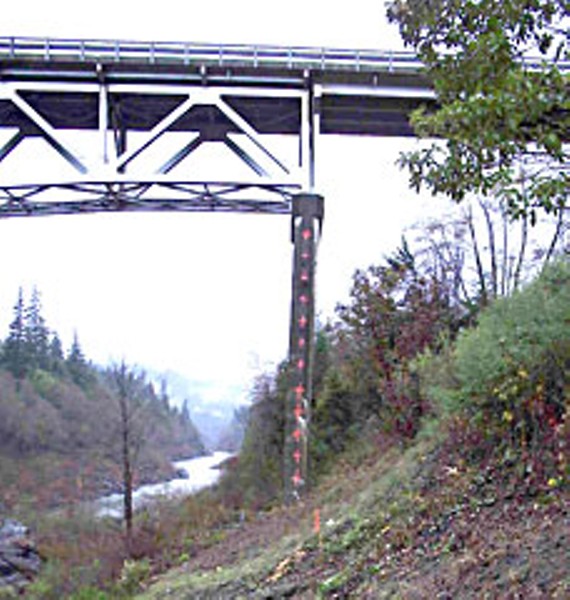 You might think anyone living deep in the Klamath River boonies would be content with a certain degree of disconnect, proud of or at least resigned to the hardship imposed by deep wooded canyons, summer-bake and winter-freeze, rock-riddled roads, simple living and familial rootedness.

For the most part, this may be true. You'd have to ask them. But even the boonies, people — in particular those living on the south side of the lower Klamath River, downstream of its confluence with the Trinity — were happy when they finally got some power lines and telephone poles rigged up. That was just in the past few years. No more expensive radio phones or driving across the Martin's Ferry Bridge to reach one of the lit-up outposts — Weitchpec, Hoopa, Orleans — every time they wanted to phone somebody.

But now, ironically, the Martin's Ferry Bridge has been shut down, declared on the verge of collapse. No cars can cross it. People aren't supposed to walk on it. The school bus stop on the north side has been whisked away to make sure kids stay off the bridge. And with the sudden closure comes a whole new set of civilizational challenges for the several hundred people — Yurok families and other folks — living along the river. Now everyone has to drive 100 extra miles or more to get anywhere, on alternate routes that get mud-mired and snow-choked.

The county bridge is the quickest link to schools, jobs, groceries and more. The bridge connects the Bald Hills Road, on the south side of the Klamath, to State Highway 169 on the north side; 169 heads downriver to Pecwan, and upriver to Highway 96, which takes you either direction to more towns. The route up Bald Hills Road from Highway 101 and over the bridge is also the most direct route between the Yurok Tribe's Klamath and Weitchpec offices. Twenty-one school kids cross the Martin's Ferry Bridge twice a day to get to and from five different schools scattered about the region. Dozens of people cross the bridge daily to get to work, including the six employees of Glen Pitsenbarger's Weitchpec Nursery, on the south side of the river.

"There's nobody working here this time of year, but come the third week of January, we're ready for employees to come back," Pitsenbarger said. He doubts they'll be willing to travel four or five extra hours a day to get to the nursery.

Pitsenbarger said he and his neighbors had about a four-hour warning before the bridge was shut down on Tuesday, Dec. 4. But officials have been eying the bridge for a long time; it's been scheduled for a retrofit since 2002. Tom Mattson, director of Humboldt County Public Works, said although the bridge gets inspected regularly every two years, it was checked again in August after the bridge in Minneapolis collapsed.

Six piers hold up the concrete-and-steel bridge, and Pier 5 was found to be not only cracking but leaning oceanward. "There's a huge hill that's been moving, pushing the abutment, moving the pier," Mattson said. "So we're all concerned, and Caltrans is concerned, it could fall at any time."

About $12 million in federal retrofit funds will be used to stop the sliding hill and install a new pier. On Friday, Dec. 7, the county declared a local emergency, and this Tuesday the Board of Supervisors ratified the declaration and asked staff to draft a resolution requesting the retrofit be sped up, and also requesting that the Governor and the President declare an emergency and send money to help improve the two alternate roads.

Until those roads are officially declared detours they can't be used by the Klamath-Trinity Joint Unified School District to transport kids or teachers, said District Superintendent Doug Oliveira.

"Right now, some families are having their kids stay with relatives during the week," he said. "But one family has talked about taking their travel trailer and parking it on the other side of the river. And some parents have been transporting their kids on the detour roads. And then we have several high school kids already doing independent study. The day after the bridge was closed, they were proactive and signed up."

The Yurok Tribe, meanwhile, has offered to provide tutors and to open up an empty house on their side of the river as an education center.