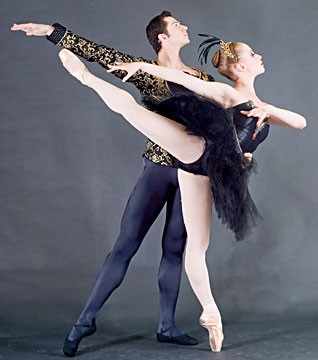 Feb. 17 at the Arkley Center for the Performing Arts

Those of you who went to the Arkley Center for the Performing Arts on Feb. 17 to see Pyotr Tchaikovsky's classic ballet, Swan Lake, might have failed to notice that while you were watching the graceful drama unfold on stage you were part of a parallel meta-narrative. While Prince Siegfried was being duped by the evil magician Rotbart to believe that Rotbart's daughter Odile was the Prince's one true love, Odette, we, the audience, were being led to believe that the troupe we were seeing was the famed St. Petersburg Ballet Theatre, when in fact it was the St. Petersburg State Academic Ballet Theatre.

The real St. Petersburg Ballet Theatre has been inundated with letters from American fans asking about the company's U.S. tour dates. The problem is, the SPBT just wrapped up its winter tour in Great Britain, Paris and Dublin, and now they're on vacation. In order to clear up American ballet fans misconceptions, they've issued an official statement on their website in which they distance themselves from the rogue ballet company that's "touring in American colleges and small arts centers with taped music." Ouch, that stings.

The Arizona Daily Star reported on the mix-up last week after a performance in Tucson. Linda Walker, artistic director for the Tucson Regional Ballet, was at that performance and said, "In three minutes I knew there was something wrong ... They were dancers who were trained, but they were not the St. Petersburg Ballet company. It was obvious."

Gary Lindsey, a San Francisco-based promoter, says the confusion is understandable. It turns out there are four or five theaters performing in the States, each billing itself as the St. Petersburg Ballet.

The troupe that performed on Sunday at the Arkley Center is managed by Columbia Artists. Their website notes that the ballet company's incorporated name is the St. Petersburg State Academic Ballet Theatre, but while touring in Western Europe, the United Kingdom, Japan and North and South America, the company calls itself the St. Petersburg Ballet Theatre.

Still, Lindsey reassured me that the company is hardly second-rate. He said it has a "30-year pedigree." The only problem is that Columbia Artists books five or six performances a week for the troupe, which means the dancers are exhausted, Lindsey said. It turns out Lindsey represented the troupe over a decade ago. Since then he's moved on, but, semantically, he hasn't gone all that far: Now he represents the St. Petersburg Classic Ballet Theatre.

Still, names aside, people seemed to enjoy themselves on Sunday night. Many even gave the company a standing ovation.

And though the dancers appeared to stumble every once in a while — perhaps due to fatigue, rather than a lack of technical ability — the performance had some splendid moments. I especially liked the last act when Rotbart's goons swoosh around the stage flapping their ominous black wings as the delicate Odette and the lanky Siegfried fight against their cruel fate and finally prevail.

If it's any consolation, a friend of my wife who recently moved to the area from St. Petersburg, Russia, told us during the intermission that she thoroughly enjoyed the performance. She looked perfectly ecstatic after the first three acts. Perhaps nostalgia partially clouded her senses, but she said it was just like being at home. Her only complaints were that the stage was too small and that the canned music did a disservice to Tchaikovsky's score.

I had hoped to be blown away by really serious Russian ballet, but Swan Lake is notorious for its different endings, and I went home having learned an important lesson, that not every Siegfried gets his Odette.