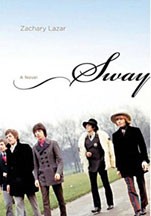 Zachary Lazar's Sway: A Novel is a guide to self-involved characters slopping around in the sexual mud and quicksand of the '60s. All of the characters are members of The Rolling Stones or were associated with them as the 1960s counterculture went the wrong way.

Many had to scream "Gimme shelter!" for real. The '60s ran out of brilliant ideas midway through, and the end of it all is what this novel is about, with the Stones as cultural vortex. Every character is a real person, from Kenneth Anger (the underground filmmaker whose Scorpio Rising was the pinnacle movie about the dark side of hip life) to Bobby Beausoleil (who resided with the Manson family and received a life sentence for murdering another member of the family). But at center stage are the members of The Rolling Stones.

We finally find out exactly how Brian Jones died — except that this is fiction. Numerous early gigs for the Stones are described in maddeningly accurate detail, and they all end in violence, as did Jones' life. At many narrative vectors, the reader suddenly realizes that these are real people doing what they actually did do; however, their interior thoughts and, of course, conversations never took place outside of the book.

In 2008 the gap between lowbrow genres and highbrow writing is wider than ever. English courses in lowbrow novels are offered to keep attendance up; highbrow works of fiction attract only students of literature, and there are fewer than in previous decades. The novel has become the literary battlefield between low and high culture. Sway steps into this fight with pulp fiction in one holster and serious art in the other and stands as the finest gossip and gospel truth regarding what went awry as the '60s turned evil. But Sway also changes the notion of what a work of fiction can be. It challenges the very architecture of the novel. We have real people, real action and real cultural commentary; yet, again, that which creates the book's cultural significance never happened — sort of

This is a novel about true outsiders who went too far outside and could only come back in after being airlifted out of Altamont, while their creations turned out to be the stuff of fallen angels. Quite literally, Hells Angels fell on hippies who were falling on themselves at that famous free concert that ended the '60s' romanticism in a frenzy that, in turn, ended it

all except for those who made it happen.

They go on to wealth and fame, as the song goes. Can you guess their names? Lazar knows that lowbrow fiction is not good for a reputation in academia and that highbrow is not what will bring in money, so he has written a cross-genre novel that winds up making more sense than all of the inane books these days on this band or that doing something or other in the '60s. Take Eric Clapton and his recent tome; nice guy and all, but just a guitar player who happened to survive by accidental means and who still makes Robert Johnson sound awful. But listen to the narrator in Sway talk about Johnson: "It was a folk ballad, minor-keyed and slow. It was more English-sounding than American ... like a dirge. The words ... were a monologue in the voice of the Devil. They spoke of the sway of a sly ... man who in the end was just a bewildering reflection of themselves."

At this very moment, Mick Jagger looks up from the recording session being described and, with Brian Jones and Keith Richards, continues to "sift through the variations ... taking up the song in a completely different style" until it sounds right — until it sounds like a Rolling Stones song that is back-dropped, sly-stepped and brought to life by so much cultural action that the exact meaning of a given song becomes clearer than ever.

There's more intelligence in Sway's fiction than in any music criticism. There's high culture literature in this low culture story. There's more of a novel here because there is none.