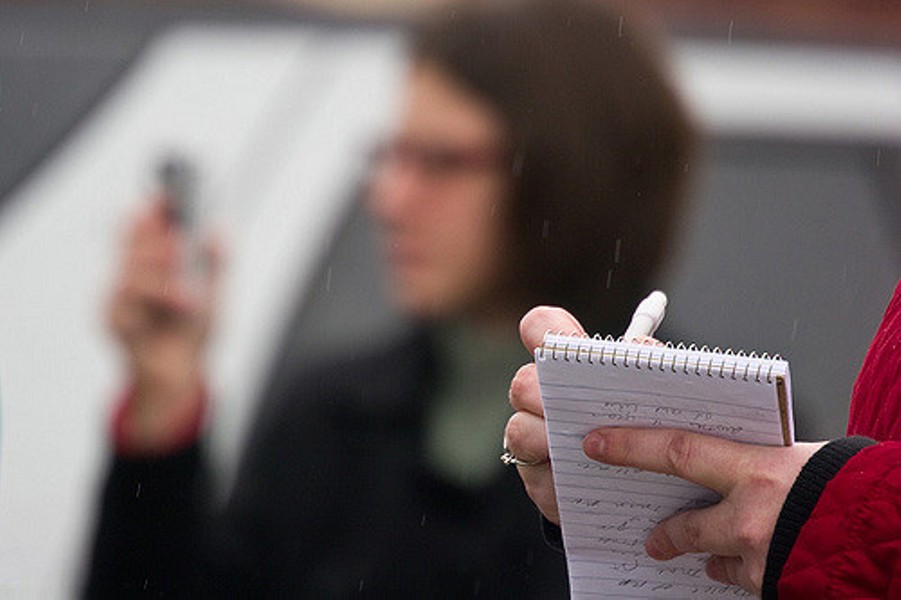 When I check my phone for news updates, all the stories seem like so much noise. I want to shut it all off. There's the report of something Congress didn't do. Then there are the stories on Trump's Twitter response. Then there are the responses to Trump's tweets. Everyone seems to be shouting at each other. Fake news! Pants on fire!

I find myself gravitating toward the local. (Not The Local, although the cozy bar in Eureka was a great place to gravitate toward.)

The news I find isn't positive. On Redheaded Blackbelt, Kym Kemp tells me of a stabbing in Alderpoint. On Lost Coast Outpost, I learn that the State Route 1 turnoff near Leggett is sliding and that a fire burned an old warehouse at the foot of the Samoa Bridge in Eureka. The Mad River Union tells me we won't see any local salmon this year in the market.

But it is real. It isn't politics or sniping or snipes about politics. On Redheaded Blackbelt, I see a story about a Rolling Stone magazine article that featured a local pot grow, followed by a thoughtful discussion thread some 80 posts long about responsible v. unethical grows. It all serves to remind me that while the algorithms that bring me national and world news end up painting a picture of a world gone insane, in reality, we chug along fighting fires when they pop up, fixing roads when they slide and dealing with our environmental problems as we can.

It is important for our national press to hold our national leaders accountable to the truth and to call out attempts to deceive or harm the public. But we tend to undervalue the role of the local press: to keep us grounded in what affects us day after day.

In the journalism industry these days, we say that Trump is our best friend. That's because the craziness in Washington has brought a surge of eyeballs to news sites. Subscriptions are up. People are pouring money into news nonprofits. After years of layoffs, organizations are hiring reporters.

I hope we will see that trickle down to the local level. While people need local press more than ever, there don't seem to be a lot of resources for local press out there. Redheaded Blackbelt remains a one-woman operation. Lost Coast and the Times-Standard still rely too heavily on unedited press releases of police and government agencies. In checking the news Monday morning, there wasn't a lot new. The freshest story on the North Coast Journal's blog was a nice article about bugs in Anthony Westkamper's backyard. I don't think the reason is the lack of news. I think the reason is the lack of news reporters. A long time ago, in newsrooms far away where I earned my reporting stripes, the Sunday and Monday papers were the most important of the week. Someone worked weekend shifts to make sure there was fresh news. But a news organization has to pay people to do that.

This is the time to spend some money on shoe leather reporting. I get my local news off Google News. On the side of my news feed is a little button for Arcata. I hit it and it gives me the latest headlines from the Times-Standard, Redheaded Blackbelt, the Union, Outpost, Journal and HSU's Lumberjack. The fresher the news, the more likely I will click on the headlines. The more fresh news, the more clicks.

I think people turn to national news over local news when they can't connect to the local news. Given the choice between stories about the government taking away health care or coverage of a local car accident, you click on the health care story. But what if the local site ran a story on why an in-and-out visit to the emergency room at St. Joseph Hospital will cost you or your insurance more than $5,000? What's that all about?

That story would get some eyeballs. People ate up the national stories that showed how uneducated our new Education Secretary Betsy DeVos seems to be. But locally, people also ate up a recent Journal story about the battle between Eureka City Schools and a charter school for students and education dollars. What's more compelling than possible, eventual changes to national education standards and budgets, where your kid will be able to go to school next year and how many kids will be in the class?

A few weeks ago, Outpost Publisher Shane Mizer took time out of his schedule to speak to my media management students about ad dollars in news publishing. He told them the Outpost started out as a site subsidized by the radio stations that own it. But now that has just about reversed. People are hungry for news and advertisers are hungry for those eyeballs.

A smart business knows when to invest and when to cut back. In the news business, we have been through a very long period of cutbacks. Maybe the reason so many people were gravitating toward fake news is that the real news business hasn't been giving people much to digest. Eat a healthy but skimpy dinner and you might just end up snacking on Cheetos.

You can't create fiction crazier than the truth. You can't come up with fake stories more compelling than the stuff that really happens to real people. But to find those compelling stories worth reading and seeing and hearing, you need good reporters and photographers and videographers. And those people need to make a living.

Who knows what is happening in Washington behind closed doors? That's all so much craziness and noise. But here we can know what happens around us. Here it is real. Serve it up.

Marcy Burstiner is the chair of the Department of Journalism and Mass Communication at Humboldt State and adviser to the student-produced Lumberjack newspaper which recently relaunched at thelumberjack.org. She hopes everyone will check it out.