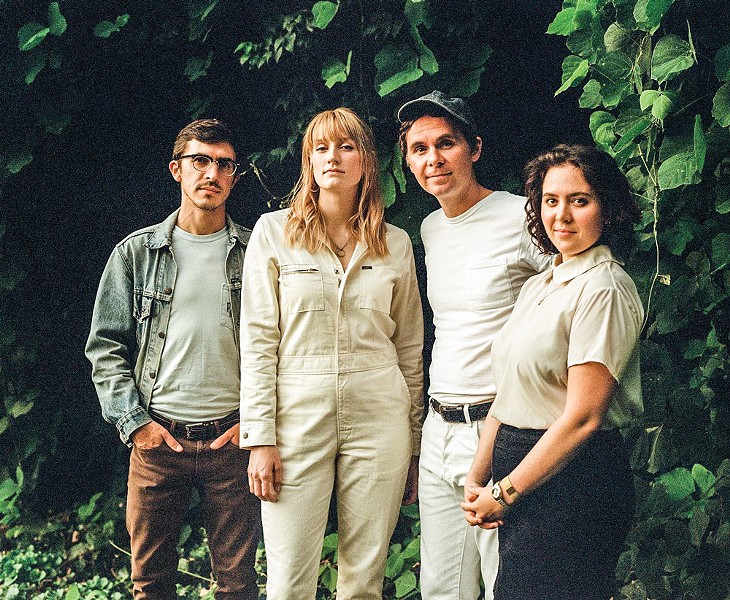 Photo courtesy of the artists Bill and the Belles play the Arcata Playhouse at 7 p.m. on Wednesday, Oct. 26.

I want to do a little housecleaning before the month ends and my memories are lost in the unceasing accumulation of days. First up, I have a hearty thank you to Carol Jacobson and company over at the Eureka Symphony, who put on an incredible opening night on Sept. 30. I had never before heard a performance of Beethoven's "Eroica," and found it absolutely stunning. If you have the chance, do not miss hearing our beloved local symphony this season, it is a source of local pride and Jacobson has an incredible knack for bringing in world-class soloists.

Onward to a different frontier, I want to give a shout out to Riley over at RampArt Skatepark, who let me into his venue to check out my buddy Darren's band Psyop Victim ripping out an inspired set of downtuned sludge music, played awesomely. Chatting outside after the set, I put Riley to the inquisition, all but begging him to send the feelers out and find a way to have one of my all-time favorite bands Napalm Death play there again. If you're reading this, Riley, consider it an open letter, public entreaty.

Finally, I've got to say that I have been loving Arcata lately, particularly at night, where my regular jaunts have been aided by the weather and occasional good company. I've particularly enjoyed my fellow Arcatans' spooky Halloween decorations, which pop up in spots and clusters like a ghoulish pox. I do have a problem with one type of scary decoration (and I'm not talking about those 12-foot skeletons): Even though I am a veteran fan of the macabre, the few Brett Watson for City Council signs I've seen decorating houses are a little too creepy for my tastes. I prefer a different kind of scare.

Berkeley rapper Rexx Life Raj is bringing his downtown soul sound to the Arcata Theatre Lounge to promote his latest release, The Blue Hour. His approach to lyricism involves an uptempo delivery mixed with sung lines for emphasis, a style he has utterly mastered. Joining him are Travis Thompson, Grand National and City Hippie. The pricing structure is as follows: $18 advance, $60 meet and greet VIP, $54 for a four-pack of tickets. Voilà.

The Jam is hosting a wrinkle in the timefield this evening at 9 p.m., an anachronism. It's the wedding of 1950s fashion with hard, modern EDM and drum 'n bass music. City of Boom is the name of the event, and clothing styled in the fashion of that fedora-ed decade is highly encouraged. DJs on tap include Grasshoppa, Kyng of Thieves, Beatrix and more ($10).

Trumpeter Nick Talvola has been cooking something up lately with five of the best jazz musicians in the county, including Shane Fox, who, in addition to being a suave bartender, is an incredible drummer. The sextet, which is rounded out with Russ Thallheimer (tenor sax), Alex Montesdeoca (bass), John Wood (piano) and guitarist Jonathan Townes, has been working on a series of Townes' original compositions, specially arranged for this group to play over a backdrop of vintage sci-fi monster flicks. The whole beast is titled Sounds (Like) A Monster and goes down tonight at 8 p.m. at the Arcata Playhouse. Expect a cabaret atmosphere with tables and cocktails galore ($15, $13 members).

Portland, Oregon, indie folk balladier Casey Neill is a road dog's road dog, having clocked years out there doing his thing. That thing happens to be churning out gritty and passionate songs telling the sort of stories that stir the heart and prime the tear ducts. An early 7 p.m. gig at the Arcata Playhouse is your destination tonight if that sounds like your cuppa tea ($18, $15 for Playhouse members).

Prince Edward Island, Canada, has brought the world a few homegrown treasures over the decades, including Anne of Green Gables author L.M. Montgomery and my long-gone grandfather and middle namesake Edgar Yeo. Add to that list the indie band Alvvays, who, since 2011, have been exciting the world with a dreamy, upbeat sound that helped define the musical landscape of the last decade. If you are among the uninitiated, an excellent example of that sound is the song "Archie, Marry Me," from the group's breakthrough 2014 self-titled record. Tonight, the quintet makes a landing at the Arcata Theatre Lounge (7 p.m., $28), along with tour-mates Slow Pulp.

Following a Twitter recommendation (not always a good idea, by the way), I happened to come upon the song "Hurts to be Alive," the wild first track off of musical comedian and actor Whitmer Thomas' 2020 album Songs from the Golden One. The opening lines hit me in that spot so personally relatable it feels unpleasant, confessional and vulnerable: It fucking hurts to be alive Oh, the disposable fragility of life And my identity is my mother died Anything to distract from being straight and white.

He goes on to talk about how he wants to be fixed by the subject of his desire, even though his "wokeness is a myth." Such eloquent and tragicomic layering is difficult to pull off at the best of times, but this song sure does it., even if I feel a little called out in the process. The Miniplex hosts him tonight, along with indie musician Al Menne ($18, $15 advance).

Bill and the Belles are a stringband quartet from Johnson City, Tennessee, whose music balances the signature harmonies of acoustic folk, bluegrass and Tin Pan Alley jazz with a more modern pop sensibility. Young and full of pizazz, with enough technical ability and music history know-how to pull off a seamless impression of a stringband traveling through the 20th century to present times. Another relative early show (7 p.m.) over at the Arcata Playhouse means that by closing time, you won't be gassed out on hump night ($15).

Collin Yeo (he/him) is a low-rent Quintin Crisp, a dime-store Dorothy Parker, a fire-sale Falstaff. He lives in Arcata, where he can be found spewing bile and shit through a desalination machine set to "mildly charming."