Absynth Quintet's CD party, the Black and White Ball and other post-grad festivities 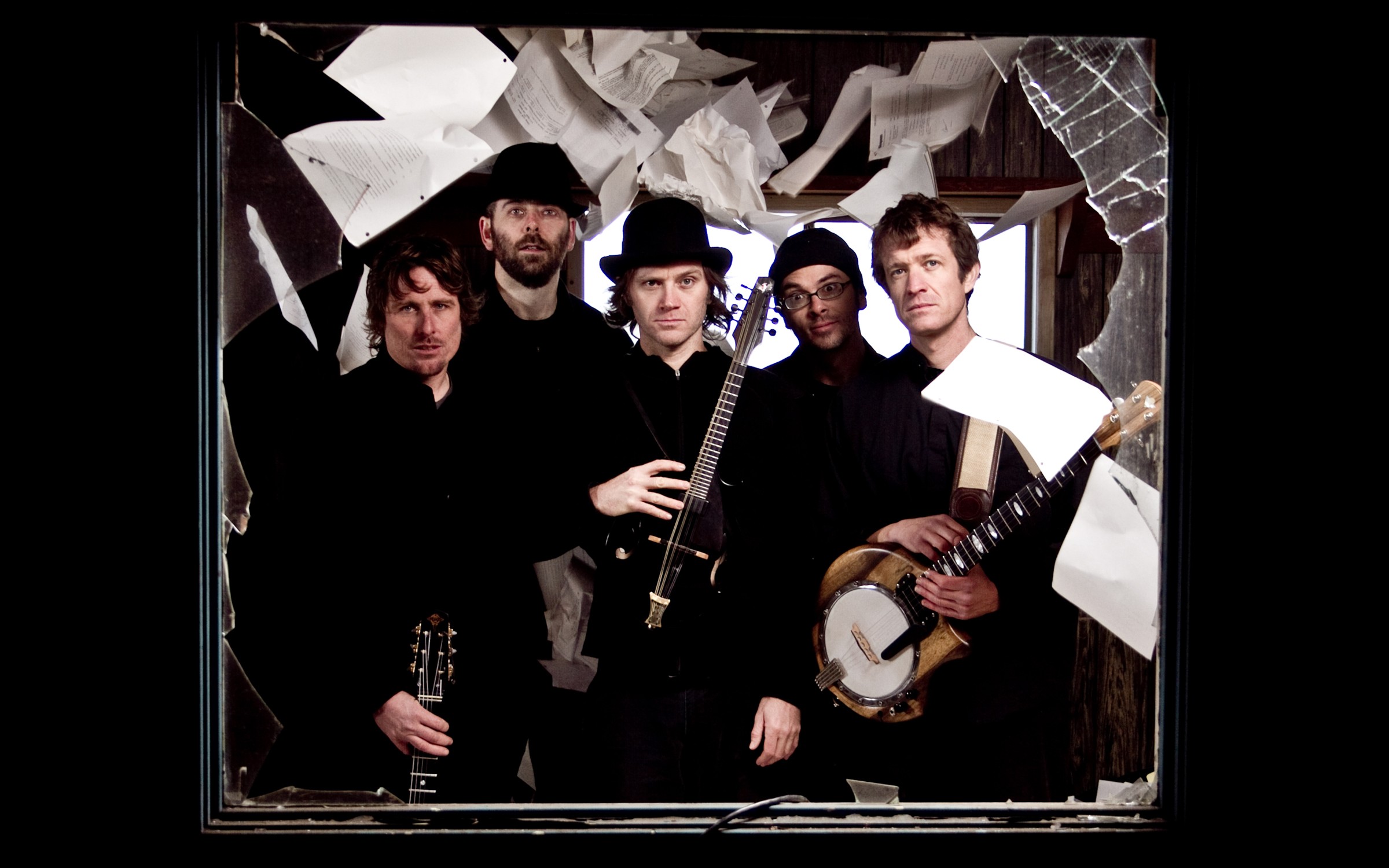 The proverbial CD release party serves more than one purpose. Musicians release their baby into the world, roll out a new product, and with luck sell a few to start making back the money they've invested. They're also released from the pressure that comes with working on a big project.

Iota, the new disc from Absynth Quintet and their third studio album, was a long drawn-out affair. "We started recording a year and a half ago," said guitarist Ryan Roberts. "At this point we have enough material for another album, but when we finished recording it, it was basically our whole repertoire. It took awhile. We did six 12-hour days in the studio in Santa Cruz in October 2009, and we tracked most of the album, then we didn't go back until January 2010. It took all the way until April to get all of us down there [and not all at once]. It only took like 12 days to record it all, but those days were spread over an eight-month period. Then we had to find time to mix it. We finished that in November 2010. Then there was mastering, printing the covers and more. Everything took a long time."

They set up an online Kickstarter fundraising account somewhere along the line and pre-sold the then-unnamed record. (I bought one in advance.) That helped, but since they were "getting it done right," as Roberts put it, everything cost money. Pretty much all that the band was taking in was reinvested in the CD.

Why invest all that time and money into what seems to be a dying medium? "It was an artistic decision. Honestly, it was a horrible financial move; but for us, we wanted to make a real album in a real studio with a real engineer. We could have done it with a 58 and GarageBand in a bedroom, which is what we'll probably do from here on out. But we'd been a band for a long time and we had all this material that just needed to be recorded. Again, financially, I don't think it was a good idea -- I wouldn't suggest it to anyone else," he said with a laugh.

Roberts does see a positive side in this new no-business music biz model. "The Internet and the full meltdown of the business-end have totally democratized things, made it so musicians like us can make a record at home and people will hear it without too many filters. You're not fighting for shelf-space at Tower Records -- they're gone."

The motivation? "At the baseline you have to want to be an artist. That has to be the main driving thing, the thing that fulfills you. If you sat down and wrote a business plan around playing music in 2011, you'd scrap it and go get a day job."

So, on Saturday night, partially in conjunction with the Humboldt Arts Festival, Absynth Quintet celebrates sweet release from the task of making a record, from the bonds of the music biz, and so on by playing tunes from Iota (and some new ones) at the Jambalaya. People will sing along to songs they know. Metaphoric couches will be burned. The Beat Vixens burlesque troupe will add to the fun. CDs will be available on the merch table. Buy one.

You'll find a schedule elsewhere in this paper for the myriad acts planned for the Humboldt Arts Festival's multi-stage daytime/nighttime extravaganza Saturday and Sunday -- way too many to repeat here.

Grad weekend comes to a classy end with the Black and White Ball at the Arcata Theatre Lounge Sunday night. The big name on the bill is Soulive, a neo-old school jazz/funk organ trio with Eric Krasno on guitar, Neal Evans on keys and Neal's brother, Alan on drums. Formed a dozen years ago in New York, the trio hit the upper echelons of the genre, recorded for Blue Note, opened for the Stones, etc. before going more indie with their own label, Royal Family.

Soulive is on tour with a seven-piece funk combo, Lettuce, that includes both Eric and Neal. You might guess it's a spinoff or an expansion on Soulive -- you'd guess wrong. Lettuce actually predates the trio by seven years. The funky septet first came together in 1992 when the members were teenagers and attending a summer program at the prestigious Berklee College of Music. They all dug music by guys like James Brown, Sly, Funkadelic, The Meters, Tower of Power, so they jammed on funk tunes. Later all of them ended up attending Berklee and they resumed where they'd left off. They've reassembled pretty much every year since for one-off gigs and/or short tours, recorded a few cassettes and a couple of CDs. Saxophonists Sam Kininger and Ryan Zoidis toured with Soulive for a time. Now both bands are working their way up the coast together. Local organizers promise "special guests," which I assume means some of the usual suspects of local funk joining the jam. And don't forget to wear black and/or white.

Between HSU graduation and the Humboldt Arts Fest you can expect Arcata to be packed all weekend long. Of course, Friday is also Arts! Arcata, and as usual there's music all over town. The sweet sounds of Pan Dolce Steel Orchestra should fill the Plaza. Jenifer Breeze and her new band are at Arcata Exchange. The Finishing Touches play who-knows-what at Garden Gate. Plaza Design has something called Trio Thirteen. Duncan Burgess plays his jazzy guitar at Libation. There's bluegrass by Clean Livin' at Bubbles. No Good Redwood Ramblers do their old-time thing at Missing Link Records. And on the outskirts of town, Blue Street Junction and Small Axe rock Mosgo's.

Friday, post-A!A you have The Bucky Walters, Strix Vega and Wet Fez offering a multi-genre cross-section of local sounds at Arcata Theatre Lounge, Children of the Sun back from hiatus (something to do with SE Asia) to jam at the Jambalaya, and The Miracle Show doing Dead tunes at Humboldt Brews.

Up from L.A. for a Saturday night show at the Riverwood: The 44's, a blues-roots-boogie quartet with Johnny Main out front on vocals and guitar, Tex Nakamura (formerly of War) on harp and Mike Turturro (from Candye Kane's band) on upright bass. Kid Ramos produced their first album, Boogie Disease, for RipCat, and yes, these cats rip.

Deep Groove's Sundaze at the Jambalaya (on Sunday) features Belgian brothers Patrick and Steve Hoody, aka Electric Soulside playing what they call "techfunk breaks," plus Ganesh Boetsch, aka Love/Life from S.F. (and France) with Gramwich opening.

Bonus offers a double shot of modern Jamaican reggae Tuesday at Arcata Theatre Lounge with the sweet sounds of Shauna McKenzie, aka Etana (translates as "The Strong One"), plus Windel Beneto Edwards, aka Gyptian, two rising stars making their first joint appearance in Humboldt.

Meanwhile, same night at Humboldt Brews, Roger Clyne and The Peacemakers are here from Arizona with a dusty blast of straight-up southwestern rock. Wednesday at HumBrews it's the return of San Fran's genre-hopping gypsy-pirate-polka-mariachi party band, Diego's Umbrella.

Politi-folk songwriter Mark Growden is on the road with a new CD, Lose Me in the Sand, for which he switched from guitar to banjo for the most part to pick a mix of traditionals ("John Hardy," "Shady Grove"), covers (Springsteen's "I'm on Fire"), and originals ("Bones" among others). He's touring with guitarist Jameson Clay; local banjoman/luthier Colin Vance opens their show Wednesday at the Arcata Playhouse. Growden and Clay also play Thursday (May 19) at Persimmons Garden Gallery in Redway.

To the grads: Congratulations! And good luck.