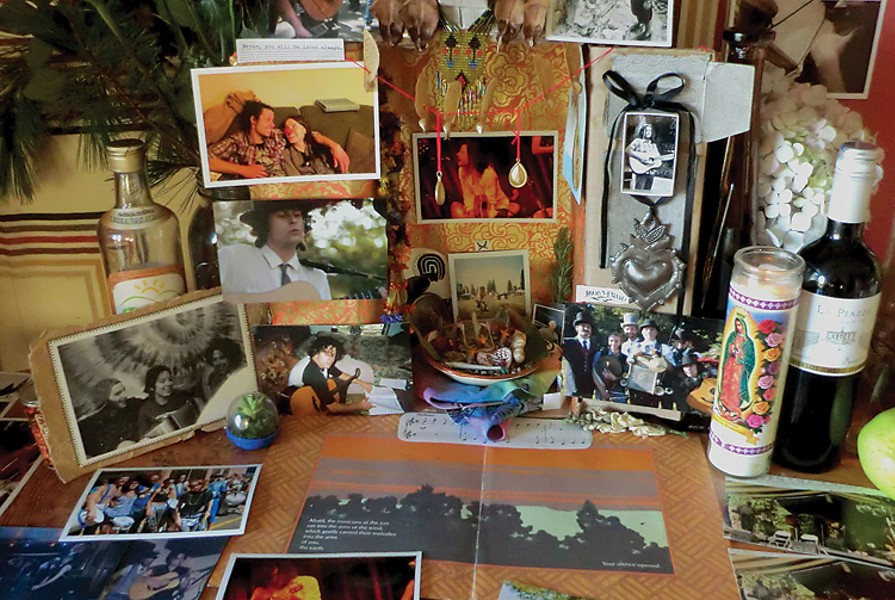 It had been an especially warm and joyful Thanksgiving at his parents' house. In between eating good food and laughing, Bryan and his younger brother, Jason, had spent most of the weekend playing guitars and drumming in the living room, with Bryan's little nephew joining in on the ukulele. Just 7 years old, Victor had learned a few chords from his uncle the year before and was excited to play with the big boys.

After the family weekend, Bryan Osper, only 26 years old himself, got into his green Montero and left El Cajon, taking I-5 north toward his girlfriend's home in Sonoma. Sometime in the early evening on Nov. 28, Osper pulled off the interstate and parked on the shoulder of Copus Road, near Bakersfield. At about 6:15, as he was getting back on the road, he attempted a U-turn and swung right into the path of a tractor-trailer. He died at the scene from blunt head and neck trauma. Though there had been heavy fog that night, the CHP said that wasn't a factor.

Osper's sudden death not only left his family reeling, but ripped a ragged hole in the tight-knit Humboldt music scene he had woven himself into since moving here in 2003 to study journalism at Humboldt State University. Osper was a good writer, and he'd only been playing guitar a couple of years. But in his first week on campus he met the people with whom he would eventually form significant musical bonds that would pull him away from his original purpose. Niko Daoussis. Joey Goforth. Cat Fountain. Melody Walker. Those were just a few. Oh, and professor Eugene Novotney, the leader of the HSU Calypso Band.

Osper had heard there might be openings in the band and showed up at a calypso rehearsal that first week. He asked if he could play, try it out. Novotney let him have a go at the steel drums -- and he was smooth. "I knew that first time I saw him he would make major contributions to the program," Novotney said.

Soon Osper dropped journalism and picked up music. He concentrated on percussion and traveled with Novotney to Brazil and Trinidad to study samba and calypso. By the time he'd graduated from Humboldt State's music program in 2009, Osper had earned a reputation as a bright and exceptional multi-instrumentalist. Novotney calls him the best example of a natural musician. "He could move within and between different instruments with ease and grace," he said. "There was no music that wasn't his friend."

Indeed, to hear friends tell it, Bryan Osper could play any instrument he touched. And his voice was clear, comforting, as if he had a direct connection to a realm beyond.

Besides playing with HSU's Calypso band, Osper was a founding member of the world-dance-fusion band WoMama, played guitar and sang with the bluegrass band The Bucky Walters, and played with Samba D'Alegria, Dun Dun Fare and Bloco Firmeza.

Jesse Jonathon, who met Osper in 2003, said everyone was calling him "hot licks" even back then. Jonathon, a fellow student at the time, had sent out an email to prospective members of a new campus club he was forming, called the HSU Jammers League.

"Bryan was the first person to respond to my email," said Jonathon. The League -- which included Daoussis, Goforth and Fountain, all future Bucky Walters band mates -- played classic Allman Brothers, Led Zeppelin, Paul Simon and Metallica and shined up some of the songs for performance. The league members thought Osper a brilliant guitarist. "He was the go-to rock God," Jonathon said.

Osper's prowess developed rapidly and he became much more than a rock guitarist and percussionist. Melody Walker recalled the first time the Jammers heard him sing. He performed the Talking Heads' "Cross-eyed and Painless" and blew everyone away, Walker said. "Here was this guy who up to this point I knew as just a very good rock-and-roll guitar player," she said. "Then he sang. It was just like David Byrne. Flawless. I got to see him blossom as a singer, songwriter and bluegrass guitarist." Walker and Osper remained musical collaborators; recently, Osper performed as a guest musician on Walker's forthcoming 2012 release Gold Rush Goddess.

Two days after Osper's death, friends and fans gathered in the afternoon at the "Bucky" house, where the band practiced. They were dazed, their eyes tear-blurred. People had been coming and going all day. In the kitchen there was an altar of photos, candles, notes and mementos. Lauren Smith had left a tiny mbira, an African thumb piano, as an offering. The house swelled with laughter and sobbing, then fell silent. Then swelled again. They were telling Bryan stories.

Goforth recalled how, after The Bucky Walters played the North West String Summit in 2007, the band had mistakenly left Osper behind at the festival. An hour into their drive home, he said, he got a call from Osper. "And he's still there, and know what he's doing? He's washing dishes. He was washing dishes and helping clean up." Everybody laughed. Then Daoussis noted that, when they were on tour, they never let Osper drive the van. Friends agreed he wasn't the best driver.

Fountain, the Bucky Walters' back-up harmonizer and harmonica player, said the last time she saw Osper, a couple weeks ago, he was teaching a friend of hers to play ukulele. Osper sat and wrote for an hour, she said, creating a little book of chords and ukulele tips. Then he showed her how to play them.

Osper's girlfriend of four years, 22-year-old Sophia Mackell, recalled that Osper was very sentimental. She said he liked to tell people about the time he first met her, and he'd written poems and notes about it -- in them, Mackell is shimmering in the sunlight. "I was in the art quad wearing a big, plate mother of pearl necklace, and he turned and saw how the sun shone on the necklace," she said. "And he always liked to say how that was like Heaven bringing me to him." Mackell paused, took a breath, then sobbed, "He was the kindest, gentlest, most passionate person I ever met."

He was a sweet, sweet boy, said George Osper, Bryan's dad, on the phone last week. "When he was 2, I was in the Navy," he said. "I will never forget when I had to deploy and my wife was crying and holding Bryan in her arms. He was patting her arm and told her, 'It's OK, Mommy, it will be OK.' He was a very sensitive and empathetic soul."