The story of a rock and roll medicine man 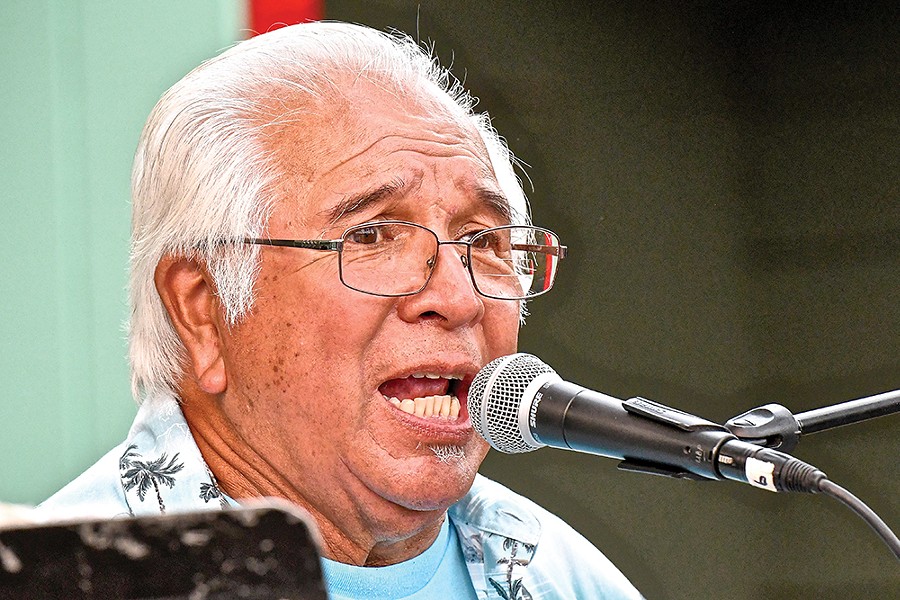 Photo by José Quezada Merv George served as the front man for The Merv George Band for the better part of six decades. 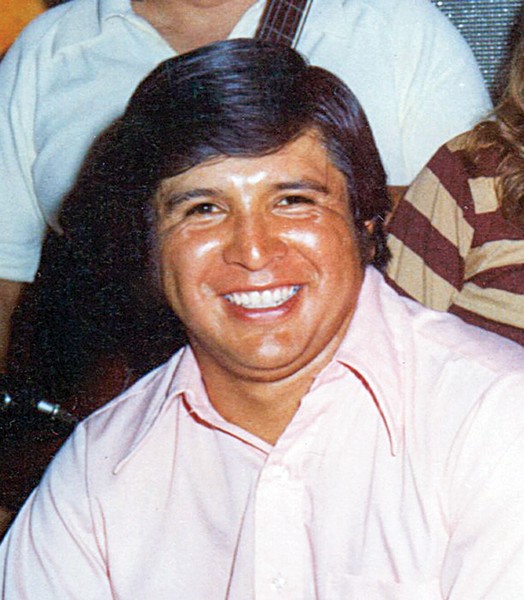 Submitted Merv George retired as a maintenance supervisor in 1998, after 30 years of working in the Eureka Public Works Department.

Submitted The Merv George Memorial Music Fund has been set up through the Humboldt Area Foundation to honor George's memory by promoting music education for school-aged children throughout Humboldt County and especially in the Hoopa Valley.

Submitted Famous for his easy smile, Merv George was a righteous savior of old traditions who could blend them with the new world dawning. 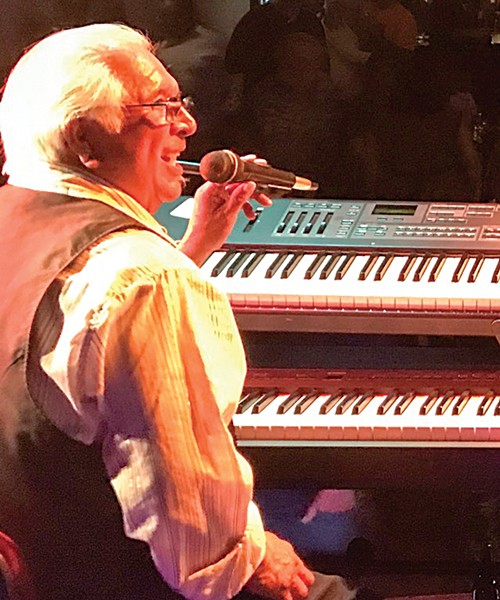 Submitted Widely known for his performances at weddings, festivals, concerts and fairs, Merv George was also a beloved Hupa spiritual and dance leader.

To say that Merv George was a local legend is an understatement. He was a man who led by example. He stood out among his peers as the righteous savior of the old world who could blend it with the new one dawning. His main passions in life were his music, his family and his traditional beliefs as a Hupa tribal spiritual leader. He lived his life blending two worlds that were indeed disparate but his ability to navigate that duality is what made him unique. His canny ability to make people feel at home and his calming presence showed what a grounded and respectful person you were in company with.

A dedicated family man is one appropriate way to describe George. He relished the time spent with his children and grandchildren, volunteering many hours to help coach baseball, softball and track. He was often the chauffeur to many of the activities throughout a hectic week jammed with multiple games and events.

After suffering a severe stroke, George died Aug. 31 at the age of 74 while being transported home from Redding Mercy Hospital. "He had my mom by his side and he went peacefully," George's son Merv George Jr. wrote on Facebook, adding that his father "waited until we got near Weaverville and could see the Trinity River before he left us."

George grew up in a time when the two worlds were crashing together. It wasn't always good to be an Indian and his generation was encouraged to move out into the world and blend in to make life easier for their children than they'd had it at home. My mom is close in age to George and was raised only speaking English so she could be understood and move ahead in the Western world. But at home, she only heard the Karuk language of the elders who raised her. People in this generation were torn between the divergent concepts of what it meant to be successful in terms of being a Native or in living at ease in the outside culture of Western society.

I first heard George and his soulful style of rock and roll when I was a senior in high school. I had just moved to the Hoopa reservation and our house was adjacent to the tribal headquarters. One Friday night, my window was open and I heard that Merv George magic dancing its way to my house from some fundraiser he had been hired to play next door at the neighborhood facilities. As a DJ at KIDE, the tribal radio station, I would play his music on air, frequently getting requests to spin his tunes. Listening to the laid-back melodies and his dulcet tones was truly a breath of fresh air.

My first Merv George dance, I didn't even get inside the venue. The party had spilled into the parking lot and we sat in the cab of a truck sipping brews and listening to the melodies floating on the warm summer breeze. My cousin thrust his head out of a window and yelled, "Katamiiin," the name of our Karuk Village, even though we were deep in the heart of Hupa tribal territory. Fortunately, the camaraderie of the music and dancing prevailed over tribal animosities.

With a trademark twinkle in his eye, George would greet you with a quick smile and make you feel like a lifelong friend. He would ask about your job, your family and your health. He would listen with genuine interest, a people person to the core.

I was the chairman of the parent advisory committee for Northern Humboldt Unified School District. Among the many projects and activities of the program, the parent committee awarded an annual scholarship to one American Indian graduate of McKinleyville, Arcata and Six Rivers Charter high schools. We would raise money in small chunks doing the regular bake sales, Indian taco sales, car washes, candy bar sales and the like. It was tedious and time-consuming, and it took all year to raise enough money to give out a respectably sized scholarship. I was tired of constantly figuring out ways to raise funds.

I thought one big event would be a better use of the efforts of the parent committee. We decided to ask George to play for a Valentine's Day dance and "Swerve with Merv" was born. We solicited donations from local businesses for a silent auction, booked The Merv George Band to play at the Blue Lake Casino, sat back and watched the money flow in. People came from all over Northern California, many trekking long distances to hear one of their favorites do what he did best. We made enough money in one night to raise the amount we gave in scholarships and increase the number we gave out. It could not have happened without the discounted fee George charged us.

He believed in the power of education and used his drawing power to help our parent committee make college affordable for a few Native students. George also supported students in the Northern Humboldt Indian Education Program for several years. The program would arrange for students to take a field trip to attend the Jump Dance and Boat Dance ceremony in Hoopa. George always made a point of taking a break from his duties as dance leader to greet the incoming students and educate them about the ceremony they were attending. According to his wife Laura Lee George, who is Karuk, George felt American Indian education encompassed much more than just the physical presence of the school.

"Merv believed that education in general was important in today's world to make a decent living. ... Indian education included knowing about one's own heritage and the intricacies of tribal traditions, beliefs and practices," she said.

George worked in Eureka's Public Works Department for 30 years before retiring as a maintenance supervisor in 1998. He also believed in the power of the ceremonies of his Hupa people. He was a dance leader, trained by his great Uncle Rudolph Soctish, to perform the sacred rituals of his Native ancestors. As a regalia owner and ceremonial head man, he would spend countless hours making sure the ceremonies were completed according to tradition and done in the best way possible to help the people throughout the new year. The world wasn't renewed until George said it was done right.

He worked hard to incorporate the teachings of his elders into the ceremonies he was now responsible for holding. He helped revive the local young woman's coming of age ceremony known as the Flower Dance. He felt it was important to depict the nuances of his belief system to the broader world, which ultimately led to his and several members of his family being consulted as curators when the Smithsonian Institution opened the National Museum of the American Indian in 2004 and included an exhibit on the Hupa people and culture. According Laura Lee George, the exhibit is still on display today.

When you start to ask community members about George, you quickly get a feel for the impact he had on the local scene.

Karen Skoglund, a Hupa tribal member, recalls many good times throughout her life when George would play and the community would gather to socialize and have fun together. Her daughter had him play at her senior prom and pronounced it the "best dance ever."

Elizabeth Lara-O'Rourke, of Yurok, Hupa, Karuk and Chilula ancestry, spoke of the generations of people who would come together. When her family heard there was a chance to get down and boogie with George and the boys, they would plan a mini family reunion and gather a group of all ages who enjoyed listening to this special person play the tunes they loved. Her favorite memory is dancing with all the men in her life at once, her father, husband and son surrounding her while George's sweet voice hit all the right notes to keep the house a rockin'. She remembers listening to his music as her mother Delores Moon Mercado bought 8-tracks of his songs and would remind the children that he was their cousin on the Moon side.

Playing music gave George a certain notoriety in the local community that would often follow him wherever he happened to be. Finding himself at a rest stop one time in Utah, he was noticed as the dance floor king that he was by the Fat Albert's Restaurant T-shirt he wore from a venue back home in Humboldt County. He never learned to read sheet music, he just relied on a natural gift of perfect pitch to learn the music he heard around him. He took his love of music seriously and shared it with the community on many occasions in many venues. As the "free" entertainment at the county fair, he would draw almost as many people as the headliners charging big ticket prices. He was always a popular choice to play at a wedding reception (sometimes for more than one by any given individual, depending on how many times they got married). He never had a set playlist, preferring to read the crowd and take requests of favorites from his huge catalogue of songs he'd made his own.

"Merv was a professional musician and powerful Native American ceremonial singer in and around the North Coast of California for 60-plus of his 74 years of life," she said. "Music was a constant, steadying, healing force throughout his life. In all of its forms, he believed it provided healing and calm in chaotic times. It was a way to bring happiness and smiles to others and thus, in turn, to himself. In his own life, music enabled Merv to overcome bullying, racism and prejudices he encountered in his journeys. He recognized the therapeutic power it held so he always made sure his own children and grandchildren and their classmates had access to instruments, music sheets, recorded music lessons, PA systems, and of course live music."

To carry on George's legacy of helping children to learn and enjoy the power of live music, a fund — The Merv George Memorial Music Fund — has been set up at the Humboldt Area Foundation to bring instruments, music instruction and appreciation, to promote live music and bring music education for school age children in Humboldt County, primarily in the Hoopa Valley.

Profits from the sale of A Celebration of Merv's Life CD will go into the fund. Other tax-deductible donations can be sent to: The Merv George Memorial Music Fund, Humboldt Area Foundation, 363 Indianola Road, Bayside, CA 95524.

George's family invites the community to join them for a celebration of his life at 1 p.m. on Oct. 21 at the Bear River Event Center. As his daughter Jennifer George wrote, "May his music live on in all of your lives and bring you the same joy that it brings me."

André Cramblit is a Karuk tribal member and is grateful to have been mentored by his cousin Laura Lee George. He enjoyed dancing to The Merv George Band and will miss his presence at the annual "Swerve with Merv" fundraiser.