In seconds, local rivers can turn recreation to tragedy 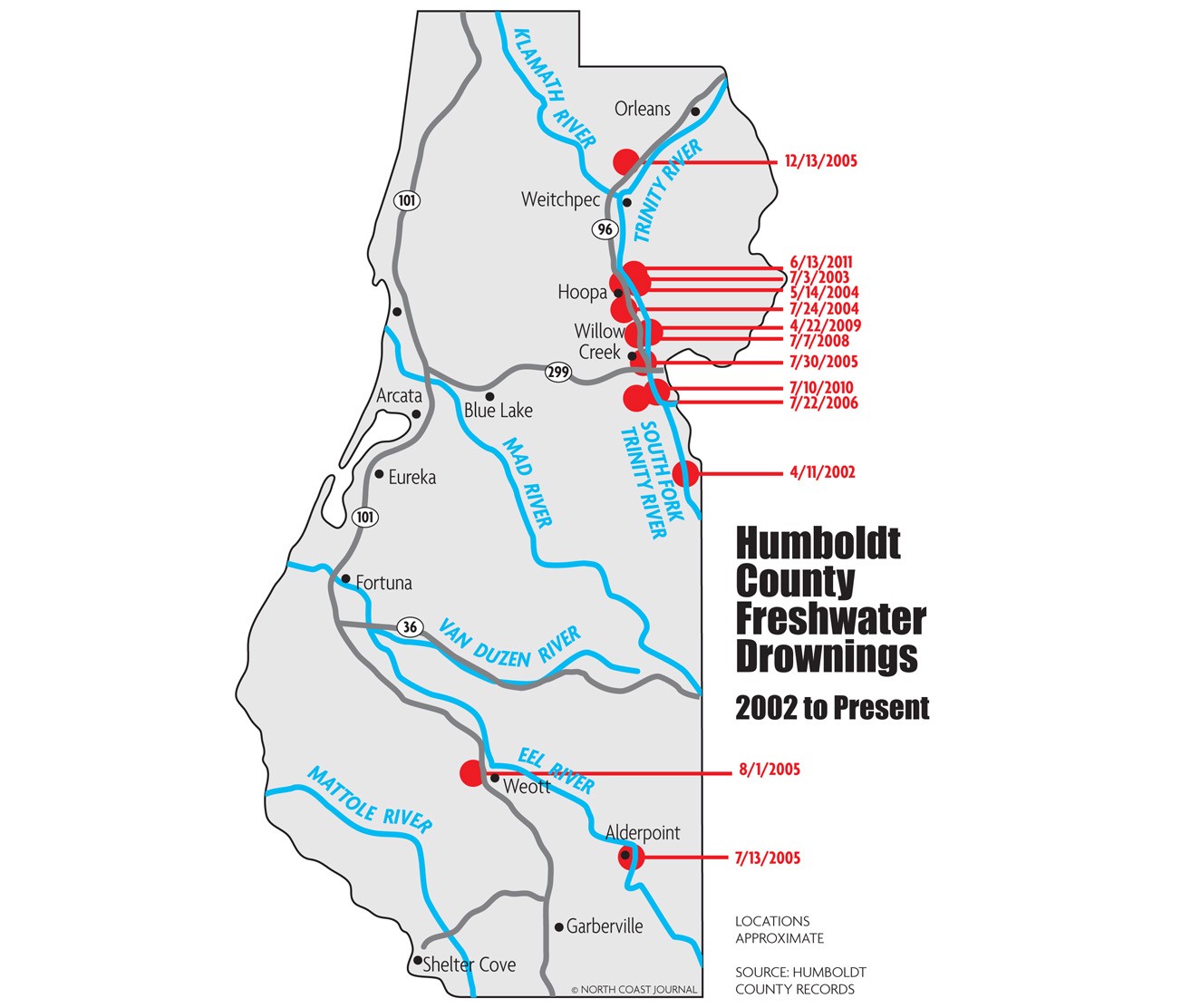 It's happening again. The boats, motoring slowly, carefully along the Trinity River, their crews scanning rocky banks and swift eddies. The Coast Guard helicopter sweeping above. Parents or friends, sisters or sweethearts, waiting. It's all happening again, and it is almost certain to end badly.

As surely as June brings sunshine to the pine-studded slopes and muddy beaches of the Trinity River, someone wades in and does not come out.

"We had a Coast Guard man get drowned in that river. We've had a Forest Service firefighter drown in the Trinity. They were in good shape. ... That river is cold and fast. It's deceptive," said Lt. Steve Knight of the Humboldt County Sheriff's Office.

Knight last week had the dark job of briefing reporters on the search for the latest young man to disappear into the Trinity River, a 21-year-old biology student from Humboldt State University.

As of late Tuesday afternoon the body of 21-year-old Jian Kang from Renqiu, China, had not been found. Rod Mendes, the director of the Hoopa Valley Tribe's Office of Emergency Services, called Tuesday afternoon to say there will be an update on the search this Thursday at noon.

Although Humboldt County borders a long and popular coast, and has kept a vestige of commercial fishing, one of the most dangerous occupations in America, the county's rivers are lethal more frequently than its seas.

Nearly twice as many people have died in freshwater in Humboldt County since 2002 than in the ocean, according to the Humboldt County coroner's annual summaries. Coroner's records showed 22 freshwater deaths, 12 in salt water, and a handful either unspecified or in bathtubs.

No breakdown was immediately available on which rivers were the deadliest, but those involved in search and rescue say they go most often to the Trinity and the Klamath. If they search the Klamath less frequently, it's perhaps only because so much of it runs through neighboring Del Norte County.

Both rivers are swift and cold, fed by dams that release water from the cool depths of reservoirs, said sheriff's Sgt. Phillip Buihner. Both have treacherous spots. The Klamath is threaded with "strainers," fallen trees or debris that can catch and trap people under water. The Trinity's whirlpools can grab even a strong swimmer and not let go.

Biuhner has spent the last decade with the sheriff's special services office, which handles everything from boating safety to rural crime to search and rescue. He's seen too many searches, too many bodies. On the beach, it's the sleeper waves. In the rivers, the Trinity especially, it is overconfidence that kills.

"People are usually out trying to swim with friends, but they don't realize how cold the water is and how fast it's moving," he said. "I just don't think they estimate the power and the conditions of the river itself. There's a lot of dynamics in that river. There are eddies and undertows and everything else in there."

In a region known for its rivers, sheriff's officers said, the Eel, Van Duzen, Mad and Mattole are tame by comparison. They tend to run shallower and warmer in the summers, sometimes with lower water quality, Knight said, so they attract fewer swimmers.

By comparison, the Trinity is a clean, deep river, free of blue-green algae blooms and the accompanying public health warnings for people and their pets to stay out of the water. It runs through the county's heat-soaked interior, beckoning those who cannot face another foggy day. And its banks sometimes broaden into comfortable beaches, with restrooms and other facilities nearby.

"Tish Tang, Big Rock and VFW Park in Willow Creek, those seem to be the three areas where we have our most incidents," said Buihner. "They've all got a relatively nice beach on the river, flat and sandy, where you might have a picnic or something."

In his years of rescue work, the sergeant has seen other sad patterns emerge. Casual swimmers are likelier to drown in the Trinity than rafters or kayakers, who come prepared with life vests and other safety gear. And men drown much more often than women.

The coroner's annual summaries often include gender, but not always. Of those freshwater drowning victims listed by gender since 2004, two were female and 15 male.

"The male gender, I don't know ... " Buihner said, his voice trailing away. He sighed, as only the father of a 16-year-old son can sigh.

Many of the drowning victims he has helped search for were young, sometimes deciding at the spur of the moment to swim. Some, like Kang, waded in where it was shallow, and didn't realize how uneven the riverbed can be. Where Kang went into the Trinity, at Tish Tang, the bank drops sharply away from a shallow spot.

"You just lose your footing and it's like trying to climb up a tall sand dune, except it's underwater and you can't see it. And then you're in the current," Buihner said.

He and Knight said the best way to stay safe in the Trinity - or any river - is to know your own capabilities, know the river, avoid alcohol and never go into the water alone.

For his own son, Buihner has an even stricter rule.

"Just a week ago ... he wanted to go to the river with some friends and my wife and I said ‘No. No river.'

"I'll take to him the lake, but I don't want him on the Trinity River."