Switching up the Recipe 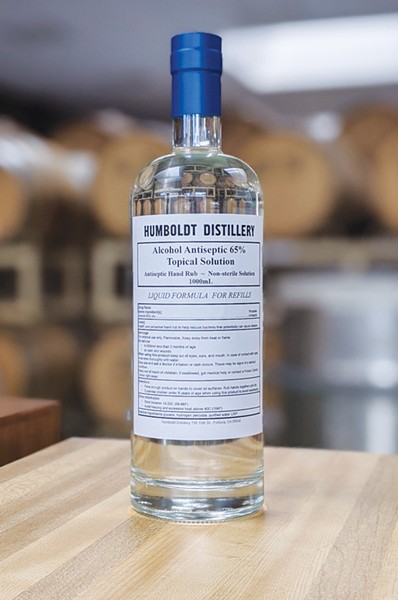 Barbara and Michael Jewell are still selling Jewell Distillery's moonshine, vodka, gin and local blackberry liqueur out of their Blue Lake shop, but they've added a new item to their stock: hand sanitizer. As California residents shelter in place to slow the spread of COVID-19, "We wanna make sure you're internally and externally sanitized," says Michael over the phone.

"Obviously, we like everyone else heard there was a shortage of hand sanitizer and we considered making it, but we weren't allowed to do so," he continues. But when the Food and Drug Administration and the Alcohol and Tobacco Tax and Trade Bureau temporarily relaxed their restrictions on who can produce the sprays and gels two weeks ago in the face of a national COVID-19-driven shortage, the Jewells jumped on it.

They started by hunting down the ingredients, including glycerine, isopropyl and ethanol alcohols, and hydrogen peroxide. "Every day [they're] getting harder and harder to find," says Michael, as more people are making sanitizer. Barbara adds that sale-approved bottles (8-ounce and smaller, HDP or PET plastic) are growing scarce, too. But while they can, they're selling to their neighbors in Blue Lake who show up mostly on foot, wait 6 feet apart outside the shop and pick up bottles of spray, which goes further than gel, for $1 per ounce.

Barbara uses the same spray to wipe down credit card signature screen after every purchase. "We feel safe so far," she says, adding that she tosses a bottle in with her home deliveries of gin and vodka, too.

The Jewells considered distributing outside Blue Lake but are holding off. "Now we're finding just locally the need is such that we need to supply our hood before we go out of the area," says Michael.

The World Health Organization recipe the Jewells and other distilleries, like Arcata's Alchemy Distillery, are following is the gold standard. It requires at least 160 proof alcohol, meaning spirits that are at least 80 percent alcohol. For comparison, the highest proof Everclear you can get in California is only 120 proof, or 60 percent.

After Googling the recipe, Amy Bohner, who co-owns Alchemy with her husband Steve, says, "I realized I could use some high-proof alcohol that we already had in stock." The first batch went out to their other business Alchemy Construction's employees, postal employees and other essential workers. Once the shelter-in-place order was announced for Humboldt County, the pair decided to halt production of their Cereal Killer rye whiskey and use their pot-bellied steampunk-looking copper still to make an 85-proof alcohol to be used in making sanitizer.

The next batch will take a couple of weeks, as the Bohners are working from scratch, fermenting grain and distilling it four times for four to five days at a time. "We have the one batch we're already sitting on and we get bottles next week," she says. As soon as it's labeled, it'll go to more essential workers. "We will only do this as long as we can afford to donate it," she says, adding that as a two-person operation in their indefinitely closed tasting room, they're doing their best to shelter in place and aren't prepared to sell to the public. (Amy tells the 20 or so folks who email her daily to head for Murphy's Market in Sunny Brae, where Bubbles is distributing its locally made sanitizer.)

Similar concerns about running back and forth to the distillery during shelter in place led Jackie Moore of Humboldt Craft Spirits, maker of Blue Lake Vodka, along with gin, rye and a chocolate liqueur, to halt her micro-batch production of sanitizer. Moore had made a few gallons of sanitizer for Coast Central Credit Union, where her husband is the CFO, but aside from occasional help from family, she's mainly on her own at the Eureka location and has decided to stay at home until the order is lifted.

In Fortuna, Humboldt Distillery, which is coming up on its seventh anniversary making organic vodka and rum, as well as a hemp-infused rum, is pumping out the largest volume of sanitizer from a local spirits producer. "We're constantly dealing with high-proof alcohol," says owner Abe Stevens. "As soon as those regulations were changed, we switched gears, put our vodka products on hold and switched to hand sanitizer."

It took some Facebook crowd sourcing to find a stash of hydrogen peroxide from a hydroponic gardening supplier and glycerin, which Eureka's Tickle Soap donated. "We've got a decent volume of high proof alcohol on hand and it takes about a day to make it," says Stevens, and bottling takes about three days. "We're making approximately 250 gallons per batch." The Fortuna Fire Department got a few cases, some of which came in relabeled 1-liter vodka bottles. The fire department will distribute the donated sanitizer to essential workers south of College of the Redwoods, while the Humboldt County Office of Emergency Services will share the wealth north of the college.

Stevens says demand for craft spirits has slowed with restaurant and bar closures, so he's not falling behind in production. "Fortunately, our facility is almost 7,000 sqare feet so we're able to maintain appropriate social distance" he says, explaining that he has six or seven people working there on a given day, so he feels producing the sanitizer is safe for him and his employees. He's hopeful what they're able to churn out will make a dent in the need.

When he first posted on social media that Humboldt Distillery was making sanitizer, "the number of inquiries we got was sobering." He's also hoping people remember the best thing they can do to prevent the spread of COVID-19 is to wash their hands.

"Hand sanitizer," he says, "isn't a substitute for good old soap and water."