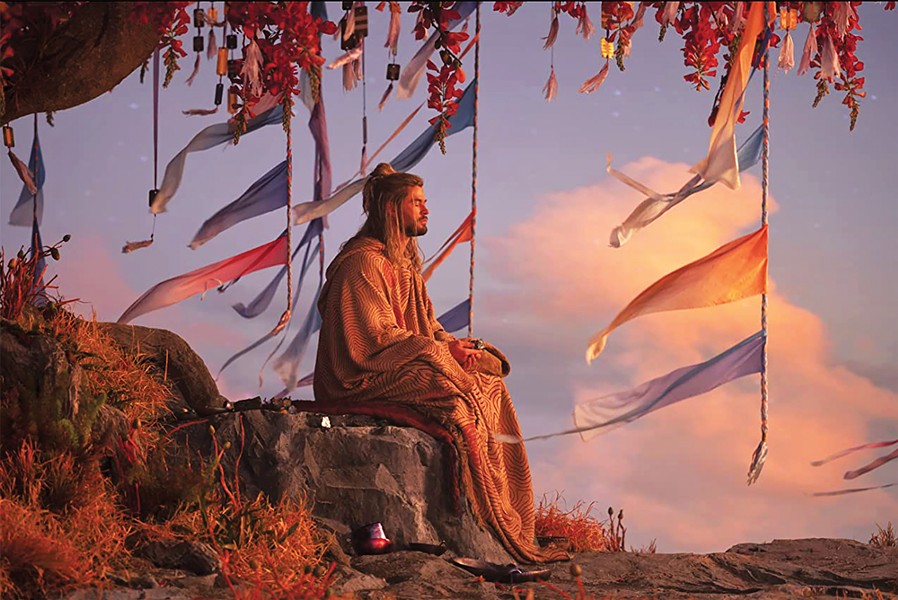 Thor: Love and Thunder He's a 10 but he's always hanging out on the plaza.

THOR: LOVE AND THUNDER. As I lay in the emergency room on July 3 — with a non-explosives-related digital wound, as I abhor cliché — writing about a Marvel movie was perhaps the furthest thing from my mind. Realistically, I was probably busy scrambling for hand-trauma jokes (Will I ever play the piano? What about my career as a hand model? My editor's gonna kill me if I can't hammer the F key like I'm supposed to!), none of which I delivered and all of which would have withered before the hilarity of the P.A.'s pronouncement of, "You're not going to like what I have to tell you."

Near-amputations notwithstanding, I don't dedicate much idle time to daydreaming about the MCU; other than the copious outpouring of lamentation and regret laid out almost weekly in this very forum.

In my (indefensible) defense, time has proven Thor movies outliers among their dour, joy-consuming kin, which is the predominant reason I've developed a soft spot (my head) for them. Unlike the immovable bulk of most of the MCU, Thor has taken on an unexpected, dynamic arc. In the beginning, his story was as archly self-serious — falsely Nordic, maybe — as they come; I mean, Kenneth Branagh? Over time, though, Chris Hemsworth's hero has emerged as the goofiest, most gleefully unaware of the bunch, so much so that these movies stand almost completely apart from the rest of the "canon."

While I would like to imagine this is due, at least in part, to a degree of cleverness and self-effacement on the part of our otherworldly physiqued star (see Spiderhead for more evidence of this), the traits and tropes that make the last couple Thor pictures so endearing are very much trademarks of their driving creative force, burgeoning media impresario Taika Waititi.

And yes, in case any of the faithful have read this far, we must of course give credit to super-producer and demigod Kevin Feige, under whose aegis all things superhero-y are made possible.

Anyway, Waititi made the unlikely, fortuitous leap from directing episodes of Flight of the Conchords, Eagle Vs. Shark (2007) and What We Do in the Shadows (2014) — one of the greatest movie comedies of the century, incidentally, with a follow-up FX series that rivals it, note for note — to helming Thor: Ragnarok (2017), a delightfully candy-colored departure from, almost-inversion of, the standards and practices of the franchise. Ragnarok introduced an element of silliness, but also a gentle, unafraid vulnerability to the works that grounded, tempered and humanized the whole affair. It posited the notion that the MCU could make room for humor not reliant on a certain star/protagonist's quick-witted snark, while simultaneously debriding much of the forced green-screen gloom that defines and degrades its counterparts.

Worth noting here is the fact that Waititi has spread his influence all over mainstream media of late, vying for Oscars with JoJo Rabbit (2019), fancying-up pirate lore in Our Flag Means Death and exercising his off-set acumen to engineer a deal for writer-director Sterlin Harjo. That last collaboration has yielded the series Reservation Dogs and, hopefully, forced a foot into Hollywood's doorway for movies and television by and about Indigenous people. Which is, of course, a topic worthy of greater and more intelligent exploration than I'm likely capable of.

And so, in a roundabout way, we arrive at Thor: Love and Thunder, wherein our hero gets himself back to fighting trim and proceeds to bounce around the universe with Valkyrie (Tessa Thompson), Jane Foster (Natalie Portman), Korg (Waititi) and occasionally the Guardians of the Galaxy in pursuit of a justifiably pissed-off apostate called Gorr the God Butcher (Christian Bale), who has abducted the children of New Asgard to bait his trap.

There's some heady stuff about fallacies of faith, the inevitability of endings and the importance of engaging one's own weakness here, all cleverly incorporated into a jaunty, fairly gay adventure with Guns N Roses all over the soundtrack and some ingenious nods to the delicious '80s channeling of '50s set-piece grandiosity. It may not be perfect, inasmuch as it cannot complete dispense with its provenance (if only!), and my appreciation of it might have been enhanced by pain management.

But the fact remains that this is a subversive outlier, bold and brightly arrayed, right in the middle of the big, dark Marvel universe. Which is a surprisingly hopeful thing in frequently hopeless times.

PONYO. Hayao Miyazaki's dreamy animated fantasy about an undersea princess who longs to be human and befriends a little boy. G. 103M. MINOR.

WHERE THE CRAWDADS SING. A girl who grew up alone in the swamp in North Carolina is embroiled in a murder. PG13. 125M. BROADWAY, FORTUNA, MILL CREEK.