Take Off Your Skin 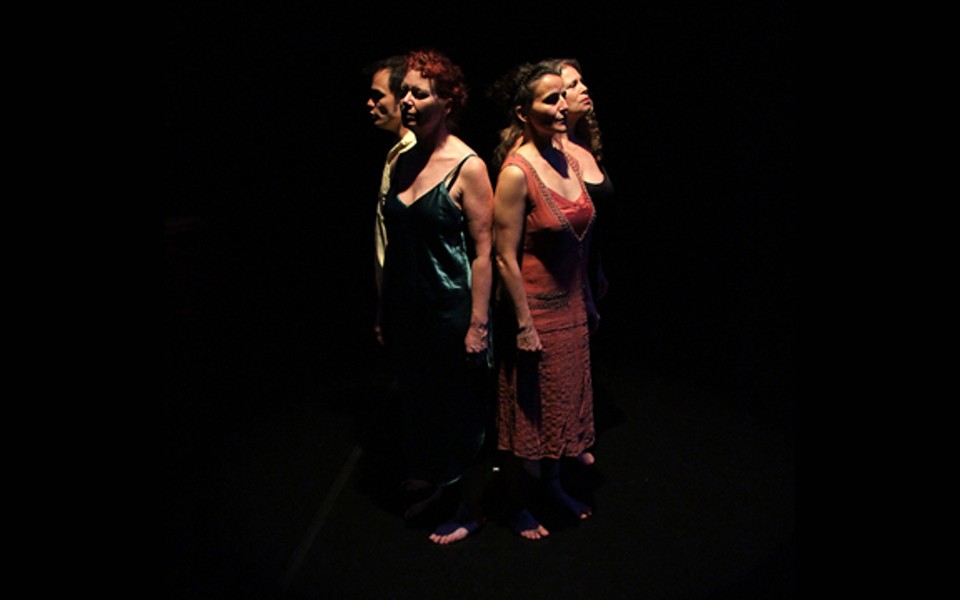 photo by Tim Gray Take Off Your Skin cast

Beginning in the dark, a voice out of the silence, "This strange ecstatic dream... ." Laura Muñoz, director of Take Off Your Skin, a modern dance piece integrating live music and spoken and sung words of poets Walt Whitman, Hafiz, Lalla and Rumi, fearlessly messes around with all these elements. The atmosphere created is alluring. We want in. We'll follow these people wherever they're going.

One can feel Bonnie Hossack thinking as she dances, thinking the dance, maybe the steps themselves sometimes, but thinking the secret thoughts of the dancing. Matt Chapman's commitment to being fully present in the movement is direct, his intentions clear. Muñoz' stage presence is open and grounded. Musician Marla Joy becomes more than an accompanist -- she is an intricate member of the dance. Designer Spike Foster's lighting seemingly casts firelight around the stage, shaping it intimately.

When dancing to silence or not dancing directly with music it is paramount for the choreography to have a strong internal rhythm, like the internal meter of free verse, changing but ever present. A lot of the partnering in the piece was even, not enough push or drag or suspension. It is tricky territory when the work kind of follows a narrative, but isn't tied to it and isn't linear. How does the work make sense without making literal sense? Work like this has its own logic, which it often found, but at times fell short of finding.

Yet Muñoz is onto something. She is not afraid to experiment. She creates an atmosphere. She draws you in. You want to know the story. Small choices are made carefully; two women simply kneeling, backs erect, facing slightly different directions can mean so much, be so beautiful, like Matisse, the contour of the body, profound without definition. Muñoz directly confronting the audience, "We're going to talk about love tonight; we're going to talk about love tomorrow night, too." Hossack bending over making her bottom a table for Chapman to slide off. Later, the gesture and response repeated. Chapman thrusting out a shoulder, giving Hossack a place to lean, she relaxes into it, exhaling with a sigh. We know how good it must feel to be given support, relief, even for a moment. Chapman extols Muñoz to hide her love. Her body downcast and reprimanded. Everyone talking at once, then a strong gorgeous ending that stuck.

Muñoz has worked successfully with large groups at Dell'Arte. Her strength in this piece was the unisons. I'd like to see more group work from her -- there were certainly plenty of dancers at the show. My hope is that modern dancers come out of the woodwork here in Humboldt and start making and being in work. It's an art form we're missing up here in paradise.