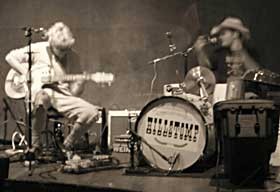 A sticker on the new live CD byHillstomp describes them as a “bucket and slide duo,” a phrase that might be confusing, unless you’ve seen them play. Guitarist Henry Christian bars chords with a slide made from a metal tube. Drummer Johnny “Buckets” Johnson has a kit made mostly from plastic buckets, the kind you find in a restaurant kitchen. As the two musicians explained in a call from the front porch of Henry’s place in NE Portland, the band’s history goes back about five years to when Henry figured out how to reproduce the raw blues style he heard on some records he’d discovered by the late great Mississippi Fred McDowell.

“Once I realized he was playing in an open tuning with a slide, it got easier,” said Henry. And that’s when Johnny joined the fun playing buckets he appropriated from the seafood joint where they were both tending bar. The result was a rollicking, raucous sound they initially called “punk blues,” and eventually the pleasure of quitting their day jobs to become full-time musicians.

The After Two But Before Five album mixes blues classics like “Rollin’ and Tumblin’” and “Stewball” with original neo-old-time blues like “NE Portland 3 a.m.,” where the singer is “running from the ghosts again,” and finding there’s “nothing sweeter in this world, than a blue-eyed Carolina girl.” Distortion in the mic furthers the impression that the music comes from some ancient source rather than a couple of modern young guys.

Their aim? “First and foremost we’re trying to show people a good time,” says John. “We make people feel good dancing their asses off so they can go home happy — but there’s more to it. We’re trying to take something old and make it new again in terms of music, in terms of the crap we play on and all that.”

Last time Hillstomp hit town it was opening for Devil Makes Three at the Jambalaya. This Sunday, Oct. 14, the Oregonian duo returns to the Jam as the headliner. Local honky tonk heroes Rooster McClintock open.

Also in the business of taking old music and making it new: Uncle Earl . The red-hot all g’Earl old timey/bluegrass band returns to HSU Tuesday, Oct. 16, for a show in the Kate Buchanan Room that will probably highlight tunes from their latest, Waterloo, Tennessee , named for a metaphoric town that may or may not exist. Local faves Huckleberry Flint open.

Another sort of duo, Gutpuppet , plays Thursday, Oct. 11, at Muddy’s Hot Cup. The two guys from L.A. describe themselves as an “Indo-swami-bluegrass-gypsy-raga-country-blues experiment.” Translation: Scot Ray plays Indian-style rags on various slide guitars, including one with 22 strings, while Bill Barrett adds color with his chromatic harmonica.

The music/dance review called Swing Night at the Blue Light pairs the dance troupe Rhythmically Challenged (the kids you’ve seen executing impressive swing-era dance moves) with the jazzy local band Magnolia . While the band learned seven tunes from the R.C. dance repertoire, the dancers choreographed seven of Magnolia’s original songs for the Thursday, Oct. 11, show at the Arkley Center. Sound like fun? It’s for a good cause: Making Headway’s work on prevention and treatment of traumatic brain injury.

Dominic Castillo and the Rock Savants from San Luis Obispo play sunny indie rock at the Jambalaya Thursday. Castillo studied jazz at Berklee and classic literature and philosophy elsewhere resulting in smart sounding songs. He notes that, “the jazz and the books, the punk rock of my youth and Mom’s soul music, all these apparently disparate elements seem to come together when I’m writing and recording.” The Common Vice opens the show.

Jambalaya follows last weekend’s musical benefit for the Northcoast Environmental Center with yet another: Friday, Oct. 12, featuring the David Jacobs-Strain Band . If you caught David’s solo set at Blues by the Bay, you’ve probably told all your friends that this kid can slide around on a guitar and sing with the best of them. He’s even better with his band — his set at the Summer Arts Fest at Benbow knocked me out. He’s got deep roots in the blues idiom, but he’s moving ever forward, taking the music into new realms. Recommended.

Note that Friday is also Arts! Arcata. Among the musical offerings: ShinBone playing rhythm and blues at Plaza Design; a trio called The Sidekicks playing country-ish music at Arcata Exchange; flutes and jazz from Northcoast Prep kids at the Presbyterian Church, and a double-bill at the Metro with Fred and Wilma and No Not Yet . They urge you to bring your arty self down to the Plaza: “C’mon out and put yo hands in the air! Or sit down and nod knowingly. Or just sit there in an arty kinda way...”

Also on Friday: A house party where the arty Starving Weirdos share the bill with yet another Ecstatic Peace band: The Magik Markers . Yes, the same wild duo with a cut on the CD that came with McSweeney’s summer issue of The Believer . E-mail starvingweirdos@yahoo.com for show location.

Classic underground Cali hip hop is in the house at the Red Fox Friday night with the “ Over 30 Dirty Old Man Tour ” featuring Tre “ Slimkid3 ” Hardson and Derrick “ Fatlip ” Stewart (both from The Pharcyde), plus Omni , aka “The California Kid,” Nathan Nice,DJ Cee Brown and DJ Twist One .

Ready to do-see-do your partner? The Striped Pig Stringband plays for square dancers Saturday at Jambalaya with fiddler/caller Michael Ismerio in from Portland for the occasion and for a repeat next Saturday, Oct. 20, at the Arcata Vet’s Hall. Incidentally, if you saw Striped Pig’s set at the North Country Fair (which was almost like busking since the stage wasn’t ready for them) you might have noticed that banjo player Jason Romero was not with them. He was up in Canada scouting out a place to relocate his banjo shop. He found one. He’s back for now, but not for long. Catch him while you can.

Across the Plaza at the Alibi that night it’s Southwestern glam pop by The Foxx from Albuquerque with Juliet Legend on vocals and guitar, and (at least for this tour) former local Dameon Lee of Lowlights/Letdown fame. They’re here with Portland power pop quartet The Neat , who claim to “harken back to the days when rock ‘n’ roll was king and the bad boys always had a soft side.”

The promo package from Portland’s Professor Gall grabbed my attention, but not exactly in a good way. The band’s new CD was taped into a black plastic foam meat tray along with a (fake) hypodermic needle and a little plastic bag of some unknown white powder. A card identified this as “Professor Gall’s Reincarnation Kit” and offered instructions that I did not follow except for the part about putting on the copy of the album, Intravenous Delusion . (OK, I get it.) Apparently Prof. Gall is the alter-ego of Drew Norman , guitarist/songwriter for another Portland band, The Cow Trippers. Here he plays banjo and several other instruments on dark songs vaguely reminiscent of Rain Dogs-era Tom Waits, but slightly perkier and with occasional twang. Saturday Prof. Gall plays the Logger Bar along with resident troublemakers The Rubberneckers plus two more Blue Lake bands on the theatrical side: Tainted Zucchini and The Brendas (the latter borrowed their name from the Logger’s bartender).

The folks from the Forks Lounge in Willow Creek call the all-day rock show there Saturday a “ Harvest Party .” Rhythm Method , TheKent Stephenson Band and Jimi Jeff and The Gypsy Band play outside from noon on. Things move indoors at 6 with St. John and The Sinners followed by Taxi . Additionally, as St. John explained in an invite, the inside portion is also a “Pagan/Wiccan rock ‘n’ roll wedding party” for St. John Hunt (son of notorious spy and Watergate/JFK conspirator E. Howard Hunt) and his betrothed, Mona Arnold of Arcata. Congrats! And rock on!

The Red Fox has Lotus , a 5-piece electro-jamband from Philadelphia who cross genres, melding rock with drum ‘n’ bass, dub and trance to draw in the dance club crowd.

And last but certainly not least, at the Jambalaya, The Soundcatcher Tour featuring the incredible DJ Vadim , a Russian-born, London-raised, New York-based producer/turntablist, plus his wife, Yarah Bravo , a spoken word artist born in Sweden to Chilean and Brazilian parents, and Abstract Rude from L.A. of Abstract Tribe Unique and Haiku D’Etat fame. Supporting acts include Pugslee Atomz of the Nacrobats crew out of Chicago and 3WS . Be prepared to be amazed.