Restaurants and staff are trying to minimize COVID-19 exposure 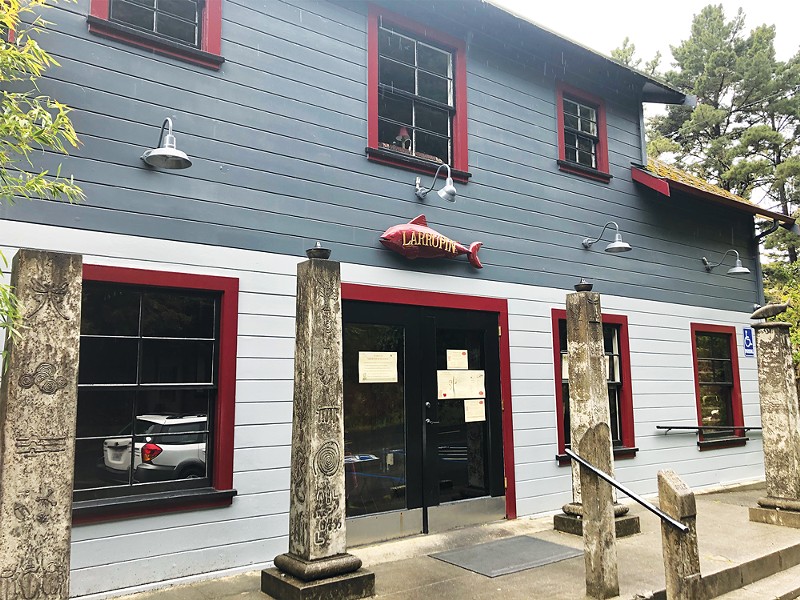 Photo by Jennifer Fumiko Cahill The closed entrance to Larrupin Café, with its take-out menu and pick-up instructions posted on the door.

Picking up something to eat? Protect yourself and food service workers:

• Remember: Contact increases risk. Act like you have the virus and try not to spread it. • If you feel at all unwell, stay home. • Order and pay online or over the phone, tip included. Avoid cash transactions. • Tip generously — food service workers are risking their health to feed you, often with inadequate health insurance. • Wash and/or sanitize your hands before accepting your food. (Would you lick your steering wheel? Sanitize.) • Wear a mask or face covering to reduce your chance of passing infection, even if you don’t have symptoms. • Waiting in your car? Tell staff to leave it on your hood and get it when they leave. • Wipe down and sanitize the outsides of containers, and transfer food to your own clean dishes at home.

In the Friday afternoon lull between lunch and dinner, Eduardo Lopez still has to put the phone down to help customers at Toni's 24-hour Restaurant. "It's enough to keep us busy," he says. Despite the suspension of table service under the COVID-19 shelter-in-place order, he says, "we'll get our rushes around regular times."

Restaurants offering only take-out or curbside pick-up service are considered essential businesses under both state and county shelter in place orders. And while many have gone into a pandemic-related shutdown, some are running with skeleton crews to pass food to customers with as little contact as possible. The City, a nonprofit reporting outlet, ran a startling piece on how New York neighborhoods hit hardest by COVID-19 — with nearly double the infection rates of the rest of the city — are in Queens, where service workers in "construction, food service, janitorial services and other jobs that continued well into the outbreak" reside, bringing their exposure into sharp focus.

The more contact — with money, with people and with any surfaces they might touch — the riskier it is not only for customers but for staff, who serve dozens of people a day as officials urge the rest of us to hunker down and isolate at home.

Humboldt County Public Health Officer Teresa Frankovich said when people consider heading to a restaurant to get some takeout they should think about the intent of the shelter-in-place order.

"The intent of shelter in place is to create as a much distancing as possible and to limit the number of times you are outside your home," she said. She hopes people will plan, shop and prepare meals at home as much as possible during this, as making more trips out "only increases their exposure and community exposure." But Frankovich added she appreciates restaurants providing an option for people who either cannot cook at home or are out working essential jobs all day.

Lopez, who just turned 18, has been at Toni's about a year and a half, doing "a little of everything," from prep and serving to dish washing and making milkshakes. Since shifting to takeout, there are just three or four workers per shift, down from the usual six or seven. And now his duties include running orders out to cars.

Customers place orders by phone (some from the parking lot) and 15 to 20 minutes later they come in and pay. If food isn't ready, staff, wearing rubber gloves, will run it out to the customer's car and hand it over, which means breaking that 6-foot boundary. Walk-ins wait in their cars or under the awning at the restaurant's entrance, where a sign lets them know they can't congregate inside.

Lopez says the staff tries to maintain distance and since there are fewer of them, they mostly stay the recommended 6 feet apart. But, he admits, "Because it's a small kitchen, we have to pass by once in a while." Once clocked in, Lopez says workers wash and snap on gloves, and they're fastidious about wiping door handles, register screens and the ATM.

The afternoon Lopez spoke with the Journal, Frankovich had just announced her recommendation that everyone wear masks or other face coverings when on essential trips out of their homes. The staff hadn't yet adopted the practice, which is not yet included in the Department of Health and Human Service's guidelines for businesses, but Lopez said he was starting to see more customers with their own gloves or masks, "maybe a bandana or something like that."

Lopez says concern for others fuels his vigilance. "I'm ... a younger worker; I'm not too concerned about it. But I try really hard to keep clean myself. ... Even if it wouldn't be that bad for me, I worry that I can get it and it would spread through me."

For now, he's "just grateful that some of us workers still have a chance to provide for our families."

The phone is ringing at Larrupin Café, too, where floor manager Kathy Carpenter is busy taking orders for pick-up and delivery. To minimize contact, she encourages people to pay by credit card over the phone. That allows her to peek out from the restaurant and — with gloved hands — drop bagged dinners on a bench out front as soon as they call to say they've arrived. There's a jar for cash payments and tips, which she says have been good. "People have been super, super generous," she says.

Owner Paul Fitzgerald is handling deliveries to Trinidad, Arcata and McKinleyville himself, texting when he's en route and wearing gloves to leave the meals on customers' doorsteps, unless cash has to change hands.

"We have a very small staff so we're able to maintain social distance," says Carpenter, who's one of four on for the evening, including her boss — a far cry from the two-story Trinidad icon's usual staffing. "We have a pretty spread out kitchen and we have two chefs and I'm picking up orders," she explains.

A staff of four isn't unusual for Surfside Burger Shack, says co-owner Amanda Fernandez, who hasn't had to lay anyone off. It's an advantage that keeps the overhead low in uncertain times and it allows the workers to keep their distance in the small but open kitchen. The cook works at a 6-foot grill and prep happens in a separate area. Still, she says there are times when passing one another in a 2-foot space is unavoidable.

"We've outfitted every staff member with N95 masks and gloves. We had some [masks] in our woodshop at home," she says. "From the moment we walk in to the moment they walk out, they're wearing those N95 masks and gloves." Fernandez says she also gave them cloth masks donated by the Mask up Humboldt Facebook group to use on their own time. Closing Tuesdays to "do a huge deep cleaning" and stepped-up sanitizing of every surface have become the new norm.

Surfside customers call in their orders and pick them up from the inside counter or a table outside. "We just kinda bag their food up, set it down and step away," says Fernandez. Staff also run bags of burgers out to customers' cars, which means getting within arm's reach, sometimes, she says, leaning back and away as best they can. In those moments she's grateful for the masks.

The tips have been good, even if she suspects some folks just don't want to touch their change. And Fernandez is cautiously optimistic about the future. "It's gonna be difficult but because we have such a small crew, I think we can make it. ... [we're] adapting on the day to day, which is just normal life but pandemic style."