Tales from the Madaket

Slideshow Tales from the Madaket 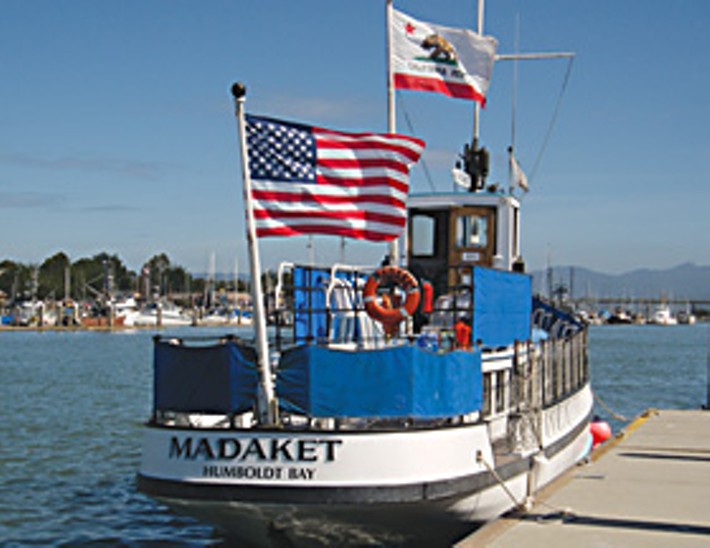 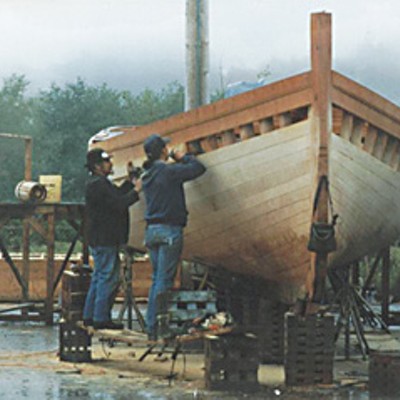 The Motor Vessel Madaket harbors a veritable boatload of stories in its weathered Doug fir planks. From 1910, when she was built, to 1972, when the Samoa Bridge went up, the Madaket (originally named the Nellie C ) ferried scores of mill workers and their families and other folks back and forth between Samoa and Eureka and other points along Humboldt Bay.

“We’ve had over 400 millyards on Humboldt Bay since white settlers established here 150 years ago,” said Janet Wood on Monday afternoon, sitting with Dalene Zerlang on the sun-drenched deck of the Madaket , docked at the end of Commercial Street in Eureka. The now-community-funded Madaket runs as a harbor cruise boat these days — for birthday parties, class reunions, nature excursions, harbor district meetings, you name it.

The Nellie C with captain, circa 1910

On June 6, 2010, this last of the bay’s ferry boats will be 100 years old. She’s the oldest passenger vessel in continuous service in the United States. And her keepers — her crew, volunteers and the Humboldt Bay Maritime Museum — want to throw the old gal a party. They also want to collect stories and photographs from folks who’ve crowded onto the 12-foot-by-49-foot Nellie C/Madaket over the years. Wood, who crewed this summer on the Madaket as deck hand/bartender and became so addicted to the lifestyle that she’s stayed on as a volunteer, is helping Zerlang of the Humboldt Maritime Museum organize a “Hundred Years of Madaket ” bash. She says all Madaket memories are welcome, whether they’re from that drunken get-together a few weeks ago, or from everyday travel in decades past.

“We had an elderly gentleman in his 80s who came on board, and he was telling me he used to ride this boat everyday,” said Wood. “He had his three daughters and his granddaughter with him, and while the captain was up there narrating, he was down here narrating his own stories. He said he’d ridden it when he was a kid — when he was a teenager he lived in Eureka and he was dating a girl over in Samoa. And he almost started crying when he saw the postcard showing what she used to look like.”

“There was a baby born here,” added Zerlang. “He’s still alive; he lives in Ferndale.”

“Some of these guys who come on board, the ones around 50 years old, they say things like, ‘I used to take the Madaket every day to Samoa to ride my bike and play on the beaches,’” said Wood.

Zerlang, who’s been on the phone with her husband while we talk on deck, hangs up and says, “His name’s Tony Leonardo, the guy who was born on the boat.” Apparently, Tony’s pregnant mom was en route from Samoa to Eureka to the hospital but Tony was in a hurry.

Yep, all kinds of stories lurk about this boat. One day, said Zerlang, as she and a crowd of tourists were at dock waiting to depart for a cruise, they watched as a naked woman leaped from the Samoa Bridge. “We untied and took the boat over to pull her out of the water,” said Zerlang. The poor woman, however, swam to shore; the Madaket crew supplied her with a blanket.

But about that baby, Tony Leonardo — that’s sure something, to be born on such a narrow little boat, probably crowded with dusty millworkers and whatnot. Quite a tale. Tuesday morning, Tony Leonardo wasn’t home to relate the story of his origins, but his wife Gerry was.

“Actually, that’s a tall tale,” she said. “He was born in Samoa in ’33 — at home. His mother worked at the Eureka Inn. And she used to ride the Madaket acrcoss the bay from Samoa.”

Gerry Leonardo said about five years ago, her husband was gabbing with some crab fisherman at the foot of C Street, and he told them the whopper about his being born on the Madaket . The story rapidly became legend and now even the Madaket crew believes it. “It’s not the truth,” said Gerry. “These guys just like to joke.”

Well, tall tales, real tales, whatever — the museum and Madaket folks want to hear them. You can e-mail your memories of traveling on the Madaket to 100yearsmadaket@gmail.com or send them to P.O. Box 282, Samoa, CA 95564. Send photos, too. And, adds Wood, let her know what sort of celebration you’d like to see in 2010.