How scientists are coaxing 2,000 years of climate data from the ancient redwoods 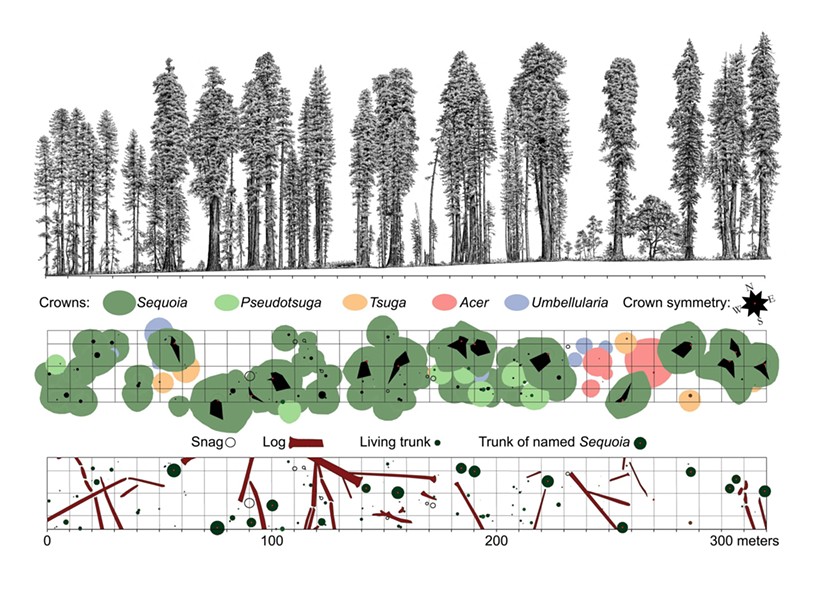 Courtesy of Save the Redwoods League Cross-section and overhead maps on research plot.

Redwood trees have a variety of ways to make you feel insignificant. There's their height, of course, and nowhere is that more true than in Rockefeller Forest, the tallest forest on the planet, where more than 140 Sequoia sempervirens, or coast redwoods, top the 350-foot mark. (That's 80 percent of all 350-footers worldwide.) Then there's the giants' age, and again this grove, located west of Weott in Humboldt Redwoods State Park, provides an excellent example: The largest contiguous old growth redwood forest on earth, Rockefeller encompasses some 10,000 acres teeming with towering, resolute titans, some of which predate Christ.

Nevertheless, the sensation of insignificance they produce in us may be an illusion. Here in the 21st century, human activity is affecting these silent sentinels like never before, and the sentinels, in turn, have begun to break their silence, thanks to a small group of conservationists and scientists using cutting-edge technology to decode the information stored in the trees' trunks, branches and leaves. Initiated by the nonprofit Save the Redwoods League, the Redwoods Climate Change Initiative is a three-year, $2.5 million collaborative project between U.C. Berkeley, Humboldt State University and state and federal parks, with funding help from some conservation-minded philanthropists. Scientists from various disciplines are coming together to study the effects of climate change on both the coastal redwoods and Giant Sequoias. Several of those scientists, including Humboldt State University's pioneering redwoods superstar, Dr. Steven Sillett, gathered last week at a research plot in Rockefeller Forest to explain the project's scope, methods and goals.

"We're facing an unprecedented time in the history of the Earth right now," said Dr. Todd Dawson, a professor and researcher from U.C. Berkeley. Yes, he acknowledged, trees this old have certainly survived dramatic climate fluctuations in the past. But the changes they face today, including pollution, habitat fragmentation, invasive species and heretofore unknown pathogens and pests, are creating extraordinary environmental impacts. And redwood trees, like perhaps no other organisms on earth, may help us to understand and even predict those impacts, Dawson said.

The scientists are studying 16 plots, roughly two acres apiece, at 13 protected sites across California, from Freeman Creek Grove in Sequoia National Park to Jedediah Smith Redwoods near Crescent City. The scientists plan to study every inch of these plots, from the fallen trees decaying on the forest floor to the highest branches and deepest tree rings in the canopy above. "We're measuring everything that's measurable," said Save the Redwoods League Executive Director Ruskin Hartley.

This meticulous scrutiny is intended to produce baseline measurements against which all future changes will be compared. Yet the research has already shattered a few commonly held beliefs about these ancient trees. For example, previous scientists have noted that as coast redwoods age, their annual growth rings get progressively narrower and their upward growth slows. Their conclusion: Big trees don't grow much. "Nonsense," Sillett scoffed. "Absolutely hogwash. It's completely false." What was missing from previous equations was surface area, he explained. "What we're finding is that as redwoods and other trees get taller and older, the rate at which they produce wood increases linearly. So in fact, the oldest and biggest redwoods in this forest are growing the fastest." If you're interested in, say, trees' ability to sequester carbon (and thereby slow the rate of global warming), this is valuable information indeed. "Trees store all of this information in the wood," Sillett added with a rare, childlike smile. "It's awesome."

His colleague, HSU biological scientist Allyson Carroll, has learned how to pinpoint and cross-reference tree ring dates by aligning the patterns found on extracted cores. At lower levels, where core samples have been taken in the past, the haphazard flutes, buttresses and fire caves found in redwood trunks have made tree-ring analysis largely an educated guessing game. Carroll's work is helping scientists reconstruct climate history with unparalleled accuracy. Another team member, Berkeley research scientist Dr. Anthony Ambrose, is getting even more specific: Using a sub-millimeter drill bit and computer analysis programs, he's able to examine the isotopic makeup of the wood within each annual ring. "For example fog water has a particular isotopic signature," he said, holding up one of the thin redwood cores. By studying those isotope signatures, he can see not only whether the summer of 1959 was a particularly wet one (or dry, or hot); he can even tell how the tree responded to that stimuli. "It's a tremendous goldmine of information that we can unlock from these tree rings," Ambrose said.

Other facets of the study include solar-powered, wireless sensors that record micro-environmental conditions in the treetops, probes that measure water movement within the trees' sapwood and, perhaps most importantly, seedling experiments that simulate possible future environmental conditions by manipulating the levels of carbon dioxide, water, light and humidity. Most climate scientists aren't so concerned about sturdy, ancient giants like those in Rockefeller Forest, Dawson said. "But many people are really concerned about whether we're going to have forests here in the future, and you'll never understand that unless you understand what the seedlings are doing. They are the future forest."

This month the team will wrap up its first year of the three-year study. The scientists are hopeful that the information they collect can help inform mitigation strategies for the trees and, by adding to our understanding of climate change, perhaps influence public policy as well. For more information on the project, visit www.savetheredwoods.org.