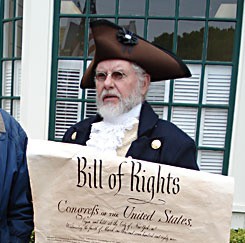 The most immediately noticeable difference between the liberal dissidents of the Bush years and conservative protesters like the Humboldt TEA Party Patriots is their outfits: Liberals -- who knew what they'd wear? Tie-dyed Mumia T-shirts? Nappy hemp ponchos? Maybe a drowsy baby in a Jamaican flag papoose? Conservatives, on the other hand, are coordinated: For them, nothing will do but the red, white and blue.

Bill Kohse of McKinelyville went ever further, dressing himself in full colonial-era garb -- tricorn hat, frilly cravat, breeches -- and carrying an oversized Bill of Rights. The goal, Kohse said, was "to stop this so-called medical bill that [Democrats] are pushing through that will basically end everybody's rights and privileges."

While that may be overstating things a bit, H.R. 3200, dubbed "America's Affordable Health Choices Act of 2009," does threaten a fundamental tenet of old-school conservativism by seeking to expand the role of the federal government in our health care system. The proposed "public option" for health insurance is, in GOP circles, widely viewed as a governmental power grab. "If anybody has private insurance now, the time that they have to stay on [it] is limited because you have a government agency playing the game and making the rules," said Ferndale resident and Humboldt TEA Party organizer Dorice Miranda.

TEA Parties, for those unfamiliar, are nationwide anti-taxation rallies -- the "TEA" serving as both an acronym (Taxed Enough Already) and a reference to the Boston Tea Party. These would-be revolutionaries previously marched on Tax Day ("A Measure of Tea," April 23) and the Fourth of July. Friday's rally in Eureka was part of a coordinated national protest at the offices of U.S. senators and congress members.

If the local ranks had diminished somewhat this time around, their fear and outrage clearly had not. One sign warned, "Your freedom is at risk." An older gentleman, referring to the federal government, said, "They want to mandate what we're eating and drinking." Everywhere, the specter of Marxism loomed. "Democrats believe in promoting socialism and giving free things to everybody," Glaser declared. "We don't want socialized medicine," agreed Margaret Stafford of Eureka. "Wake up or Obama becomes America's Chavez," warned one sign. (Hugo, one assumes, not César.)

Miranda predicted that the health care reform bill could forever alter our country's fundamental structures. "The biggest thing we've ever faced in our lifetime, probably, is this health care reform," she said. "We don't need to do it in two or three weeks."

Most everyone agreed -- and with good cause -- that some type of reform is needed. U.S. health care spending in 2007 (the most recent stats available) topped $2.4 trillion, or $7,900 per person, according to the nonpartisan National Coalition on Health Care. At 17 percent of the country's gross domestic product, that's more than quadruple the amount spent on national defense. And those costs are rising at more than twice the rate of inflation.

Yet even with the most expensive health care system in the world, significant problems persist. For example, our rate of preventable deaths -- that is, those that could have been avoided with timely and effective care -- is 33 percent worse than that of the best country. Our life expectancy is nearly a year below the average in the Organization for Economic Cooperation and Development (OEDC), a multinational nonprofit that includes 30 countries, from Canada to Mexico, Germany, Switzerland and France. These sobering stats may or may not be related to the nearly 46 million Americans -- 18 percent of the population under the age of 65 -- that had no health insurance in 2007.

So who has a better idea? Miranda suggested a system similar to car insurance, wherein individuals would be responsible for choosing their own coverage, with minimal governmental assistance. Kohse, the man in full revolutionary costume, suggested loosening restrictions on medical research. Stafford said the bottom line is this: "I just think that the government does a lousy job of managing things."

Such mistrust crosses party lines. And if there's one thing that hasn't changed with the latest ideological swap-out of marching malcontents it's the abiding tendency to minimize some problems while exaggerating others -- to cast one's own positions as heroic and the opposition's as wicked.

"Everyone can complain and find problems about everything," said Renee Taylor, who was protesting with her husband Richard. "That is humanity. So you can just keep making a mountain out of a molehill, or you can really look at hard, cold reality and recognize that what we have is damned good. Damned good. It's worth fighting for, and that's why we're here today, because we feel very deeply that what is coming at us is evil."

*View video from the protest here.*