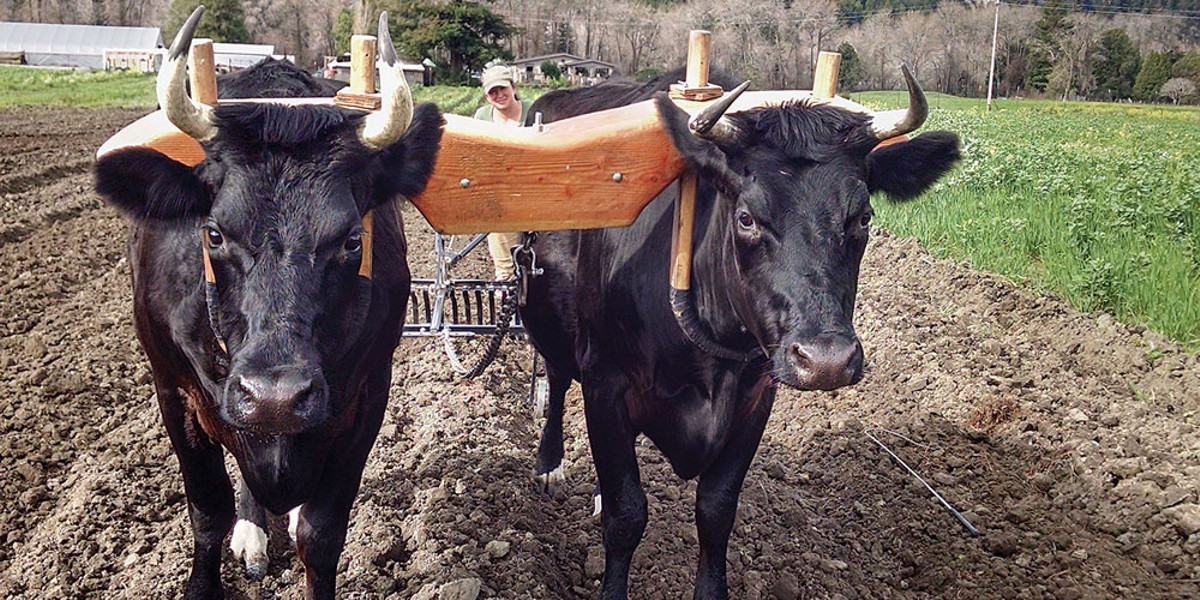 Photo courtesy of Kevin Cunningham Melanie Cunningham follows Joseph and Tex as they drag the All-In-One. 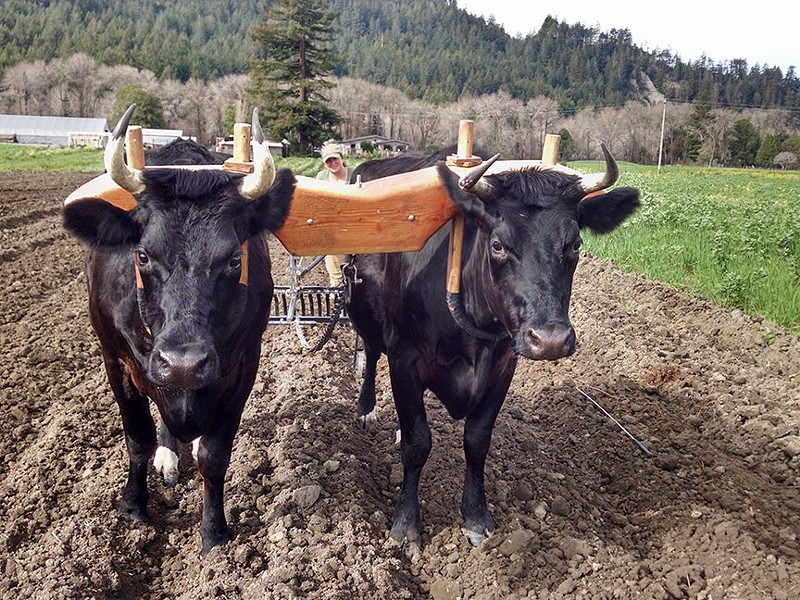 Photo by Kevin Cunningham Melanie Cunningham follows Joseph and Tex as they drag the All-In-One.

Since 2009, Kevin and Melanie Cunningham of Shakefork Community Farm have been farming on 85 acres in the Van Duzen River floodplain in sunny Carlotta. They cultivate 8 acres of mixed vegetables (from salad greens to brassicas to root vegetables), storage crops and small grains, and manage another 40 acres of grazing land for pastured poultry, sheep and cattle.

Five years ago, Kevin traded four broiler chickens for four mixed Holstein/Jersey bull calves — he likes to say that he turned chickens into oxen — consulted his copy of Oxen, A Teamster Guide by Drew Conroy and started on the path of team training. It also took him time, of course, and steady effort.

While the word "teamster" today typically refers to a truck driver, originally it meant a person who drove a team of draft animals, usually a wagon drawn by oxen, horses or mules. The use of draft animals in a farm these days is rare in the West, but thanks to the Internet and the Draft Animal Power Net website (www.draftanimalpower.org), Kevin is in contact with other draft animals practitioners around the country. Last year he attended the Draft Animal Power Field Days conference in Massachusetts.

In their first year, oxen Joseph and Tex, named for the white Texas-shaped spot on his side, learned basic commands and how to pull a small load. At 2 and 3 years of age, they started helping with daily chores, like hauling chicken feed, water and hay. Oxen are considered mature and able to do a full load of work at 4, and in their prime up to about 8. After that, they start to slow down, though they're still able to do some work on the farm.

Besides oxen (the use of which for transportation and then agriculture dates back to 4000 B.C.), horses are also used as draft animals and have a longer work life. But horses take longer to train and would have been more expensive to purchase and to maintain for the Cunninghams, as they require feed not available on the farm. In the end, the ability to be self-sustaining and feed the draft animals from the pasture won out.

Watching Kevin walk alongside Joseph and Tex in a field is like finding oneself in a pastoral painting from the past come to life. That remarkable relationship between human and animal elicits respectful silence.

Shakefork Community Farm uses uncertified organic and biodynamic production methods, meaning it treats soil fertility, plant growth and livestock care as interrelated tasks. The oxen are a source of solar-powered traction, as they consume grass and convert it into muscle power. Together with the other livestock, they also provide manure to the compost pile, contributing to make the farm independently fertile.

Shakefork Community Farm is a mixed-power farm. The tractor is used to do the primary tillage of a field, while the oxen do finer-grained work such as secondary tillage. The oxen can walk on a wet field earlier than the tractor. In recent dry years, this was not much of an asset, but this year it came handy for some early spring planting. The oxen also help with other tasks, like pulling salvaged lumber that drifts down the Van Duzen River and hauling loads around the farm.

It's working out well enough that two years ago the Cunninghams brought in another pair, milking shorthorns named Duke and Earl, which are in training.

Using the oxen team has required some changes, like in the placement of the beds. Two years ago, the Cunninghams launched a successful crowd-funding campaign through Fund Humboldt that allowed them to purchase a tilling implement called an Anny's All-In-One, made in Mendocino County. The All-In-One, which is tied to the team, includes attachments for various types of farm work, such as shaping beds, cultivation, hilling and digging potatoes.

To give an idea of the improved efficiency Joseph and Tex recently pulled the All-In-One to weed a little more than a 1/3 of an acre of brassicas in 20 minutes. It would have taken a team of three to four people an entire afternoon to do the same work with a hula hoe weeder. A second pass took out even more weeds.

So when you pick up greens from the Shakefork Community Farm's stall at the farmers markets in Arcata, Fortuna or Garberville, or receive your CSA share, that's some oxen-powered produce. If you're curious, visit the farm (7914 State Route 36, Carlotta) on Sunday, May 15 from 2 to 4 pm and the Cunninghams will take you on a tour.