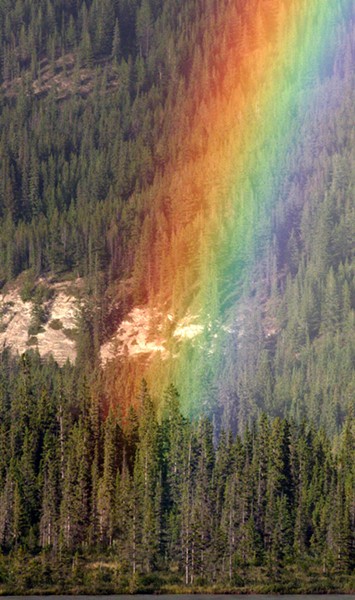 In 1671, in a fit of reductionism, Isaac Newton famously split light from the sun with a prism and announced that white light was composed of seven colors. You probably memorized them as ROYGBIV when you were at school, although most of us can't readily pick out the "I" (as in Indigo), distinguishing only Red, Orange, Yellow, Green, Blue and Violet in a spectrum. How many distinct colors can you see in a prism or rainbow spectrum? Six? Seven? Eleven?

Asking, "How many colors can you see?" is a bit of a trick question, because we're affected by our native language. Researchers reviewed terms for color in about 20 languages from several language families. They found that humans distinguish by name as few as two basic color categories (black and white) and as many as 11. A "basic category" means that it's not included in any other color term (e.g. crimson is a type of red, so doesn't count as "basic") and is generic ("blonde" is normally restricted to hair and wood; "gold" and "silver" aren't basic, being the names of objects having that color).

All languages studied have terms for black and white, and if they have a third term, it's invariably red. A fourth term is either green or yellow. A language containing five color terms contains all the previous ones: black, white, red, green and yellow. A sixth term is always blue, and a seventh always brown. After that, purple, pink, orange and gray come into play. The universality of these findings is both surprising, given the vast range of human environment and everyday experience, and expected, because of our common evolutionary heritage.

Suppose, instead of asking how many colors can you name, the question was, how many can you distinguish? One hundred? One thousand? Try 10 million! That astonishing number results from the supersensitivity of retinal cells to light. Our retinas contain three types of color receptor cells, or cones: "S" cones are most responsive to violet at a wavelength of 420 nanometers; "L" cones, most responsive to yellow-green (564 nm); and "M" cones, most responsive to green (543 nm). Our eyes reduce any color of light into one of 10 million discernable combinations from the response of these three kinds of cones.

And then, in the greatest magic trick of all, our brains use the information from those cells to create the sensation of color. That phenomenon -- turning electrical activity in the brain into subjective experience -- is what psychologists rather modestly call "The Hard Problem of Consciousness." Or, in the words of Isaac Newton, "To determine by what modes or actions light produceth in our minds the phantasm of colour is not so easie."