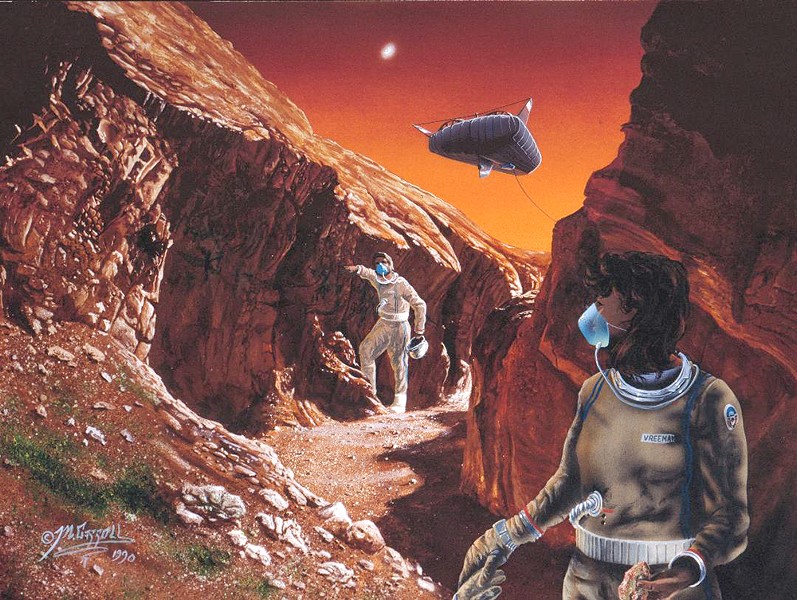 Courtesy of the artist Artist/author Michael Carroll imagines how Martian explorers might venture out once the atmosphere is thick and warm enough for them to doff their pressure suits. The carbon dioxide atmosphere would require rebreathers that absorb the CO2 in exhaled breath, allowing the unused oxygen to be recirculated. Backpacks containing additional oxygen would permit hours-long outside activities. The lighter-than-air vehicle is based on a design by Mitchell Clapp.

Say the word quickly and it doesn't sound that difficult. We know how to warm Earth (unfortunately) so it shouldn't take much to warm much smaller Mars. After that, it's just a hop, skip and jump to create a breathable atmosphere, and there we have it, Earth Two. A second chance to get it right — or, more cynically, screw it up again. OK, it's a little more complicated than that. Let's look at some of the challenges.

We know that Mars has the necessary key ingredients to create an Earth-like biosphere: carbon dioxide, nitrogen and (especially in high latitudes) water. However, terraforming means different things to different people. For some — call it "terraforming-lite" — it means warming the planet from its present stable climate [average surface temperature -60 C (-76 F), thin atmosphere, thick polar caps] to a second, more temperate "setpoint" [average temperature 15 C (59 F), thick atmosphere, thin polar caps]. Given those more clement conditions, water will flow, hardy plants can thrive and humans will be able to survive on the surface without pressure suits, albeit with oxygen rebreathers (see illustration). "Full terraforming," on the other hand, is achieved when the atmosphere is rich in oxygen (>13 percent at 3 psi partial pressure) and low in carbon dioxide (<1 percent), so that humans and animals can breathe unassisted. Currently, Mars' thin atmosphere contains 95 percent CO2 and about 0.1 percent oxygen. These two basic stages of terraforming shouldn't be confused: One's short term and technological, the other is long-term and biological.

Terraforming-lite: By setting up solar-powered factories to synthesize so-called "perfluorinated" gases and pump them into the thin Martian atmosphere, we should be able to achieve terraforming-lite in a century. These gases are highly efficient greenhouse gases. That is, they snare the solar flux falling on a planet, trapping sunlight energy and thus warming the surface. Perfluorite compounds are our best bet for such gases, since all the necessary ingredients are present on Mars. (Our Curiosity rover recently detected fluorine.) Besides being super-efficient greenhouse gases, they're nontoxic, don't affect the ozone layer and are resistant to degradation by the sun's UV radiation.

Once we've raised the temperature of Mars by just a few degrees, the warming process will be self-sustaining, a runaway greenhouse effect. That's because warming will release frozen carbon dioxide — another greenhouse gas — from the polar caps and from vast deposits we believe, somewhat optimistically, lie just beneath the surface.

Full terraforming: Once water starts flowing, oceans will fill, rain will fall and — key to the next step — we can introduce plants from Earth which convert soil nitrates and perchlorates into nitrogen and oxygen gas: the magic of photosynthesis. On Earth, when you factor in oceans, deserts and other non-vegetated areas, average photosynthesis is a pretty inefficient process, around 0.01 percent. Using that figure for Mars, full terraforming would take maybe 100,000 years. The trick, then, is to maximize opportunities for photosynthesis by seeding plants everywhere they can possibly grow. A leaf has a photosynthetic efficiency of about 5 percent (although genetic engineering will no doubt improve on that), so an optimally vegetated Mars could produce a breathable atmosphere in around 1,000 years. (Compare that with the hundreds of millions of years it took to photosynthesize a breathable atmosphere on Earth.)

Next week, I'll discuss the ramifications of terraforming and some potential deal-breakers.

Barry Evans (barryevans9@yahoo.com) is cautiously optimistic that our ventures to Mars will be longer-term than the "flags and footprints" moon missions.