Last week, we looked at the difference between "terraforming-lite," warming Mars to the point where it has a thick carbon dioxide atmosphere and liquid water oceans, and "full terraforming," where it has an atmosphere with sufficient oxygen (and minimal CO2) that humans and animals can breathe.

Because we can do a whole lot on Mars well before we've achieved a breathable atmosphere, neither 1,000 years nor 100,000 years will be a deal-breaker for those of us who dream of human colonization. A thick CO2 atmosphere will shield humans from the most harmful radiation, liquid water will allow crop cultivation (in greenhouses until it gets warm enough) and, free from bulky pressure suits, explorers will be able to move around easily and naturally in Mars' 38 percent Earth-gravity.

I've made this sound far too easy, of course, the Elon Musk "C'mon guys, how hard can it be?" approach. It's going to be incredibly tough, perhaps impossible, to colonize the planet successfully. (Even landing there is a major challenge: We have a 40 percent success rate at this point.) Carbon dioxide may be more of a problem than I've breezily said. For instance, if the south polar cap doesn't contain as much CO2 as we hope, we're going to have to rely on abundant carbon dioxide as permafrost near the surface. And if that doesn't pan out, we'll have to extract it from carbonate rocks, a much tougher proposition.

Also, the low gravity will make it virtually impossible for humans to return to Earth after a long sojourn. (I'm a fan of one-way missions — like life.) A thousand potential challenges and problems loom, some obvious, like radiation, fresh food, medical emergencies, loneliness and stir-craziness. Others we can't possibly predict before they arise. 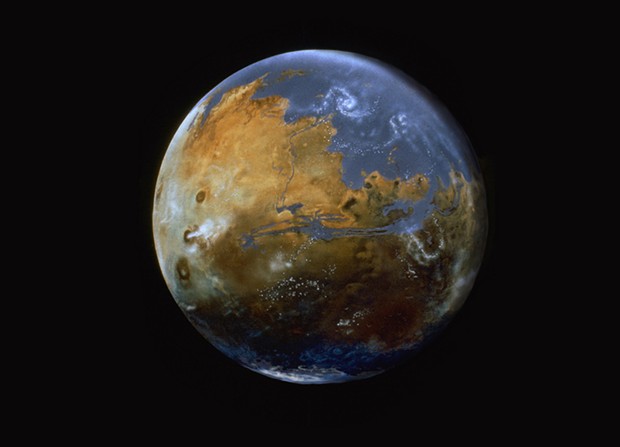 And — the biggest wild card — what happens if we find living organisms on Mars when we recover cores from a few feet below the surface? Most planetary scientists and exobiologists assume that, if there ever was once life on Mars, it's long extinct. But suppose we do find life and determine it's not "ours," that is, derived from a common ancestor (see "Looking for Aliens," March 1, 2019). We'd have to think long and hard about making Mars habitable for humans if, in doing so, we'd kill off whatever life is there now. (Although given our kind's historical approach to colonization, the "leave the hell alone" option may not be likely.)

Meanwhile, with some decent luck and not finding "second genesis" life there, the challenge posed by Mars is intriguing, if for no other reason than to help soften our differences here on Earth. Terraforming and colonizing the planet isn't something that could be undertaken by a single nation — it's going to take an unprecented international effort. If ever a project was worth combining the skills and innovation of all the nations of the world in a cooperative venture, going to Mars "in perfect harmony" is it.