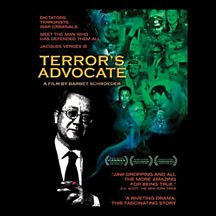 Terror's Advocate opens with a bucolic scene of the Cambodian countryside, followed by patient shots of a pastel-colored temple amidst the trees and carefree monks strolling barefoot down a dirt path.

Cue the soft, tired voice of Pol Pot, the notorious leader of the Khmer Rouge, responsible for the death of some 1.5 million Cambodians. He is recalling his long-time friend, and the subject of the film, French lawyer Jacques Vergès. Vergès, Pol Pot says, once described him as someone "polite, discreet and smiling." It doesn't take us long to realize that Vergès was never one to judge a book by its cover — or a dictator by his killing fields, for that matter.

And so it is that we are thrown headlong into an Alice in Wonderland-like rabbit hole that is the irreverent, mysterious, and always-quirky life of Vergès, famous for having defended clients others refused to represent: Nazi war criminals, Palestinian airline hijackers, Algerian freedom fighters. Barbet Schroeder's film — which spans half a century, and bounces between an archipelago of different characters, all related in some way to Verges and his wanderings, physical, intellectual and amorous — is at times hard to follow, especially if you've never seen The Battle of Algiers, or can't recall pre-9/11 acts of global terrorism with encyclopedic clarity.

Still, even though the film doesn't try very hard situate the neophyte viewer within a historical context, it functions on a higher level as a kind of ethical yoga, forcing the viewer into often uncomfortable moral positions. In Algeria and in Palestine, we are asked to reexamine the difference between terrorism and liberation struggles, between cold-blooded murderers and freedom fighters. The film provides no easy answers, and Vergès, to the director's credit, comes across neither as a monster nor a saint.

Most of the time he just exudes arrogance. A fat cigar often pinched between his fingers, he talks into the camera from behind his solid-wood desk in a dark Old World-style office. Though he has defended revolutionaries, he seems more than content with the privileges of having ended up in the establishment.

The film's greatest strength — its ability to talk about and around Vergès without judging his actions — is also its major flaw. The story's lack of a thesis causes it to fray at the edges. The only real structure the film has is that it's loosely chronological. It begins where Vergès' career did, at a green 30 years of age defending anti-French Algerian guerrilla Djamila Bouhired, who he later married.

Along its meandering path, it dives into side stories, like trying to figure out where Vergès disappeared to in the 1970s, and whether or not he was criminally involved with a former client, the terrorist Carlos the Jackal. Vergès also defended Carlos' girlfriend Magdalena Kopps, who he was involved with sexually after she was released from prison. He may have even corroborated in an earlier plan to spring Kopps from jail, but we'll never know. Vergès' lips are sealed, capped with a sly little smile.

What is most fascinating about Vergès' life is that this son of a French diplomat and a Vietnamese mother used his clients as a way of putting France on trial, or so the film asserts. It was only inside the halls of justice that Vergès, a David-like character, could take on the French colonialist Goliath. Ultimately, it was his intimate knowledge of what it meant to be an outsider in French society that was both his greatest weapon and his Achilles heel.