Midlake, plus Cham, Triple Junction and The Lowdown 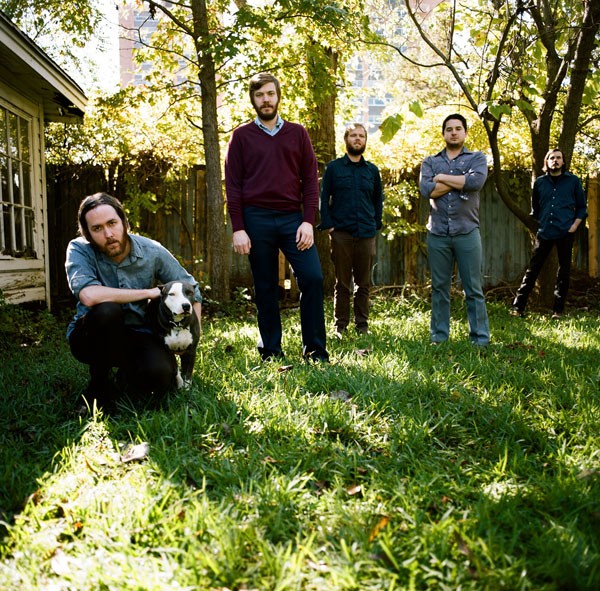 We caught up with Midlake guitarist Eric Pulido at his home in Denton, Texas before he left on tour. Everyone in the band is from somewhere else in Texas; most came to Denton to study at Univ. of North Texas, a college known for its music program. In many ways Denton sounds like Arcata, although it's much bigger -- around 120,000 live there.

"I fell in love with the town," said Pulido, "how cool it was artistically and with the music scene. There are two colleges, so Denton's main industry is education. And there's a really cool historic downtown square with the courthouse in the middle and a lot of mom and pop shops around the square. The old theater has become an arts center."

Midlake has evolved since Pulido joined nine years ago. At first lead singer Tim Smith played saxophone. "But," said Pulido, "he heard Radiohead's OK Computer and all these other bands and started getting into rock. He said, 'I want to do that,' and switched to guitar."

Journalists picked up on the Radiohead association. Then, when flute solos were added, Jethro Tull comparisons became de rigueur. Both are off-base to my ears. Sonically Midlake draws more from early ’70s British folk-rock bands like Fairport Convention and Steeleye Span, especially on their haunting new album, The Courage of Others.

This week Midlake begins a major tour; their first in some time. "We took two years after we finished our second record, The Trials Of Van Occupanther," said Pulido. "We didn't play one show during that time, which is quite odd. It was just we didn't have anything to say live until we finished the record. We wanted to have something new to offer before we just went out playing shows for the sake of playing." See what's new when Midlake hits HSU's Depot Friday night along with another Denton band, Matthew and the Arrogant Sea.

When queer activists and local club owners met last week at Aunty Mo's to discuss "murder music" (see "Irie vs. Irate" elsewhere in this issue), the info packet included a list of 11 reggae artists "with hate issues" and another 14 "that have no hateful issues." But, as one club owner noted, what about dancehall musicians who are on neither list? Nocturnum owner Gil Miracle figures he'll have to vet them himself.

That's what he did when he booked Damian Beckett, aka Cham (formerly known as Baby Cham). "I read the lyrics to his songs," said Miracle, "and he's not violent at all. He may not be as open-minded as I am [on gay issues] or the way the community might be, but a lot of people love his music -- and that does not make them bigots either."

While Cham is not on the Queer Humboldt hater list, he has been the target of prior protests. The Stop Murder Music (Canada) Campaign successfully canceled a 2007 show in Ontario where Cham was on a bill with Capleton and Beenie Man (both on the hate list). The Canadian activists' problem with Cham seemed to stem from a track where Bounty Killer guested with a hateful spiel on (Baby) Cham's debut album, Wow the Story. Cham followed that 2000 disc with Ghetto Story, a 2006 release on Atlantic with tales of life growing up on the mean streets of Kingston and no mention of gays. The record also shifted guest appearances to mainstream American R&B stars including Rihanna and Alicia Keys. Cham's NorCal tour brings him to Nocturnum Saturday night with Ras SoulJah, Sacto hip hop singer Feyvva and local DJ Selecta Prime.

More reggae? Rootsy singer/actress Sister Carol, aka "Mother Culture," plays at the Jambalaya with backing by Yellow Wall Dub Squad on Friday, which also happens to be International Women's Day. Then Sunday at the Red Fox it's "niceness" from Pato Banton with State Of Jefferson Band and Rude Lion Sound. You also have local reggae crew Synrgy playing Thursday (March 4) at Six Rivers, and dancehall/hip hop band Juce playing Saturday at Humboldt Brews with The Green Machine.

On Friday HumBrews becomes blues central with an appearance by veteran bluesman/guitar-shredder Guitar Shorty touring behind his new Alligator CD, Bare Knuckle. If you've heard this guy, you know he's the real deal.

On the heavy side you have The Long and Short of It, a self-described "burly band of men from San Diego" working their way up the coast. They play the Alibi Saturday with Dragged by Horses, then at the Lil' Red Lion Sunday with The Hard Ride and Electric Jellyfish.

Also on the hard rock side, Triple Junction, back with a pair of shows: First, Thursday at the Red Fox as musical support for a Jello Wrestling Show, then Saturday at Blue Lake Casino's Wave. I ran into TJ drummer Terry Henkel at Winterfest (an awesome success, BTW), where he played with The Fickle Hillbillies. He's one third of the Triple Junction power trio with Rico Von Rabenau on guitars and (relatively new) bassist Jon Murdock. "All three of us sing lead and backups," says Henkel. "We do a fair amount of late ’60s-’70s hard rock covers -- Zeppelin, Stones, Hendrix, Cream, Sabbath, etc. -- mixed in with soaring blues-based originals. We consider our band as 'keepers of the faith' for hard rock in the North Coast scene."

This being the first Saturday of March, we have Arts Alive! in Eureka. Ramone's in Old Town has an array of post-folk songwriters including John Ludington, Chris Parreira, Colin Begel from Strix Vega and Dean Haakenson from Be Brave Bold Robot, who has a new CD, Take A Deep Breath (plus photos by Maureen Fitzgerald). Meanwhile, Spudgun's at Old Town Coffee.

Speaking of benefits, the Catalyst Service Fund fundraiser Sunday at Mazzotti's is a comedy contest with 10 comedians vying for prizes, and -- drumroll -- "The MCs for the night are the characters from the popular photocomic Seven-O-Heaven." Yes, our own Andrew and Will -- live!

Coming up next Tuesday at Nocturnum, a visit from Deke "The Guitar Geek" Dickerson, a master of retro guitar styles from rockabilly to Western swing. He's on the road with the like-minded Chicago band Joel Paterson and the Modern Sounds, deemed by Deke, "America's best new band. Absolutely killer!"

If you follow this column, you know about Brian Swizlo, founder of the Humboldt Collective, keysman for numerous local bands. Debuting Saturday at the Pisces Birthday Party at the Red Fox, his next project, The Lowdown. "It features Lex (drummer of Vinyl), Blair (drummer we used to play with up here), Greg (guitarist from Bump Foundation), Aaron (bass from Moo-Got-2), Mike (cellist from Berel Alexander Ensemble), Chris Noonan (sax from Moo-Got-2) and myself on keys," says Swiz. The group is prepping for a trip to New Orleans to play during Jazz Fest with DJ Logic on turntables. Swiz notes, "Brad, the manager of the Red Fox, has facilitated a club down there (the Hi Ho Lounge) and together we've opened doors to Humboldt music and anyone wanting to be part of Jazz Fest this year, which is a big step for our music community." Joining the Lowdown at the Red Fox Saturday and in New Orleans: Moo-Got-2 and the Berel Alexander Ensemble. In Louisiana during Jazz Fest, the bands will share bills with the likes of Zepparella and Marco Benevento Trio. If you're heading down, stop by the Hi Ho and say hey.