Reggae at the Mateel, a touch of rock and a Hendrix reverie 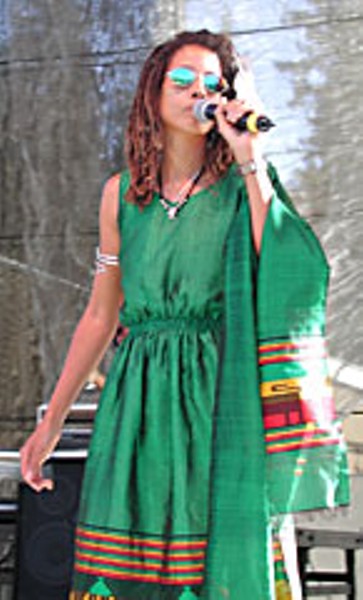 Tchiya Amet at Reggae on the River 2001. Photo by Bob Doran

Hey, thanks for picking the paper up on this Thanksgiving weekend, and happy Thanksgiving to you, our readers. Without you — well, I'd probably still be slaving over a hot stove and carving turkey at some local eatery.

As you might guess, the Thanksgiving holiday tends to put a crimp in the local entertainment scene. A fair number of clubs and cafés are closing up shop for the weekend so everyone can feast on the big bird and watch football, and/or eat tofurky and take a healthy walk in the woods, or maybe just hang with the family. But there is still a little bit of action on the music front.

The Mateel has a show Friday night, the day after turkey day, something they're calling Give Thanks: A NorCal Reggae Showcase. The "thanks" is partly because the show takes place the day after Thanksgiving, but it's also a request aimed at those who want to see the Mateel survive the hard times it's going through.

On Tuesday of this week, after the Journal went to press, the Mateel Community Center held its annual membership meeting. You might remember last year's annual, a seriously contentious affair that sent shockwaves through the SoHum community and set in motion aftershocks that are rolling to this day. (See "SoHum in Counseling," Nov. 23, 2006, and reggaeblog.wordpress.com.) The courts are working on divining the meaning of things that were said that night at the Mateel. Without going into detail, we'll say that fateful meeting marked the beginning of the end to the long, complicated relationship between the Mateel and Carol Bruno of People Productions.

As indicated on the Mateel website, the agenda for Tuesday's meeting included "a 2006 financial report and current state of the organization summary, hall and event review for '06/'07, and a board of directors' report..."

It was an eventful year for the Mateel, not a particularly good year. The reports likely made for an interesting meeting. An educated guess on the financial report says the nonprofit is pretty much broke. After decades of dependence on cash generated by Reggae on the River for operating funds, the river has run dry. Forgive me if I skip the details as to how and why this happened. It's an extremely complicated story and whatever I say would undoubtedly piss someone off.

Let's just say the Mateel needs money. Thus the need for a series of successful fundraisers, the Friday show among them. As laid out by Justin Crellin, currently the Mateel's sole paid staff member (although he says he hasn't even been paying himself), the organization's year-end plan is ambitious. They say they'd like to pull together $75,000 by the end of December, which, says Justin, should be enough to put a "sustainable staffing model in place," funding four positions (plus an accountant) with enough left to provide seed money for events in 2008 like the Summer Arts Fest. The Winter Arts Fair is coming up and that should bring in a few bucks, but Justin is banking on the generosity of SoHum reggae fans out in the hills, hoping they'll come down and come through Friday and use the sliding scale admission to make some sizable donations.

So, what is this NorCal reggae showcase? It's a collection of Cali bands: Creation, aka Creation Reggae Music Show Band, is up from the S.F. Bay Area with some authentic Virgin Islands/Jamaican-style roots. Tchiya Amet and The Lighthouse Band come from Mendo. You might have heard Tchiya if you went to Reggae in 2001. I met her backstage and learned a bit about her. She came to reggae by a different path from most, grew up in urban Chicago, blues country, but took a different direction when she discovered her Native American roots and reggae music. Lately she's been pursuing the New Age (yet ancient) practice of acutonics, an Egyptian healing arts akin to acupuncture that involves applying tuning forks to pressure points. Me, I'm wondering about the healing power of a gut-rocking reggae bassline.

Last but not least you have Stevie Culture backed by Massawa, a Humboldt/Jamaican hybrid band with members from the hills around Whitethorn and the hills around Kingston. Massawa played Reggae on the River a few times and has worked with a number of well-known Jamaican artists. Dancehall vocalist Stevie Culture comes from a JA-band called S.A.N.E. (Sounds Against Negative Expression), and from that name and his you can tell he's pretty much on the positive, roots-and-culture side of things.

The reporter in me can't help pointing out that booking Massawa for this gig makes a statement of a sort. Hoy Kersh of Massawa has been one of the more vocal critics of People Productions—she's been stirring the pot since the conflict started. Try a Google search for her name and the top hit will be my "Clash Over Reggae" Journal story from a year ago. So don't expect the Give Thanks show to be a healing exercise bridging the ongoing rift. Did I mention that it starts off with a Jamaican-style Ital dinner? Classic.

As noted above, the weekend action is pretty slow with a few notable exceptions. Do our local casinos ever close? They're on their normal karaoke/rock schedule. Norm from Bad Kitty had planned something he called a "post-turkey psychobilly blow-out" at the Vista, but he pulled the plug last minute. (If the meager crowd I found there for the seriously rockin' RTX show was an indication of what's going on on the waterfront, he probably made a wise choice.)

The Alibi has the usual heaviness: Saturday it's two local bands, instru-metal from 33 1/3, and EKA punk from The Baby Arms. Sunday it's an import, Monotronix, a garage rock band fromTel Aviv with a wild front man, paired with Arcata acid punks Nipplepotamus.

Tuesday, Nov. 27, marks what would have been Jimi Hendrix's 65th birthday, had he not died, too young, at the age of 27. The Red Fox Tavern is celebrating with a Jimi Hendrix Birthday Bash featuring who else but Humboldt's finest Hendrix channeler, Jimi Jeff and the Gypsy Band. Jimi's working hard this weekend, playing Friday at Cecil's with Soldiers of Shangri-La and Saturday with the Gypsy Band at Six Rivers. (The Soldiers typically play Six Rivers every Thursday, but understandably the place is closed this week.)

Forgive me if I wax nostalgic, but thinking of the late great Mr. Hendrix takes me back to the Summer of Love. If you know your rock history, you'll remember that Jimi had moved over to England in 1966, where he met all the happenin' players in the blues rock scene — Clapton, the Stones, the Beatles and a former Animal, Chris Chandler, who became his manager and helped Jimi assemble a little trio he called the Jimi Hendrix Experience. They recorded a few songs. A cover of "Hey Joe" was Chandler's choice, then there was Jimi's own "Purple Haze," which I first heard in spring of '67 on San Francisco's original underground radio station, KMPX. What a revelation.

I was talking in class with a girl I knew, Charise (who, by chance, now lives in Eureka). She asked what the song was all about. This was eons before the age of the instant MP3 download, and they didn't have the 45 at my local record store, so I taped it from the radio with my reel-to-reel machine and transcribed the lyrics. Another revelation.

Then summer came, that infamous Summer of Love. The Fillmore Auditorium, across the bay from where I lived, opened up its summer concert series with a show featuring Jefferson Airplane, jazz guitarist Gabor Szabo and, as the opening act, the Jimi Hendrix Experience.

It was the weekend following Monterey Pop, where Jimi basically ruled (and I missed it). No way I'd miss this one. We piled into my friend Jim's VW bug and crossed over to the City, paid our $3 admission and saw the best rock 'n' roll show ever. There was a slight hitch — the Airplane's vocalist, Grace Slick, had a sore throat or something, and the band did not play. A replacement was enlisted: Big Brother and the Holding Company.

As per the billing, Jimi opened, and shredded. The buzz in the room after his first set obliterated Gabor's solo acoustic jazz. Then Janis Joplin came on at full tilt, swilling Southern Comfort onstage, screaming and belting out the blues, but everyone was waiting for Jimi to return for a second set. That second set was perhaps impossible to top, ever. After building to a wailing wall of feedback, he sacrificed his guitar to the gods of rock, setting it aflame amid electric incantations and in a moment of revelation, my 16-year-old mind was blown.

Forgive me if you've heard that story before. I've told it more than once. I relay it again because this is our Thanksgiving edition, and I'm thankful for the experience. While we're giving thanks, I'll send out a thank you to the musicians who open up their hearts to bring us transcendent moments where the day-to-day world slips away and doors open up to places we've never seen. Thanks for the music.