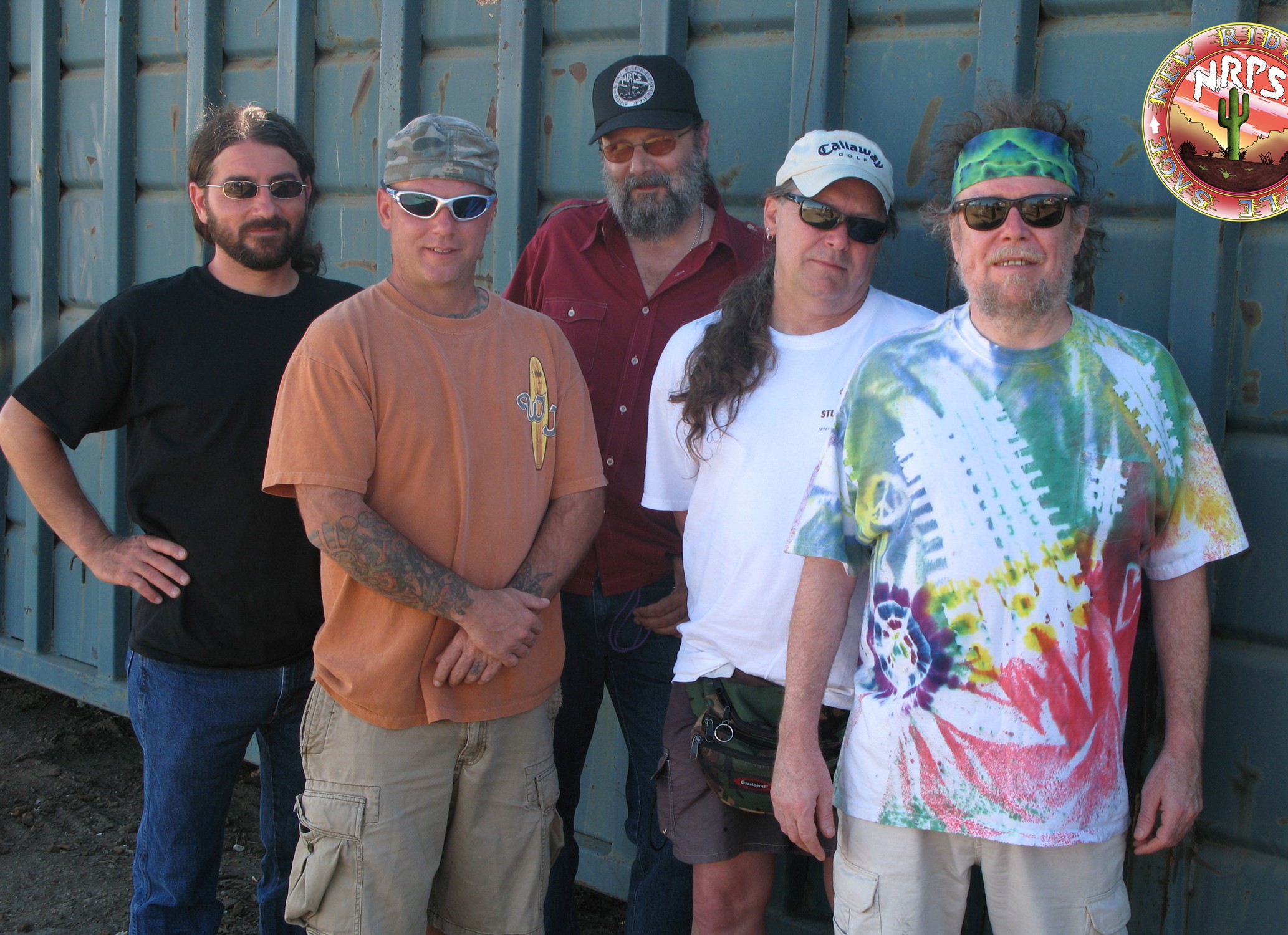 Our family usually went to my uncle's house for Thanksgiving. Bottles of Michelob (signifying a special occasion), soda in glasses and bowls of salty snacks lay on the coffee table. Family members played poker; they'd allow me to join in "to teach me a lesson." And coming from a Japanese-American family, we had a long table of food -- from the squares of Jell-o on leaves of lettuce to sushi and Chinese chicken salad to the traditional turkey and stuffing. When I was 13 years old, while the rest of my family was watching an episode of The Waltons on television, I leafed through my older cousin's record albums -- Santana's Abraxas, J. Geils Band's Full House, Paul McCartney's Red Rose Speedway, among others -- and books on the shelf. I pulled out a worn paperback copy of The Electric Kool-Aid Acid Test by Tom Wolfe. "What's this about?" I asked my eldest cousin, who was working towards a degree in pharmacy. He just looked at me and chuckled.

Originally a Jerry Garcia/Grateful Dead offshoot "country" project, The New Riders of the Purple Sage derived their name from an old country swing band, Foy Willing and The Riders of the Purple Sage. The latest incarnation of the "New" band parks the wagons at Humboldt Brews on Sunday, Nov. 28. Since their reformation in 2005, The New Riders, led by founding member/guitarist/vocalist David Nelson and another early member, pedal steel player Buddy Cage (who replaced Garcia), have reinvigorated the band, leaning more towards Bakersfield country twang while bolstering their country-rock arrangements, releasing an impressive country-rock jam album in 2009 with Where I Come From, which features their current line-up, including guitarist Michael Falzarano, bassist Ronnie Penque and drummer Johnny Markowski -- all of whom have spent considerable time playing with SF and Dead-related bands and musicians. For the recent recording, Nelson collaborated with lyricist Robert Hunter on the majority of the songs. Expect an "alt. country" experience before there was an "alt."

Three rockabilly/country/honky tonk bands turn up the heat (and help burn off some of the calories) at Nocturnum on Saturday, Nov. 27. Reno's Hellbound Glory, whose searing electric honky tonk set at Missing Link Records' first annual Jefferson State Old Time Revue festival this past summer was cut criminally short due to a power failure, will be returning, along with Chico's The Cheatin' Hearts (they've also played a ripping hillbilly set here over the summer) and J.B. Beverley and The Wayward Drifters, a country outfit from Virginia who have drawn comparisons to Hank III and Wayne Hancock. (Beverley used to tour with Wayne).

Speaking of Missing Link, owners Matt and Adam will be moving their varied crates of vinyl, CDs and comics to a new location at 1073 H St. in Arcata (formerly the curious antique shop called One Man's Treasure) beginning in early December. They plan on continuing their series of in-store live music performances.

Down south in Phillipsville, the Canadian rockabilly/country swing outfit Petunia and The Vipers will be tearin' it up at The Riverwood Inn Saturday night. Described as "Tom Waits meets Elvis at Woody Guthrie's hobo junction," Petunia (a male singer/songwriter) cut his teeth playing the corners and bars and coffeeshops throughout Canada. His backing band, The Vipers, touts an impressive lineup of formidable Canadian musicians, including guitarist Stephen Nikleva, who played and recorded for Sara McLaughlin, and Ray Condo, among others. You might ask Petunia about how he landed a name like Petunia.

However, if you are looking for a bit more "fire" (and heated controversy), Jamaican dancehall star Capleton brings his controversial "murder music" baggage to the Red Fox Tavern on Saturday. Joining him is Kingston female reggae/dancehall artist and activist Tanya Stephens, who is known for songs calling for peace and understanding -- clearly this is a juxtaposition of yin and yang (or fire and water). Something to keep in mind: "Hate is too great a burden to bear," said Coretta Scott King. "It injures the hater more that it injures the hated."

Two hardcore punk/folksters, Ghostwriter and Smashed Glass, swill and stomp at the Alibi on Saturday. Ghostwriter, a one-man country/punk troubadour from Dalles, Ore., will be stomping the floorboards, while local hooligans Smashed Glass open with their stout-soaked brand of Irish folk. Just don't say "Pogue Mahon" too loud.

And if that isn't enough to shake off the added poundage, maybe some metal is what you need. Two roaring acts -- AoK Suicide Forest, heavy progressive rockers from Maine, and Seattle's one-man death band Labyrinth and The Desert (yeah, I know, it's two names for one bloke) -- kick out heavy jams at the Alibi on Monday, Nov. 29.

Sadly, at the end of the year Accident Gallery in Eureka (at 210 C St. in Old Town) will be closing. Its key members, Matthew Ananda Oliveri and Phyllis Barba, along with its other founding members, provided a great venue for progressive art -- both visual and aural. The space hosted a number of out-of-town bands, such as Scout Niblett and (most recently) The Intelligence, as well as a slew of local bands, including Starving Weirdos, The Monster Women, Eureka Garbage Company, The Brendas and Universalia Jane. More importantly, Accident Gallery provided a performance space for poetry slams and all-ages events, a rare and needed commodity these days.

Oliveri and Barba are moving on to other projects; their hard work has been greatly appreciated by this community. The Works music store is planning to move into the Accident space in February 2011. Works owner Larry Glass says they will continue providing live performances there. That'll be great, but it won't be quite the same. You will be sorely missed, Accident Gallery. Good luck and thank you. (Read more about The Accident Gallery departure in next week's "Art Beat.")

In the late summer of 1974, Memphis singer/songwriter Alex Chilton went into Ardent Studios to record his third album with Big Star. By then, the band had been whittled down to Chilton and drummer Jody Stephens; their bassist, Andy Hummel, had left the band. Their record company's distributor, run by the famous soul label across town, Stax Records, was near bankruptcy. The finished record, 3rd/Sisters Lovers, though fraught with pain, loss and chaos, contained beautiful, haunting gems, such as "Nighttime" and "Stroke It Noel." Chilton, Hummel and the record's producer, the legendary Jim Dickinson, all passed away earlier this year. In a strangely fanatic response to Chilton's death, scores of DJs across the country played Chilton's "Thank You Friends" in tribute. Despite the frustration and fatalism that entered the eccentric songwriters' psyche, he was still able to come up with an elegant (and somewhat ironic) song: "Without my friends I got chaos/ I'm off in a bead of light," sings Chilton. "Without my friends I'd be swept up high/ by the wind, oh, oh, oh..." I often think of this oddly upbeat song, since I usually find myself far from my folks' home during the holidays. And I have been frequently given a welcomed refuge (as an "orphan") under the warm roof and kitchen of close friends during Thanksgiving. So I take this opportunity to say "Thank you" to all of my good-hearted friends, my extended family, for providing me with a sincere definition of what one should be truly thankful for.