Dream big, live small: Why living in vans is taking hold in California 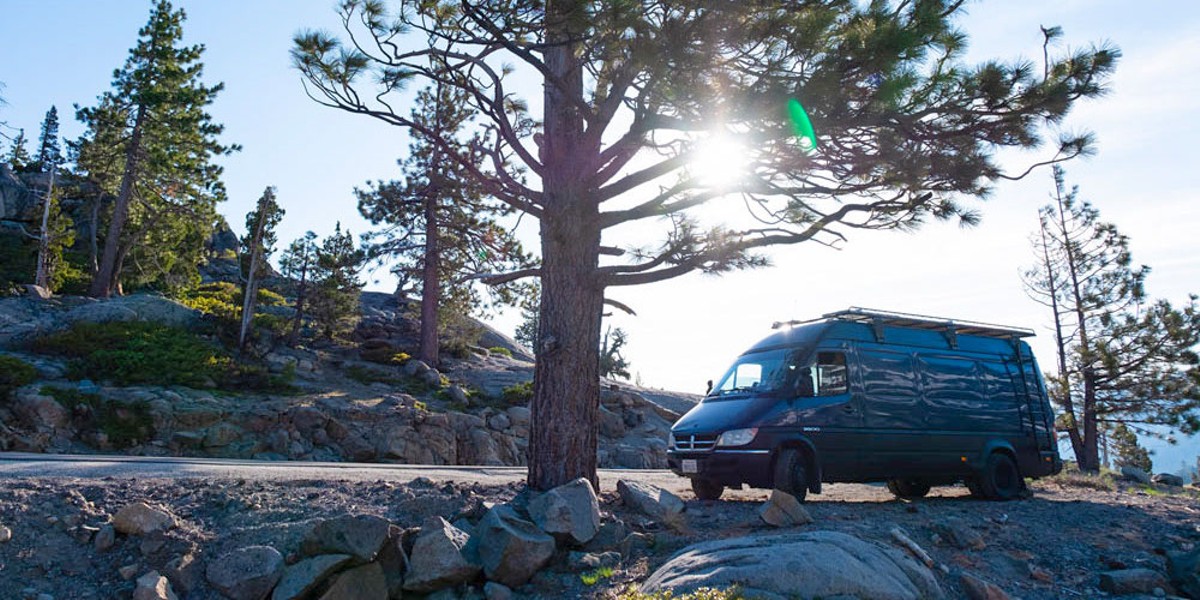 Andrew Nixon/Capital Public Radio Travis Wild with his dog Ayla in their van.

A young man in a black windbreaker perches on the roof of his Dodge Sprinter van, looks out at the sunlit creek, and thinks about getting dinner started.

The 31-year-old, who goes by Travis Wild, has been living out of the van for the last three years, ticking off daily to-do lists in his tiny household between long stretches of road. He's not a trucker or a fugitive, just a new brand of nomad wandering the Golden State under the "van life" banner, seeking a different California dream than the previous generation.

Inside the Sprinter, which Wild has repaneled with glossy pine, he rummages through tucked-away compartments for a bowl, a pot and a strainer. He grabs a metal knife from a magnetic strip on the wall — a space saver in the vehicle's 105-square-foot interior.

His sleeping platform sits a few feet above the bamboo floor, tucked between rows of bolted-in bookshelves that make the van feel like a secret attic. Its back doors open to whatever Wild calls a backyard for the day. Tonight it's a narrow strip of the South Yuba River flanked by smooth gray stones and tall, dry grass.

A growing enclave of millennials is choosing van life as an alternative to a 9-to-5 job and a mortgage.

Now these aren't the van-lifers you're probably accustomed to seeing around Humboldt County, parked around the Arcata Plaza or down near Old Town in beat-up vehicles piled high with possessions. These are young professionals — artists, web developers, accountants — who want the freedom to explore without the pressure of punching time cards and keeping busy social schedules. Their community exists both online and off, with a hashtag that dominates Instagram and roadside meetups across the state.

At the same time, California's housing crisis has forced hundreds of people, particularly in the Bay Area and Los Angeles, to move into their vehicles just to get by. These van-and-car dwellers park on city streets, college campuses and in parking lots in hopes of staying under the radar.

"The two are related, in the sense that, particularly in California, ... homes have become unaffordable," says Morley Winograd, a USC scholar who studies millennials. "The solution is 'I can't find more income, and, therefore, I'm going to cut costs by living a nomadic life'. Or people simply don't have a choice."

Local governments are grappling with the growing number of people sleeping in cars. The city of San Diego just passed a ban on people living in vehicles, and both voluntary campers and homeless individuals are putting up a fight. Other communities — including Santa Barbara, Sonoma and Los Angeles — have instituted sanctuary parking programs, giving folks living in vehicles a safe, legal place to park and stay the night. In Humboldt County, where a recent civil grand jury report estimated "hundreds of people are currently living in their cars," has no designated legal place for them to park. The problem has extended to Humboldt State University, where some students unable to find housing have been living out of their cars on campus lots. A video detailing one student's experience went viral earlier this year, getting 3.6 million views on YouTube.

Part-time van lifer Noel Russell, of Oakland, showed up at a Berkeley City Council meeting recently to contest a ban similar to the one in San Diego. She says it's crucial for people who choose to live a mobile lifestyle to acknowledge the hardship of those doing it out of necessity.

"There's abundant privilege in the ability to choose how you want your life to be," she says.

She and her husband work in the homeless services sector and are thinking of turning their weekend adventure van into a full-time home, because they're fed up with Bay Area rents and prefer to live small. The average monthly rent for a two-bedroom apartment is $3,102 in San Francisco and $1,755 in Los Angeles, according to an ApartmentList analysis of U.S. Census Bureau data.

But Russell says people who become transient after being priced out of their neighborhoods have more important stories to tell.

"Why don't we listen to voices from that community?" she says. "I really think we need to hear from people who aren't taking beautiful pictures out of the backs of their vans."

The mostly 20-and-30-somethings who flock toward van life see it as a double-win—a way to save on rent money while pursuing bucket list experiences.

Most van lifers spend between $100 and $500 a month in gas and less than $30 a month on campsites in addition to other expenses, according to a survey from Outbound Living, a van life news site. Roughly 87 percent work while on the road.

"Remote work has become more available to people," says Kathleen Morton, who wrote a book on the van life movement. "It's an affordable housing option."

Morton also helps organize the handful of van life events that happen across the country each year. She said the first gathering in 2015 had just 60 people. Now, they each draw several hundred attendees.

Van conversion companies are popping up all over California, and the number of Instagram posts tagged with the movement's hashtag has passed 5 million. Sales figures for the Mercedes Sprinter, a popular van life vehicle, continue to rise. In 2018, Sprinter sales topped 29,700 vehicles, an increase of more than 2,100 from the previous year.

Warm weather, abundant outdoor recreation and lots of public land make the Golden State a hotspot for the movement. So does the strong base of people already doing it.

"A lot of these people are looking for community, because life on the road can be really lonely," Morton says. "I've seen a lot of community in California .... they're searching for people they can camp out with and caravan with."

A lot of van life connections start with people swapping conversion tips and camping recommendations online. Sometimes that leads to planned in-person meetings. But more often, nomads just find each other along the way.

"You see another van in a parking lot somewhere and you're instantly bonded," says Megan Cable, an Oakhurst accountant and van-lifer. "It's, 'You look like you're doing what I'm doing!'"

Russell says it starts with a shared dream.

"There's automatically kinship that's formed when you're willing to sacrifice certain comforts for the enjoyment of exploration and adventure and being outside," she says. "When there's folks that know that's what they'd prefer, you already have a lot in common."

Most who take to van life are hoping to minimize their carbon footprint, though there are mixed opinions about whether it's greener than a house. Others do it to escape the corporate rat race and meet new people.

The lifestyle is even generating its own microeconomy. Some travelers set out to become "influencers," who make money by documenting their travels and tagging certain gear companies on social media. Others run van life websites and apps.

But it isn't for everyone. Jose Romero, now 26, got turned onto the nomadic lifestyle while working in Yosemite National Park a few years ago.

Inspired by the hikers and climbers hanging out roadside, he quit his full-time job and bought a used van. He spent seven months adventuring, while earning stipends as a freelance photographer for outdoor brands, before calling it quits.

"It just all hit me at once," he said. "I could keep doing this for my 20s, but I'm going to hit my 30s and be making no money and won't have any useful skills or be able to buy a house in the Bay Area," he says.

Winograd of USC says the desire to settle down will ultimately make many van lifers retreat from the road. He says for most, the white picket fence is still the dream. Three quarters of California millennials say home ownership is a long-term goal, according to his latest research.

"(The van life) is an echo of a boomer-era, hippie culture, riding around in VW vans and living off the land and so-on," Winograd says. "It's not the way (millennials) think of living a good life. And those few who do are into this minimalist culture, and that tends to be a fringe element of the rest of the generation."

Still, people in the movement find ways to make it work. Wild is a wedding photographer who guides couples to hard-to-reach photoshoot locales.

He says he doesn't have any savings right now, but it should be more feasible next year, when he starts flipping converted vans. He's been reading up on investment and spending more of his non-driving time building his business.

What he likes most, though, is the sense of community. A plank of wood just above the van's sliding door is covered with Sharpie marker scribbles, signatures from fellow travelers who've popped into the van to say hello. When he's feeling lonely after a few days of driving or camping, he can hop on Instagram, find another van lifer, and try to arrange a meet.

"And what I love is anytime you see someone doing this, you know at least they're comfortable taking risks," he says. "I really want to know, 'What are you really doing this for, what's the thing you're trying for? Is it happiness? Is it minimalism? Is it just a break from your real life? Are you escaping and running from something?' Those things are really interesting to me."

Wild plans to keep living this dream. Unless something, or someone, pulls him into a different one.

"I think the dating thing will eventually stop me," he says. "I'll meet someone who's cool enough that I'll stop traveling, or cool enough that they'll want to travel with me, and either one would be fine."

The California Dream series is a statewide media collaboration of CalMatters, KPBS, KPCC, KQED and Capital Public Radio with support from the Corporation for Public Broadcasting and the James Irvine Foundation.