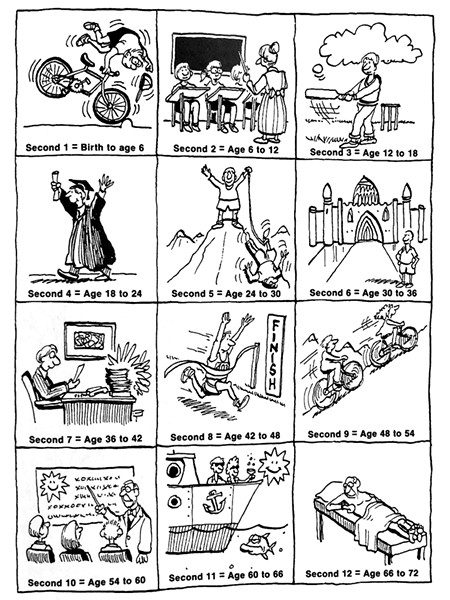 Courtesy of the author Barry Evans' own 12 images, one for each 6-year span of life, from his book Everyday Wonders.

Human lives generally last for 2 billion to 3 billion seconds; the universe is nearly 14 billion years old. Looking at those two statements on my laptop, I feel slightly giddy. I have a faint whiff of what the first statement means and very little understanding of the second. If you feel the same, here's a way I found to help glimpse "all of time," the period that's elapsed since the time-zero, the Big Bang (neither big nor a bang) some 13.7 billion years ago.

The idea is to compare three very different periods: 12 seconds — one breath's worth — of time; 72 years, the average human lifetime, give or take; and 13.7 billion years, the age of the universe. Do the math and there are as many breaths in a lifetime as there are lifetimes in the age of the universe (about 100 million). The exercise is to imagine that your life lasts just 12 seconds, with each second standing in for six years of your life. And the best way to do this is with imagery, creating one picture for each six-year period. So: in the first second, you're born, you learn to talk, you start kindergarten (create a mental image). By the end of your third second, you're thinking about university or a job (mental image). A couple of seconds later, you might be married or having kids, working and paying rent or mortgage. At 10 seconds, you're retirement age, and at the end of 12 seconds, you breathe your last breath.

If visualization isn't your strong suit, divide a sheet of paper into 12 frames, as I've done above, and draw a significant event for each of those time periods, anticipating your future if necessary. When I did this, for instance, I picked a memorable moment when I stood at the summit of an icy volcano in New Zealand for my "18 to 24" picture frame. That adventure left a powerful impression on me, so it's easy to use it to encompass those six years into a single second.

When you've got your pictures, mental or on paper, imagine living your entire life in 12 seconds. Count "one" and look at the first frame; at "two" move on to the second; and so on. At "12," picture yourself gracefully (or defiantly, your choice) expiring. When you feel comfortable with the idea of a 12-second life, make the jump: As those few seconds are to your actual life, so your life is to the age of the universe.

Barry Evans (barryevans9@yahoo.com) is gobsmacked every time he does this exercise. He prefers he/him pronouns.