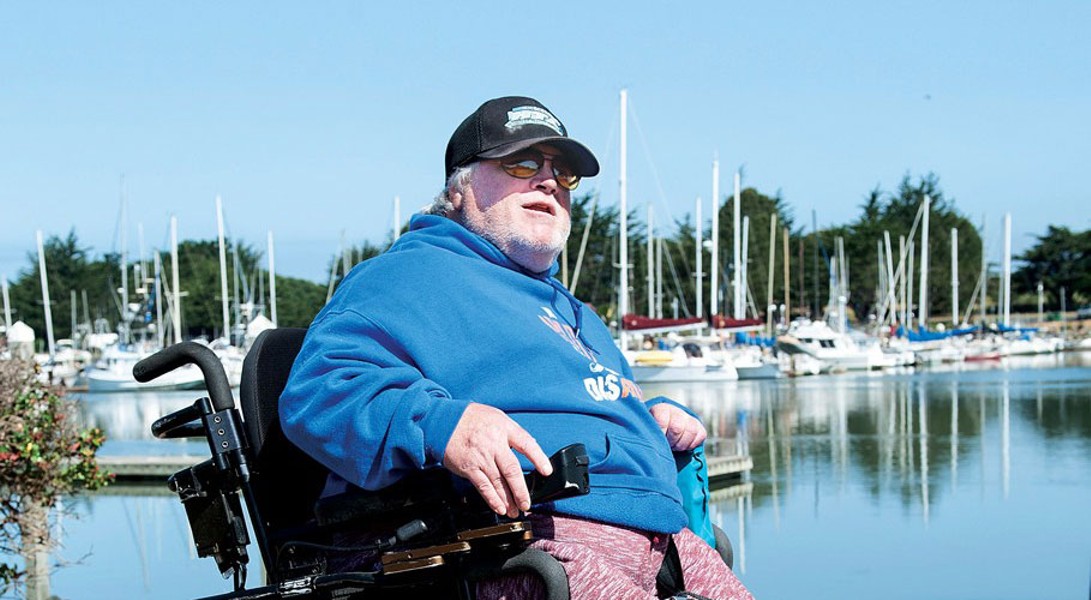 Photo by Mark McKenna Charlie Bean on the Eureka waterfront in 2016.

California has lost one of its fiercest and kindest advocates.

Charles L. Bean Jr., who took a life-changing accident that left him quadriplegic as a young man and turned it into a relentless mission to make the world a more equitable, accessible place for all, using his soft, firm voice and kind smile to improve the lives of people with disabilities, died in his home the evening of July 16, with his wife, Carolyn Bean, by his side. He was 64.

"The people he was advocating for saw themselves in him and vice-versa, and that's a really beautiful thing," says Cindy Calderon, who worked alongside Bean and came to consider him a dear friend. "He just had this way about him. He always liked people, was always kind and liked to laugh. And he just wanted things to work."

A Yurok Tribal member born Sept. 12, 1956, Bean grew up in the Hoopa area, getting his first job at the Hoopa grocery store at the age of 17 and graduating from Hoopa Valley High School in 1974. Shortly thereafter, he enlisted in the U.S. Army but his service was cut short in 1975 when a motorcycle accident severed his spinal cord.

But Bean would soon become determined not to let his wheelchair define him or even slow him down. Humboldt County Public Works Director Tom Mattson chuckles, recalling how decades later he would regularly find himself yelling at Bean to slow down as he zoomed through one of Old Town Eureka's many alleyways in his motorized wheelchair, which bore a sticker on the back reading, "Does this wheelchair make my butt look big?" well beyond the posted speed limit of 15 mph.

"Man, he could make that thing fly," Mattson says.

Shortly after the accident, Bean committed himself to his studies and received an associates degree in accounting from College of the Redwoods, which he turned into a career in finance and consulting with the United States Forest Service, as well as a 10-year stay in China, where he taught English and adopted his daughter Bien Hou. In his younger years, Bean would wheel his manual chair from his Eureka home over the Samoa Bridge and along State Route 255 to visit the bars in Arcata. In 2016, he told the Journal that the "trip back sobered you right up." Some years later, he and his brother Kenny wheeled from Blue Lake to Willow Creek to raise awareness of the Americans with Disabilities Act of 1990.

Ultimately, making sure America lived up to the promise of the act would become an all-consuming mission for Bean, one he approached with passion, wit and — most of all — kindness.

Mattson says he first met Bean shortly after being tapped to direct the public works department in 2007. The county was woefully behind in bringing its facilities, programs and services into compliance with ADA mandates — so much so it would enter into a settlement agreement with the United States Department of Justice in 2008, pledging to make a host of required upgrades, a pledge the county has yet to fully make good on. Bean's relationship with Public Works easily could have been a confrontational one, Mattson said, but it never was.

"He was a staunch advocate but also a strong, willing partner," he says. 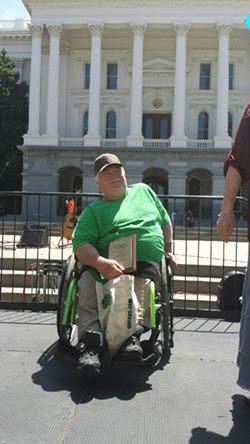 It was that spirit of partnership that saw Bean testify in favor of county funding requests, advocate for its efforts and consult with county staff.

In February of 2013, Bean even put on a training for Public Works staff with one of his old manual wheelchairs, giving them a first-hand insight into the experiences of those with disabilities trying to navigate public facilities. According to staff, the experience pushed the county to not just meet minimum accessibility standards, but to exceed them and improve access wherever possible by minimizing slopes, planning for wider areas between obstacles and increasing visibility from all angles.

"It changed our way of looking at things," Mattson says of the training. "He was the kind of person that could do that, take people and change the way they saw the world."

For his part, Bean told the Journal in 2016 that so much of his work was simply about making sure those making decisions hear from the people — all of them — who will be impacted.

"People tell me all the time, 'I made this for you,'" he said at the time of various paths and ramps designed to be ADA accessible. "And I say, 'You did? Why didn't you ask me what I needed? Stop looking at the chair, look at the people."

Bean had a relentlessly persistent — even stubborn — way about him. The county's public works building has two entries, Mattson recalls, explaining that one allows wheelchair access directly to his office while the route through the other is blocked by stairs. Bean, he said, always wound up at the bottom of those stairs when he'd come to visit Mattson and would call out for the director's attention. After several visits, Mattson says he asked Bean why he always chose that route into the building when he knew there was another.

"He said, 'Because when I get to the stairs, I can yell at you and you come,'" Mattson recalls with a laugh, quickly adding that it was Bean's way of constantly reminding Mattson of the barriers facing those who depend on a chair for access. "He's just the kind of guy who made this a better community to live in. He was just dedicated to what he was doing and he was always in a good mood."

While Bean's seemingly unflappable mood is a hallmark in the memories of those who knew him well, it was born in his desire to help people and make change. In a 2016 interview with the Journal, Bean said he would wake up depressed in the mornings but shake it off by remembering how much work there was left to do.

Calderon, who vividly remembers first meeting Bean back in 2006, when he rolled into a local transportation conference with a Pepsi in hand and "another Pepsi for later in his knapsack," says she knew he was often struggling through a series of health issues that had plagued him since that motorcycle accident.

"I watched him work so many times in pain," she says. "He didn't say he was in pain or show it, but I could tell. But he just had this way about him. He always liked people."

And it was the people — the clients and consumers of the various advocacy agencies he worked for over the years — that drove him, Calderon says. She adds that when she and Bean worked together in the advocacy department of Tri-County Independent Living, Bean would often zip down the hall when someone showed up with an issue.

"Even though it wasn't his job, he would oftentimes be the first one to go out to the lobby to greet a consumer," she says. "He was just interested in people."

And that's what ultimately made Bean special, Calderon says, as he worked his way up the California In-home Supportive Services Consumer Alliance (CICA), a statewide collaboration of officials tasked with implementing and improving the program that provides in-home care to those with disabilities, ultimately becoming the northern region's executive director. As its only paid employee, Bean served as the point person in overseeing operations in more than 30 member counties every year.

"He was so organized and hyper- focused," Calderon recalls. "He was the consummate advocate. He related to people. That was one thing about him — he always tried to see both sides, whereas I, as an advocate, was more bullheaded." 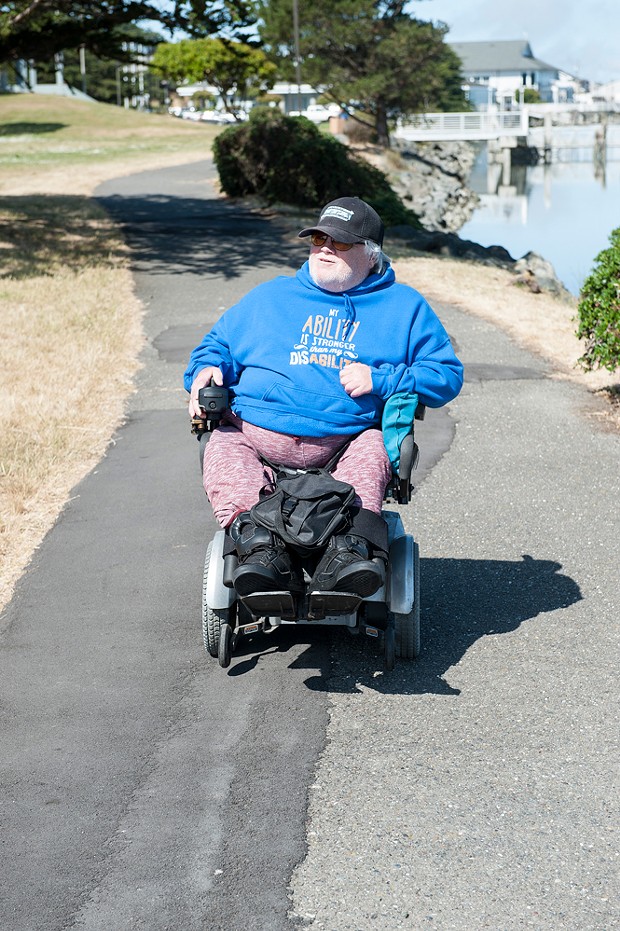 But while Bean was quick to build bridges and consensus where possible, his focus never wavered from those he advocated for, the people looking for help navigating public spaces or staying in their private homes. When the state's IHSS program came into political crosshairs in the early 2010s due to fraud allegations, prompting the state to introduce unannounced home compliance checks, Calderon says recipients were terrified. But Bean was upfront and direct with them, she says, and wrangled a high-ranking state official onto a conference call with them to make sure "they could actually ask questions of people at the top."

Lisa Marie Leon, the transition coordinator at Tri-County Independent Living, says Bean was simply the perfect person for the role.

"He was the right person to do it because he was living it, and he was able to share his passion, share his strengths, share the weaknesses and work for change," she says. "He lived his life to the fullest with passion and purpose, and he cared about people with disabilities and definitely made a change in their lives."

Evidence of Bean's work is everywhere in the community, she says, pointing to the lower help desk in the county human resources department, the bus schedules posted just a bit lower to the ground so they're readable for those in wheelchairs, the handrails installed at the courthouse and the raised platform in the Humboldt County Board of Supervisors chamber, which allows everyone — even those in wheelchairs — to approach the podium, look their representatives in the eye and have their voices heard because "everyone is equal, everyone has right to participate."

But Leon says it was Bean's passion for people that struck her the first day they met at Tri-County Independent Living.

"I just fell in love with him the day I met him," she says. "I loved him immediately. He always has a smile on his face, always has a positive attitude and is in good spirits. Always willing to help. He just has a huge heart."

And those close to Bean have countless examples of that big heart in action — from the cookies he'd bring into the office to the gifts he'd give co-workers and their kids; gifts for Christmas, birthdays and even Valentine's Day. But Leon and others say Bean's bulging heart was perhaps most apparent in his work. Leon points to a "Roll and Stroll" event in late 2018 designed to raise money for accessibility improvements at Sequoia Park, where Bean would later consult on making sure the recently opened Redwood Sky Walk would be not only accessible, but user-friendly. Bean worked hard coordinating the 2018 fundraiser but was hospitalized shortly before the event. Leon says an undaunted Bean convinced his doctors to discharge him so he could attend the event, pledging to return immediately after to be re-admitted.

"That's how strong his passion was," she says. "He was just an incredible man." 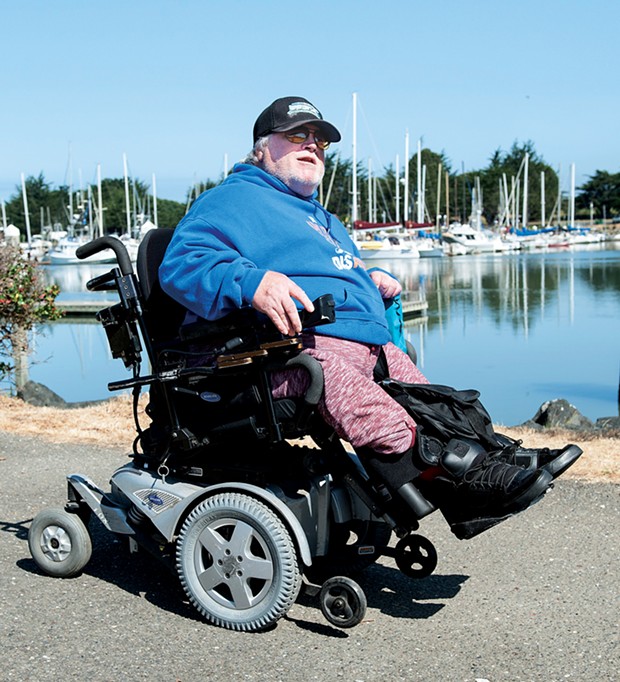 A memorial for Bean will be held at Eureka's First Presbyterian Church at 1 p.m. on Aug. 7, and all who knew him are welcome to attend. His family asks that donations of flowers be sent to the church in advance of the service, and donations in his honor can be made to CICA (181 Anne Way, Los Gatos, CA 95032). In a brief statement to the Journal, Carolyn Bean, Charlie's wife and caretaker under the IHSS program he fought to protect and expand, says her husband was the love of her life and will be dearly missed by all who knew him.

In his final years, though many didn't know it, Bean had been in and out of the hospital and undergone numerous surgeries and procedures. When the end came, it seems fitting he was at home, receiving care through a program he'd fought tirelessly to expand and protect for years.

"He was larger than life," Calderon says, adding that Bean's impact stretched well beyond Humboldt County, to thousands of advocates and people living with disabilities — people like him — throughout the state. "He was always hyper-focused on the issues he cared about. And he cared about the right to remain at home and not be warehoused in a skilled nursing facility."