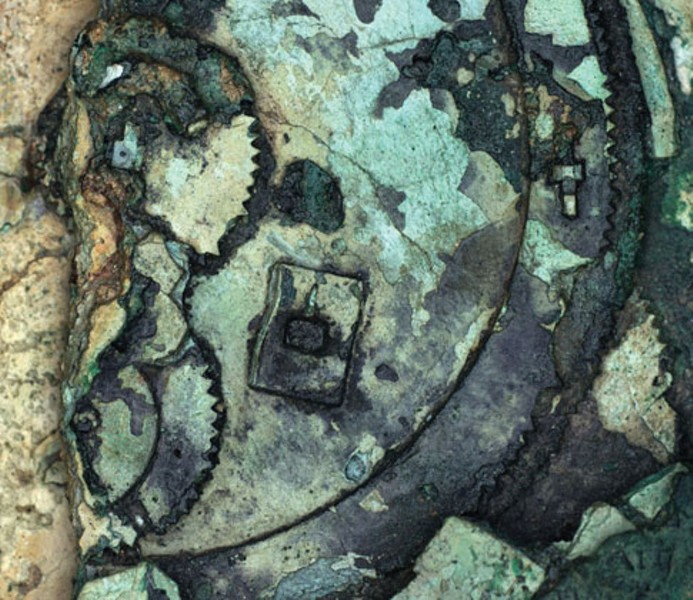 Part of the mechanism, as captured by Hewlett-Packard's digital imaging system. The "pin and slot" epicyclic system referred to in the text is at 5 o'clock on the bottom gear.

How it might have originally looked. On the left are dials for the positions of the sun, moon and planets. The rectangular slot was for a crank which the user turned to enter the date.

For 2,000 years, it lay 150 feet below the Mediterranean Sea. Accidentally found by sponge divers in 1901, it's been the source of speculation and wonder to the present day. The first time I heard about it, I was convinced the whole thing was a hoax. In fact, it's arguably the single most impressive artifact we have from the ancient world, and by far the most elaborate artifice that we know of from any time prior to 1300.

The Antikythera mechanism is about the size of a thick phone book. The divers recovered it, along with a rich trove of bronzes, pottery and glassware, from a Roman merchant ship that was wrecked in about 60 BCE off the rocky coast of Antikythera, Greece. It consists of bronze gears and bearings artfully sandwiched between two inscribed brass plates around which pointers rotated. The user turned a crank on the side to set the mechanism, which might have resembled a complicated clock from the 18th century.

It's not a clock, though, but a mechanical computer-calendar, built around 150-100 BCE. Containing at least 30 precisely cut toothed gears (up to 40 more are lost), it was designed to accurately show the positions of the sun, moon and planets for any date, as well as phases of the moon and predictions for solar and lunar eclipses.

The technology of the mechanism is astonishingly sophisticated, best seen in how its designer (Archimedes, perhaps) embodied the moon's motion. Although the ancient Greeks didn't know that the moon's orbit is an ellipse -- that had to wait for Kepler, nearly two millennia in the future -- they did knew that the moon appears to speed up and slow down in a predictable rhythm relative to the background stars. This rhythm was incorporated into the mechanism using an ingenious pin-and-slot epicycle gear system that accurately imitated what we now know to be elliptical lunar motion.

Subsequent to the shipwreck, the mechanism's finest hour came five years ago, when it underwent a CT (Computed Tomography) X-ray scan in an eight-ton machine built specifically for the job by X-Tek Systems (part of Nikon Metrology). The mechanism, now in 82 fragments, is housed in the National Archaeological Museum of Athens, and because of its fragility, X-Tek transported their cumbersome device to the museum, rather than the other way about. The results of the scan have revealed many more details than were previously available to researchers, including about 2,000 Greek letters: directions for its use! If you've ever lost a user's manual, you'll appreciate the wisdom of putting the instructions right on the gadget itself.

Check out http://www.etl.uom.gr/mr/index.php?mypage=antikythera for graphic simulations of how it worked. More information can be found at the web site of the Antikythera Mechanism Research Project: http://www.antikythera-mechanism.gr/

Barry Evans (barryevans9@yahoo.com) is still gobsmacked when he thinks about the Antikythera mechanism. He thanks Dr. Tony Freeth for help with this article.

Part of the mechanism, as captured by Hewlett-Packard's digital imaging system. The "pin and slot" epicyclic system referred to in the text is at 5 o'clock on the bottom gear. © 2005 Antikythera Mechanism Research Project.

How it might have originally looked. On the left are dials for the positions of the sun, moon and planets. The rectangular slot was for a crank which the user turned to enter the date. © 2010 Tony Freeth, Images First Ltd.