The Basket and the Blade 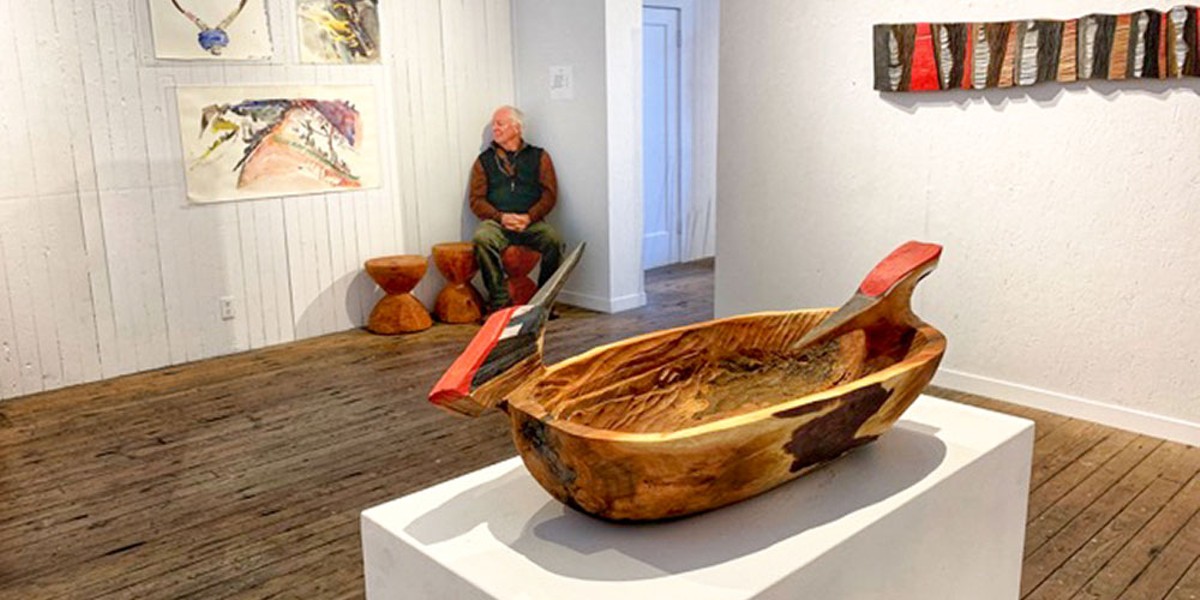 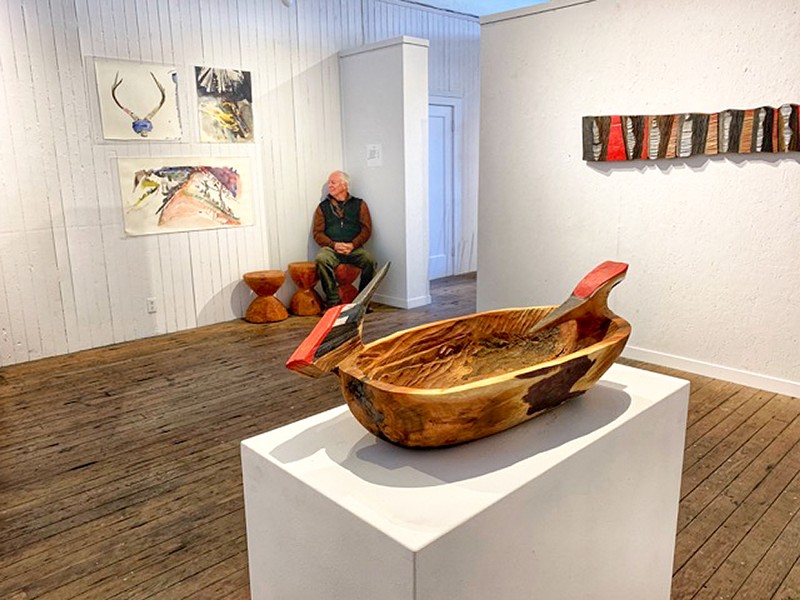 Photo by William Pierson Benson sitting among his pieces at Piante gallery. 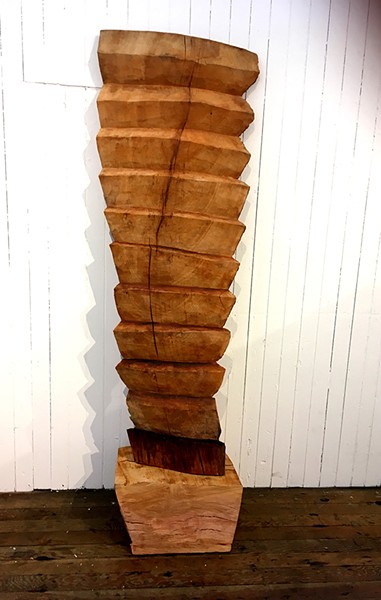 I have reiterated tendencies, certain go-to forms," Robert Benson said. "It's like with any artist: You get caught up in your own style. With me, it's the tension between angles and curves."

The trope has been evident "forever" in art made by Indigenous people of far northwestern California, as Benson, a Tsnung'we elder, observed. In his new exhibition at Piante Gallery, curving surfaces alternate with faceted points in sculptures and paintings. These forms show up on blades and baskets: utilitarian objects that are invested with metaphoric significance within traditional northwest California cultures.

The space is dominated by "Burden Basket and Burdens," a huge open-weave basket of traditional Indigenous design, built on a warp of hazel wands and used, as the name indicates, to carry burdens. Those burdens make an appearance as grotesque wall reliefs.

Burden baskets, Benson said, were ubiquitous among Native peoples of this region. Distinguishing features of this utilitarian form include large size, open weave, plain design and a built-in loop that allows the basket to be attached by a line around the wearer's forehead. "You could put 50 to 75 pounds in these burden baskets and a little old lady could carry the load this way. ... It's a form that permits surprising weights to be carried by people who are not buff in the traditional sense."

Benson's basket is unfinished. Even the toughest little Hupa, Karuk or Yurok old lady would be hard pressed to budge it once laden, thanks to its monumental scale. It has been scaled up, one assumes, because supersized is the only scale that seems appropriate for the cartage of 21st century Americans' psychic woes. Burdens of the mind and spirit take shape in crudely carved faces hacked from burls and pine knot that cluster on the wall facing the basket, leering and grimacing like a pack of demons at bay.

"It had been in the back of my mind, that I would like to weave a basket," Benson explained. He knew he would need a supply of highly specific natural materials in order to do so — primarily green, springy hazel wands used by traditional basket weavers to form the basket's warp, the stiff vertical shafts around which the flexible weft is twined. This summer he was hiking along a watershed near Willow Creek when, suddenly, the materials presented themselves. "I was in a hazel grove, surrounded by so much hazel as far as the eye could see. And it was like the hazel spoke to me," he continued, chuckling. "I swear to God, it was like the hazel said: 'Let's do this!' As though it were issuing a challenge."

Benson labored along with artist Becky Evans, his wife and sometimes collaborator, at the task of weaving unwieldy 10-foot hazel wands into a matrix. Technical challenges did not fail to manifest. "There are more than 100 of the warp sticks that go around to form the vertical ribs of the basket and it took five to eight minutes just to peel each of them. So I had this idea that we would just (make a basket) any old way but Becky wouldn't let me," he recalled. "She said we had to do it the traditional way, by building from a central base." That way the outcome would be a monumental, scaled-up replica of a traditional Karuk, Yurok or Hupa production.

Scalar exaggeration also plays a role in "Blade," a king-size reproduction of the blades used in ceremonial observances. While those blades are made by flaking obsidian, this one is carved from a 6-foot slab of Douglas fir. Adze marks glint along its surface. Wood grain traces a lateral current from one end to the other. Black lines move the eye along the bias and a leading edge of cobalt blue recalls the effect of a Steller's jay feather seen in raking light.

The Yurok story about the origin of obsidian blades posits that the first blade swam upriver like a salmon and had to be caught. Here, the fish-like aspect of the laterally flattened torpedo shape is made more evident through the eye-level hang. Seeing from this vantage point brings the form's innate complexity into view; it unites swelling volumes with its hard-edged facets in a way that seems to defy logic. You get some sense of why Indigenous peoples of this region would think of the form as sacred and how ritual display of especially large obsidian blades became a central feature of the locally practiced world renewal ceremony known as the Deer Skin Dance.

"In the Deer Skin Dance today, the dancers cross in the middle, raising obsidian blades to show them off," Benson said. "But allegedly, back in the day, that's not how the dance went. Back then they would clash the blades together and the blades might make a spark — recreating the origin of the world in miniature. Because that's how the traditional stories explain the origin of the world: Two flints collide and give off sparks. If the spark happened, that would mean the ceremony was done right."

Once the 6-foot plank had been cut from the fallen Douglas fir he'd discovered and retrieved from National Forest Service land, Benson turned to a work in his collection for inspiration. This was a drawing of a blade made in 1986 by Charlie Burns, a Yurok elder from this area who had been involved as a dancer in the mid-1980s restoration of the ancient Jump Dance ceremonies. Benson reconnected with Burns, an old acquaintance, and proposed a collaboration — the two would work together to carve and paint the sculpture. Burns' detailed, boldly graphic rendering of two obsidian blades hangs adjacent to the carving it inspired.

Editor's note: This story has been corrected to refer to the Deer Skin Dance rather than the Jump Dance.