The Battle of Orleans 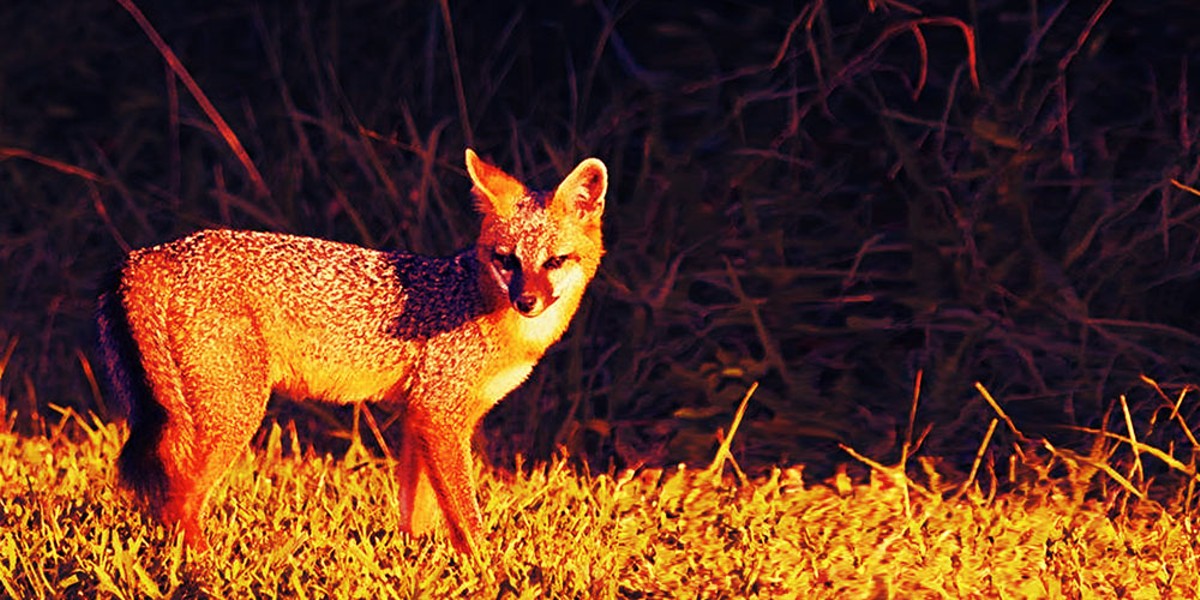 It was a warm night in early August, and Todd Raffensperger had fallen asleep on the couch watching TV. Raffensperger has no air conditioning and takes medication that makes him sensitive to heat, so, as usual, the front door was open. When he woke in the middle of the night, it took a few minutes to register what was out of place: A strange, pointy pair of ears atop an unfamiliar profile with two vulpine eyes staring at him in the dim light of his living room.

"It was just kind of sitting there with almost a grin on its face," Raffensperger said of the fox, which had been spotted earlier that week in Orleans chasing a neighbor's horses. "It seemed friendly. I wish I hadn't reacted how I did."

Raffensperger yelled at the fox and then "tried to elbow it." The fox bit him. He finally managed to get it out of the house, although it attempted to come back in several times. The fox was later captured and brought to Humboldt County Environmental Health, where on Aug. 5 it tested positive for rabies. Then Raffensperger's treatments began.

While it looms sinister in popular imagination, rabies is completely treatable in humans if caught in time. Raffensperger said the series of shots he received was pretty painless and – contrary to rumors – the injections are not administered in the stomach. Raffensperger, who suffers from amyotrophic lateral sclerosis (also known as Lou Gehrig's disease), is used to being poked and prodded.

"It's fairly painless, really not that bad of a thing," he said, with his soft Wisconsin accent, adding that his neighbors had jokingly started calling him "Rabid Raff."

But Raffensperger's concerns didn't end with his own health. He also had a colony of cats and kittens, offspring from a single female left with him several years ago. Raffensperger says he's not really a cat person, but unneutered felines tend to multiply quickly, and soon there were 24 cats in and around his home.

"They're nice cats," he said. "They're well behaved and stay outside. That rabid fox traumatized them."

It is mandatory in California for dog owners to vaccinate their pets against rabies, but the same standards do not apply to cats. Raffensperger, who lives on a fixed income, could not afford to spay or vaccinate the quickly-growing colony. He contacted some local rescue groups when the population began to get out of hand but, mostly due to a lack of transportation, did not use their services.

According to the Centers for Disease Control and Prevention's website, "Unvaccinated dogs, cats, and ferrets exposed to a rabid animal should be euthanized immediately. If the owner is unwilling to have this done, the animal should be placed in strict isolation for six months and vaccinated one month before being released."

But control and containment of animals potentially exposed to rabies seems to rely heavily on the help and cooperation of owners.

According to a statement from the Humboldt County Department of Health and Human Services, the environmental health division "is responsible for overseeing all rabies related domestic animal (cat, dog, livestock) quarantines."

Environmental Health did put out informational fliers in Orleans, asking members of the public to call with questions and concerns, but Raffensperger's cat colony was not quarantined.

According to the county website, the county animal control division is responsible for "enforcing compulsory rabies vaccination and quarantine ordinances." The sheriff's office, which oversees animal control, responded to our inquiry by saying that, while it assisted in this case, the environmental health department was the lead agency.

Rob Patton, animal control facilities manager for the county shelter, said that how a case such as Raffensperger's is handled "really depends on the situation."

"We suggested he keep an eye on it," Patton says, adding that Raffensperger was advised on what symptoms to look for, including behavior changes such as increased vocalization, appetite loss or aggression. "If they become more violent, or more lethargic, if their behavior changes at all, you should get that animal observed and possibly scanned."

Rabid foxes are fairly rare, according to the latest statistics available from the CDC. In 2014 they made up only 1 percent of total cases in wild animals, with bats and skunks being more common carriers of the disease. Of the 6,000 cases of rabies in animals reported across the United States and Puerto Rico that year, 59 were dogs and 272 were cats, and only three such cases were in California.

Cases of rabies in Humboldt County over the last 10 years have been consistent with the state and national statistics, with the exception of 2009, during which there were 36 confirmed cases of rabid foxes.

Humboldt County has also seen an uptick in rabies cases this year. A teenager in Fortuna was treated in May after being bitten by a fox that later tested positive for the disease. A dog that was exposed to rabies after fighting with a rabid skunk was euthanized in July. It was the first time a dog had tested positive for the disease, which causes inflammation of the brain, seizures and eventual death, in more than five years.

"Rabies is endemic to Humboldt County and is always present in the mammalian wildlife population at some level," said Amanda Ruddy, a supervising environmental health specialist in DHHS' Division of Environmental Health, in an email to the Journal. "Disease prevalence typically remains relatively low but levels fluctuate cyclically following the rise and fall of various wild animal populations which are capable of carrying the disease. Currently, we are seeing a spike in rabies cases throughout the county."

Raffensperger, who was given a diagnosis of two years to live seven years ago, was healthy enough to feed, care and cuddle with the cats, but not enough to trap and quarantine all two dozen of them. He worried about the disease spreading through the cats and possibly causing an outbreak in his small town. He claims he was instructed to contact nonprofit animal rescue agencies such as the Humboldt Spay Neuter Network for help with vaccinations and population control.

"I just flipped," said Jennifer Raymond, director of HSNN, adding that she had tried to help Raffensperger with his cat population before the rabies scare. "We offered him every bit of help we were able to."

But working with animals potentially exposed to a deadly, infectious disease is far and above the call of groups like HSNN, which are largely volunteer-based and concentrate on spaying, neutering and, occasionally, rehoming animals.

"We have no training in this," said Raymond. "I would like to think that animal control officers get some training and they have some equipment. We could have gone out there and got his cat ... then we would have had all our workers exposed to a very deadly disease. My feeling is when we call our animal shelter they do their very best to do as little as possible."

For its part, animal control has stated in the past that government run shelters are almost never self-sustaining. (See "Strays," our cover story from Nov. 19, 2015.) Spaying a large dog alone costs around $100, and adoption fees top out at around $150. While the Humboldt County shelter has a relatively low euthanasia rate, it has also been running full in the last year, and has at several points sent out bulletins that adoptable animals were at risk for euthanasia due to overcrowding. The emergency medical fund, which pays for veterinary expenses above the $250 per animal allocated by the county, has been dry for several months. Some rescue advocates have stated this means that animals with large veterinary bills will automatically be euthanized. Patton disputes this, saying that the money is reallocated from other expenses. But with a budget of around $900,000 a year, these resources are finite, and the county relies heavily on nonprofit rescue groups to stem the tide of overpopulation.

"We run off of government money which is tax-base related," said Patton. "It would be nice if we could operate as a business but we're not a business."

Meanwhile, Raffensperger monitored the cats and kittens anxiously as he tried to regain his own health. Within a few weeks, he noticed that one had begun behaving oddly: It was louder, more aggressive, acting strangely. As a former farm worker, he had some experience with what was necessary, but says what came next was entirely against his nature. He killed it himself and called the county to come and test the body.

On the morning of Friday, Sept. 2, the offices of the Humboldt Spay Neuter Network received a surprise visit. An animal control officer arrived, requesting to use all the organization's live traps. Raffensperger's cat had tested positive. The entire colony had to be euthanized. At first, some of the volunteers resisted, saying that euthanizing animals is contrary to their mission, but Raymond eventually gave in and handed over the traps.

Later that day, the county Department of Health and Human Services issued a press release encouraging owners to vaccinate their pets.

"Public Health would also be interested in hearing from anyone in the Orleans area about cats or dogs showing evidence of what could be symptoms of rabies, such as seizures, unstable gait or abnormal behavior," the press release states.

DHHS's public health nursing and environmental health staff  is continuing to provide outreach to residents of the Orleans area, going door to door in some cases, stressing that inadvertent, unreported contact with potentially rabid animals — especially feral cats — can be fatal. The department has also scheduled a town hall meeting for 5 p.m. on Sept. 12 at the Karuk Department of Natural Resources to provide information and answer questions from the public. (Those seeking more information can also call 445-6215 or visit the department's Facebook page.)

When the Journal spoke to Raffensperger on Tuesday, he sounded philosophical about Friday's events.

"It's a blessing and a curse," he said, adding that there were about four cats left and he planned to work with HSNN to get them spayed and neutered. "I don't have 24 animals to feed anymore. Maybe it's a little more dealable. I don't have to worry about giving the neighbor's dog rabies."

"Hopefully a bunch of people got coordinated who aren't coordinated," he said, referring to the multi-agency response to the issue. "There are so many different agencies and different concerns. It was interesting to see who showed up and cooperated. I think it was a success in terms of public education and intergovernmental cooperation."

Editor's note: This story was updated from a previous version to correct a quote that was mistakenly attributed and include additional information about DHHS's ongoing outreach efforts.