The Beautiful Disaster of My Medicated Mozzarella Fail 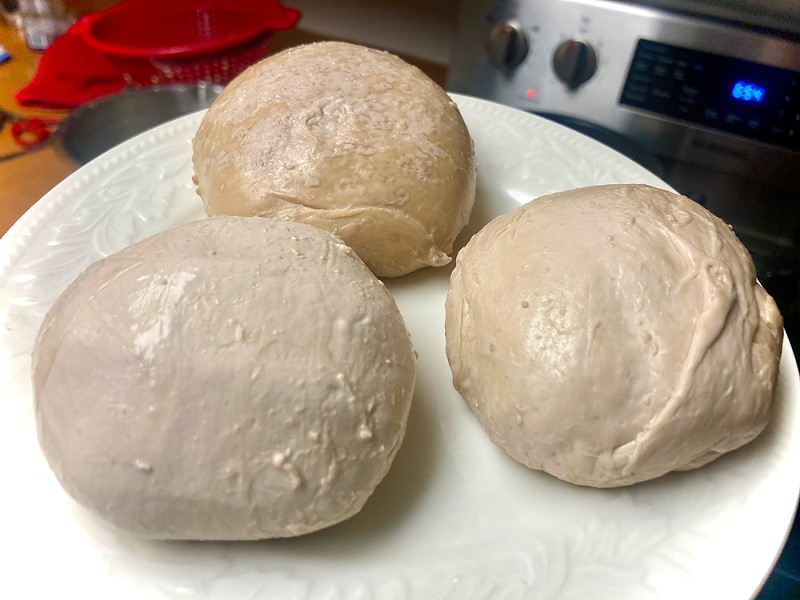 My reach has exceeded my grasp. I flew too close to the sun. Mistakes were made infusing what should never have been infused. And now the ghosts of three sad blobs of homemade mozzarella haunt me with the echoing thuds they made when I threw them into the trash.

Let's back up to give some context for this lunacy. A few months back I attended a virtual cannabis pairing dinner with Los Angeles-based Food Flower Future, cooking along as a chef live-streamed. Some of the cannabis-infused products we used created somewhat of a monster in me — a ravenous canna-monster. The product that did it was a cannabis and chili-infused finishing oil from Potli — it was gourmet and unexpected, a nice elevation from a standard cannabis-infused olive oil. It was all downhill from there. Under the banner of "research," my friends and I bought every infused item we could find so we could flex our creativity in the kitchen together.

Then came the Bong Appetit episodes. We went straight down a rabbit hole of YouTube infused-cooking videos and convinced ourselves we were now Michelin-level chefs capable of infusing anything and everything. We made infused olive oil, butter and sea salt. We used them on pasta, pizza and garlic bread. All delicious. The burger, though — the burger was the tipping point into madness. Canna-butter pooled in the patty, smothered by the melty cheese on top, and I wondered if the cheese was becoming infused during the baking process ... infused ... cheese? Eureka! Infused cheese! Clearly this is the best idea I'd ever had. I had always wanted to make homemade mozzarella, so why not make it cannabis-infused?

My friend and I set out on a Saturday morning to procure everything we needed for our mozzarella-making mission. The North Coast Co-op was a bastion of good vibes, offering everything non-psychoactive we needed, from the rennet to the nut-milk bag to my favorite whole milk from Humboldt Creamery. It was all falling into place — this was going to be the best mozzarella anyone in the history of the Earth has ever made; we could tell.

After prepping the flower by grinding it coarsely, spreading it on a baking sheet and baking it for about 30 minutes at 200 F, known as decarbing it, into the-nut milk bag it went. Then it steeped with the milk in a crockpot on high for an hour. Our first clue things had gone terribly awry was the color of the milk. After an hour of infusing, it was a pinkish brown. Perhaps it was a mistake using ground flower for our infusion instead of concentrate. I think I actually convinced myself the color would cook out somehow. Once we added the citric acid and started heating it up, it added a gray color to the mix. Pink, brown and gray curds. "Sure, Jessica, it will all cook out," I said to myself. At this point, we were several hours deep in the process and there was no turning back. After a little more work, we finally had three perfect little balls of mozzarella formed.

When I say perfect, I mean the technical aspects of the cheese were all on point, for which I credit local home chefs Kelly and Matthew Cook, whose Two Cooks in the Kitchen cooking series gave the perfect tutorial for making mozzarella. The texture, the moisture level — everything was just as it should have been. It was beautiful, except it was now brown.

"Please don't taste brown, please don't taste brown," I chanted to the cannabis gods or the cheese gods, or to whomever was listening (in retrospect, it is clear that no one was listening). I tasted a slice and there was really no getting around it — it was awful. It tasted like hay and dirt and old, dead plants. Yet, clearly still in denial, we topped one half of a French bread pizza with it, hoping the pesto and veggie toppings would hide the horrific flavor, but, alas, they did not. This cheese was beyond saving. This cheese was an abominable disaster.

It was somewhat of a beautiful disaster, though. I always try to see the silver lining in a kitchen fail. This experience showed me I can actually make a technically perfect mozzarella with a few ingredients and just a little time. It also showed us how easy and fun it is to laugh at yourselves, even when you fail in the pursuit of something delicious and new. Next time, I'll forego the ground flower and use flavorless distillate or THC isolate instead — this would eliminate the overwhelming plant and terpene flavors that masked the pure taste of the milk. Another foodie also suggested blanching the flower first before infusing, which should remove some of that off-putting flavor, too — a great tip if flower is all you have to work with.

Lastly, to the cow who sacrificed her milk for this sad, sad mozzarella — I'm so sorry for what I've done. Please know it was in the pursuit of cheesy, weedy greatness. I'll make it there someday.

Jessica Ashley Silva (she/her) is a foodie and cannabis propagation specialist, and works as a processing manager in Arcata's cannabis innovation zone.