The Best of Fans 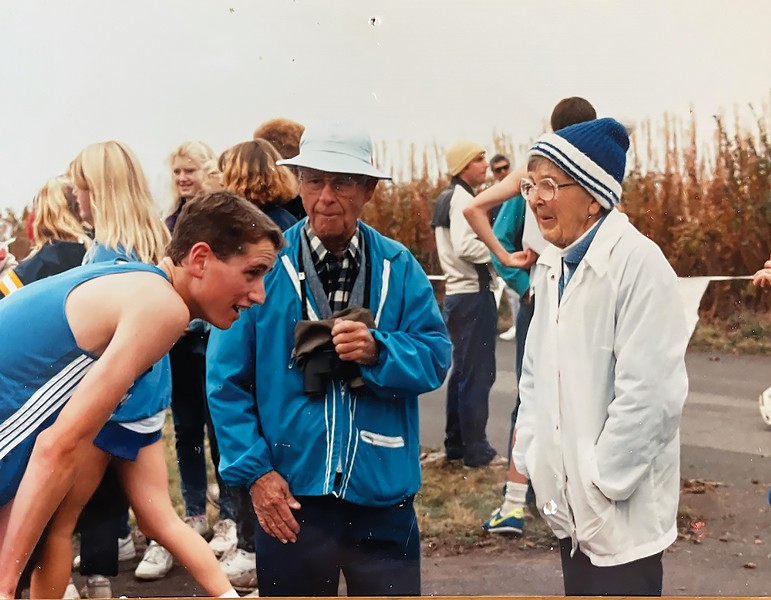 Bill and Emily Langenbach had a grandson that ran cross country and track a few years before I became the track and field coach at Fortuna High School in 1982. He tried hard and he found some athletic success, and they became fans of the sports.

Every season from then on, they would come out for each local track and field and cross country meet, they even made plenty of road trips. The little old couple, hand in hand, sitting next to each other in the pickup, growing older and smaller with each passing year.

They donated to the high school programs with money and lent their support. They donated to many local agencies as well, such as the police and fire departments. I became good friends with them, especially Bill. Many times I stopped by to chat at their house on Rohnerville Road, not far from where I lived, and I learned a lot from them. I painted their house twice and Bill taught me a couple lifelong tricks about painting, a skill I had practiced every summer since my teen years. He had the coolest shop with every type of tool, including many of his own inventions.

Each year, everyone on the team knew the Langenbachs and would thank them for coming to the meets rain or shine, cheering each athlete enthusiastically until dark. Their encouragement showed they believed in trying hard and that each person who competed needed to be cheered on. They brought treats for the troops and we named a post-season award for them: the Inspirational Award. Our teams would cheer more than any others and they were the lead cheerleaders. It created a special bond, having this kind couple cheer so hard for everyone. The team loved them.

The Langenbachs became particularly fond of one of the all-time star athletes I have coached, Mike Katri. But they always let him know it wasn't because he won, but how hard he tried and the improvement that he made that they appreciated. Still, as he got better and better, they treated him like a grandson who was a star.

Katri would wait for them at each meet and walk in with them and keep them company during the races. Those who knew Katri might not have expected that. He won the state meet in Los Angeles in 1992, becoming the fastest half-miler in the U.S. The Langenbachs were the second people I called from L.A. They whooped and screamed.

Bill had been a bridge engineer earlier in his life and had done very well. Emily was from Fortuna but they had met and lived their life in Sacramento, though Bill did a lot of work up here, as well. They raised two brilliant kids and when they retired, they bought a house near family where Emily was raised.

Each day, they would walk the same route up in the hills across the road together, hand in hand, slowing down through the years but always holding hands. They were avid bird watchers and flower growers. They got up in the middle of the night and danced, they went to Burger King every day, where the staff knew their order and would cut their Whopper in perfect halves for sharing.

The Langenbachs were the greatest of fans but also role models of sharing and support for many student athletes who had never seen such a bond. The couple told me one time that they had had a couple disagreements in their 60 years of marriage but never had a fight or gotten angry with each other. They were totally connected as one.

Emily started to slip into cognitive and physical problems as they aged into their 80s, though Bill was still lucid and healthy. They grew unable to attend meets, walk in the hills together or dance in the front window at 3 a.m. She was hospitalized for various ailments, none of it seeming to help her mind. Bill spent a lot of time milling around the yard out front, tending to the flowers. He told me they had a deal to be each other's caregivers exclusively and made a pact to go together.

I would stop to talk with him as I could see he was getting more and more lonely and depressed. Bill said that Emily often didn't know who he was, that she refused to take her medications and was showing signs of anger. She was slipping away and the only thing he wanted to do was help her.

The last time I stopped by, Bill was slouching on a stump in the front yard, crying. He said he couldn't stand to watch Emily suffer all day, moaning. I saw signs of confusion and anger in Bill, as well; he was getting stories and people mixed up. He was as miserable as Emily.

We went to the shop and he showed me his deer and elk mantles. He had quite a collection of hunting trophies and guns. His stories were confusing and desperate. He said, "I've been dancing alone at night and pretending that Emily is dancing with me, but it's not the same. I think tonight I'll get up at 3 and dance alone and pretend harder that Emily is dancing, too."

Just a couple of days later I got a phone call from his son-in-law. When I saw the number pop up, I said to my wife "Emily must have died." But when I answered the phone, he said, "It's worse than that — they are both gone."

When I drove by their house, it was taped off and the window blinds were closed. Thinking back to the Times-Standard headline the next day, I want to pretend it said, "Lovebirds now dancing together again," but it didn't.