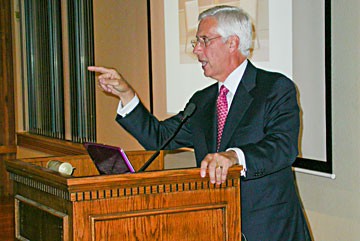 A couple of rings and then, in a chipper sing-song: "Thanks for calling The World's Greatest Bank this is Tracy how may I direct your call?"

That's how tellers at Umpqua Bank answer the phone, all earnest and frighteningly pert. Lots of companies force this kind of pathological sunniness on their workers, like those acid-trip circus costumes worn by embarrassed teenage girls squashing lemons at Hot Dog on a Stick.

But here's the craziest thing: At Umpqua Bank they seem to actually mean it. Of course, everyone has their bad days, so no doubt the slogan has been uttered through some gritted teeth. But on the whole, they say that shit with conviction.

"People think it's silly," admitted Carol Moorehead, vice president and loan agent -- uh, make that "commercial relationship manager" -- at the Eureka store. "I used to think it's silly, but it's true!" she chirped.

Yes, their locations are called "stores" not "branches." Umpqua President and CEO Ray Davis says he's in the retail service business, not banking. (And he hates it when reporters put "stores" in quotes.) His point is that banks are generic and boring while retailers -- successful ones, anyway -- are customer-focused and innovative. He designs his banks to be stores -- cool stores where people hang out, drink coffee and maybe, after finishing their Sudoku, drop 50 grand into a 12-month CD at 2.1 percent.

When Davis took over the Canyonville, Ore.-based South Umpqua Bank in 1994, the company had six branches and assets of $140 million. Now based in Portland, Umpqua's up to 148 branches and $8.3 billion in assets. Employees love their wages, their full health insurance and the 40 hours of paid time they get each year to volunteer in the community. Umpqua ranked 13th on Forbes' 2008 list of the 100 best companies to work for.

And here's the kicker: This "regional community bank," which is flourishing while industry giants drop like struck Goliaths, is about to receive $214 million in federal bailout money. It's part of Treasury Secretary Henry Paulson's plan to pump $250 billion into the nation's banks -- not the struggling ones ("Let 'em die," seems Paulson's philosophy), but the healthy ones, the ones in a position to lend.

Davis was in town last week, droppin' knowledge at the Wharfinger to 200 or so stockholders, customers and potential customers. As soon as this snowy-haired, smooth-talkin' CEO took the podium it was clear that Umpqua's company-wide ebullience emanates directly from him.

"I'm an eternal optimist," Davis said. He acknowledged that the U.S. economy has been struck by "the perfect storm" but insists that the clouds are starting to break up. Housing prices are getting close to bottoming out, he said, and consumer confidence is poised for a rebound, if only the Grumpy Gus media would report some good news for a change.

Oh, and the "bailout"? That's a misnomer, he said. It's really a "buy-in." Here's how it'll work: The Treasury gives healthy banks cash money (whether they want it or not) in exchange for preferred stocks, making every taxpaying citizen a shareholder. Those banks, in turn, issue more loans -- thus greasing the wheels of our economy -- and agree to pay the government a five percent dividend over the next five years.

Eventually, as the economy recovers, the government will sell the stocks at a profit. If they haven't done so in five years, banks will start paying the government a nine percent dividend. Either way, Davis said, "We're all gonna make money." In fact, he said, once We the People see how well it works, we'll turn to the government and say, "Hey, can we do that again?"

After his talk, Davis stood around glad-handing, answering questions and generally exuding his personal philosophy: "Nothing beats positive passion." The man's charm is undeniable. But eternal optimists -- like eternal pessimists -- must be wrong some of the time, right?

"The stocks are so depressed right now, they've got to go up," Davis responded. "And I don't care if they go up three dollars, four dollars or 20 dollars; taxpayers are gonna make money on it." Then he turned the tables. "Ask yourself this question," he said. "Could this be a buy-in? Y'know, it could be, couldn't it? Think of it that way."

May as well. By today, Davis likely will have his $214 million, regardless of how anyone thinks of it. "Everybody in this room," Davis said, "including you -- you own some of me next week when I get this money." He said it like Santa Claus, smiling broadly and exuding what can only be described as positive passion.