The Big Picture at Street Level 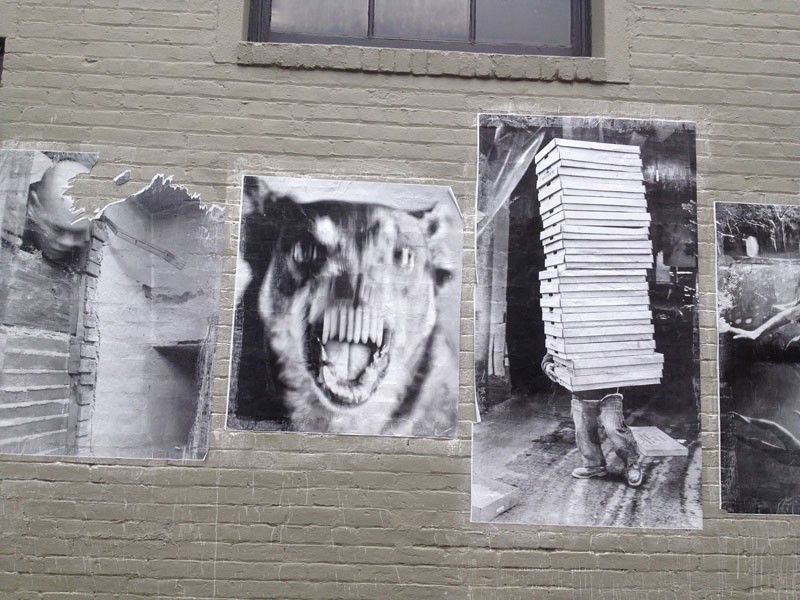 Arcata punches above its weight when it comes to art. We've witnessed the debut of Lush Newton's monumental polka-dotted equestrian sculpture and a paradigm-shifting traffic installation that boldly confronted local motorists' worldviews. Now a fresh crop of wheatpaste posters has sprouted near the plaza. Next time you find yourself on H Street, sashay down the alley next to Northtown Books and check out the photographs there.

The site is central, but it can be surprisingly quiet — contemplative even. On a recent weekday the strip was bare except for a few tangerine-colored poppies pushing up between the cracks, a blasé seagull and the random street flotsam of an unmated latex glove and an empty fifth of Crystal Palace vodka. It was a good place to look at art.

Large printouts of 26 black-and-white photographs are pasted in the alley. Portraits and nature scenes predominate. A pin-up vamps; a nude man stands in graceful contrapposto. Another man regards us from a grove of flowering trees. Two boys and a girl stand together in a forest. Some images seem almost meme-ready. In one picture, two cheetahs nuzzle; in another, a dog lunges straight at the camera. There's a shot of hands releasing butterflies into velvety darkness.

Many of these pictures seem self-consciously photographic, in the sense that they call attention to the camera's super powers: the array of literally inhuman proficiencies that experimental filmmaker Stan Brakhage called the "camera eye." There is an extreme close-up, an image that appears to have been shot underwater, and one that uses a long exposure to capture a pyrotechnic afterimage.

A query at Northtown Books led to Daniel Southard, the Arcata-based photographer who gained permission to install the show. Southard said the exhibit was inspired by a public display of photographs titled The Big Picture, which he saw in Denver this spring. That exhibition, curated by artist Mark Sink, used walls around the city to show a selection of photographers' work for Denver's inaugural Month of Photography. The show was a popular success, and the concept spread.

Southard took the initiative to bring the project to Arcata. Sink gave him access to an archive of "amazing images" submitted for display, along with wheatpaste instructions. (Only two of the images in the alley are Southard's; the rest were submitted.) Southard directed the installation with help from others, notably Kathleen Hemeon, who helped curate the images.

Southard says he sees himself more as a photographer than a street artist, although he appreciates public display and the advantages it holds in reaching a diverse demographic.

"Galleries have closed doors much of the time. They generally are not places you can come in with screaming kids, or bring a backpack or a dog," Southard said. "I do not want to denigrate the important work that galleries do — I consider them indispensable — but they are not places where everyone feels comfortable. This way of showing art opens the world of fine art photography to the most general public imaginable." Southard added, "I tried to ... improve and beautify the alley, while honoring the atmosphere that the place already has."

In fact, the original images go through some intriguing changes when presented in this street-level mode. The printer yields a surprisingly high-quality image characterized by velvety grain and dramatic tonal range. The texture of the brick wall shows through the paper. Pale wheatpaste drips from the lower margins.

When artists paste flyers in public, they usually have a message to convey. Wheatpaste flyers have been an important medium for political street artists and those addressing close-knit subcultures — think of Raymond Pettibon's flyers for the Los Angeles punk scene, or skateboarding images by Barry McGee in the early 1990s. But these pictures go against such expectations, delivering no politicized messages.

Furthermore, while wheatpaste flyers have commonly been associated with hard-nosed realism, many of these images are beautiful and aestheticized. The people in the photos are young and attractive. Many seem to exist in serene harmony with an unblemished, Edenic nature. You scan these pictures in vain for grit, strife, or rubbish — or for any allusion to the screens and media filters that structure so much of our lives. It's fair to say that this archive offers a pleasing vision of the world as we might wish it looked — not the way it really does.

Even if the Big Picture images didn't start out as traditional street art, they have sort of evolved into that condition, sparking dialogue with taggers, bystanders and aimless doodlers of all kinds. One anonymous commenter urges us to support transgender people's rights. Some literalist used blue marker to outline the body of a girl in a bikini top. Graffiti writers Sharky, Yawns and Moron have tagged the zone. And a smoker's portrait has been rather fabulously glossed by an appropriately placed real cigarette burn. It's going to be interesting to watch this interaction unfold over the images' lifespan.

Southard is planning more exhibitions in Arcata, Eureka and beyond, raising donations and accepting submissions from local photographers. Business owners, contact him if you have walls that may be ripe for wheatpaste imagery. You can see Southard's own work and learn more about the project at www.drsfoto.com.