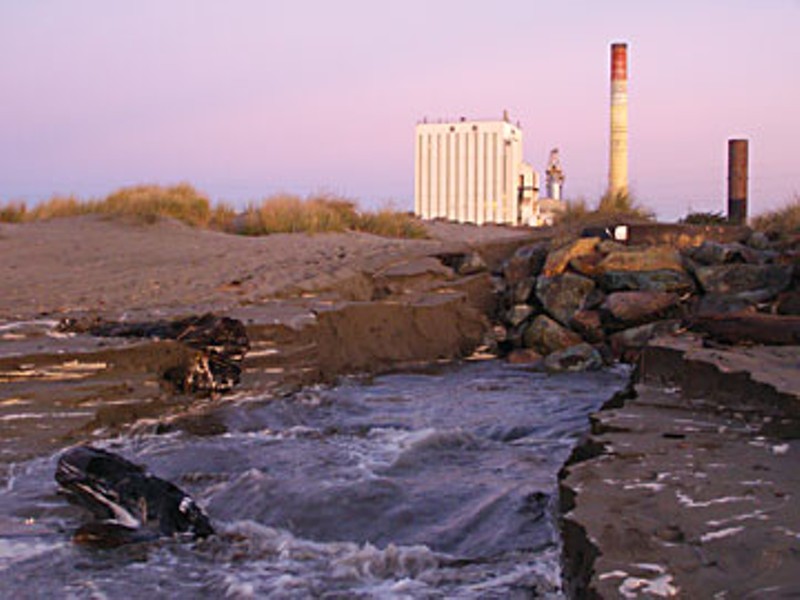 The torrent of water from Evergreen Pulp Mill. Photo by Rachael Brilbeck

The torrent of water from Evergreen Pulp Mill. Photo by Rachael Brilbeck

A couple of weeks ago -- on Tuesday, Jan. 13 -- Journal reader Rachael Brilbeck went for a stroll on the beach on the North Spit, right across from the Evergreen Pulp Mill, which is currently shuttered. Everything was normal when she set off on her walk, but when she returned an hour and a half later she saw something strange.

At some point in the interim, a gusher of water opened up out of the ground, right beneath some kind of large vent. Brilbeck and others watched the torrent flow for about half an hour. As it made its way to the Pacific, it cut a deep channel into the beach.

Brilbeck took photos and brought them into our office the next day. She wondered: Was this a spill from the pulp mill? The mill has an exhaust pipe that carries its liquid effluvia underground and out to sea -- could the pipe have stopped up somehow, spilling noxious mill residue on to the beach? She thought she noticed an unusual odor in the water.

It took us a little while to figure this out, but it turns out that the spill Brilbeck witnessed had little to do with the mill. That was clean river water making its way out to the ocean -- as much as a million gallons of it, according to Humboldt Bay Municipal Water District Superintendent Barry Van Sickle.

Van Sickle told us last week that the spill was a result of some faulty computer equipment at a water tank that services the mill. Water levels at the tank are monitored electronically. The device on the tank fritzed out, registering the tank as empty when it was actually full. So the district sent water down the pipe leading to the tank, causing it to overflow into the outlet pictured above. This went on for about an hour before district personnel figured out that something was wrong and turned off the spigot.

It might be galling to places like Las Vegas, San Diego or Barstow, but losing a million gallons of water isn't that big of a deal for the Humboldt Bay Municipal Water District. We're currently running a huge surplus of the stuff, even taking this year's dry conditions into account. Of course, Van Sickle said, the district would prefer not to accidentally dump mass quantities of water into the ocean, but there are unlikely to be any repercussions. It's river water. It was headed that way in any case.

"Our office isn't going to pursue any enforcement actions," said Kasey Ashley, investigator for the North Coast Regional Water Quality Control Board, on Tuesday. "It's fresh water going into the ocean, which happens every time it rains."

The only consequence likely to be of note was brought up by someone who witnessed the spill with Brilbeck. She told us that this fellow, apparently a surfer, noted that the movement of sand into the sea was likely to create a nice new break at that spot.