How do you hold an election during a global pandemic? Without knowing it, California voters have been practicing for years.

Since the 1920s — and before that, with a brief foray during the Civil War — a growing share of the statewide electorate has been voting remotely. Now that the coronavirus pandemic has turned public assembly, waiting in line, exchanging envelopes and all the other trappings of Election Day into a latent superspreader event, Democratic lawmakers are looking for another way: the mailbox.

If all goes as planned, every registered, regular voter in the state can expect to get a ballot in the mail before the November 2020 election — whether they ask for one or not.

Many Republicans, President Donald Trump most vocal among them, say more remote voting will favor Democrats and serve as a Trojan Horse for fraudsters. There isn't much evidence to back up either claim — more on that below. But it's turned the logistically complicated question of how to hold an election during a public health crisis into an even more complicated, politically charged one.

Democratic Gov. Gavin Newsom faces lawsuits over his executive orders to reshape the coming elections, as the Legislature works to iron out the details. Voting rights groups want to ensure that some in-person voting options remain, but county election regulators say they're short on time as they scramble to find enough poll workers and socially distance-able event spaces to hold this very different kind of election.

Can the state pull it off? Santa Barbara County registrar Joe Holland, president of the organization representing election officials in California, pauses before answering:

"I better hope it is. This is the biggest challenge of my career."

How exactly will the November 2020 election be different? 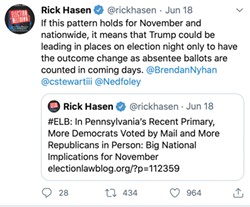 "The health concerns of forcing people into in-person voting during a pandemic are all too real," said Silicon Valley Democratic Assemblyman Marc Berman.

That's why Democratic lawmakers, the governor and even some Republicans in Sacramento want to make sure that every registered and active voter automatically gets a ballot in the mail before November 3 — no signing up required.

It's a two-part plan:

1) County election officials must send a ballot to every registered and active voter in the state.

A new law authored by Berman lets counties get a jump-start processing early votes, and instructs them to count ballots they receive up to 17 days after the polls close — as long they are put in the mail on Election Day.

2) For those who need in-person assistance; didn't get their ballot as planned; don't have a fixed address; or who need to replace a ballot that's been torn, lost, pet-chewed or food-splattered, counties still need in-person voting options.

Newsom has penned an executive order to that effect. It's been challenged in court, but the Legislature is considering legislation that would do the same thing.

"One way or another," said Orange County Sen. Tom Umberg, "we're going to have a different kind of election in the fall."

Won't it take longer to know who won? 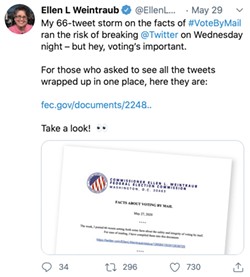 Probably. California is famously slow at tallying ballots — though election administrators might prefer "famously careful." The rules that make it easy for Californians to vote from home, register to vote or change party affiliation on Election Day mean that county officials regularly have to spend weeks after the polls close checking signatures and processing registration applications.

With the number of mail-in ballots expected to increase by upwards of 35 percent this year, the count could slow even further. And given that Republicans appear less enthusiastic about remote voting — more on that below — experts such as University of California at Irvine election law professor Rick Hasen worry that an inordinate number of race outcomes will shift from the GOP to the Democrats as late absentee ballots are counted, providing a windfall for conspiracy theorists.

A new state law is giving counties a sall work-around: Registrar offices can begin processing ballots as soon as they arrive — but still no counting until the polls close.

How many in-person voting options will counties have? 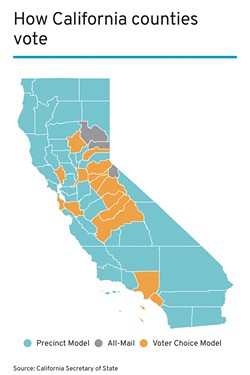 Under the pending legislation and Newsom's executive order counties can choose as they plan the November election:

Option A: Hold in-person voting just as they did during the March primary. For most counties, that's roughly one polling place per 1,500 voters.

Option B: Pare down the number of in-person voting locations to one per 10,000 voters — but keep them open for four days leading up to Election Day to allow spaced-out early voting. These counties would also have to deploy a certain number of ballot drop boxes, opening them up by early October.

In the March primary, 15 counties had at least 100 precinct locations. San Diego County had 1,361. That's a lot of venues to rent out, particularly if the pandemic takes senior homes and schools off the table.

Lawmakers may allow counties to rent out businesses focused on selling alcohol. So Joe Holland, Santa Barbara County's registrar, is asking hotels if the county can use their ballrooms. In San Luis Obispo County, registrar Tommy Gong hopes to rent a vacant airport terminal. Another concern: A typical poll worker is a retiree — a member of a high-risk group for COVID-19.

All of those logistical obstacles are pushing medium-to-large counties toward Option B. Which has its own complications.

Locations will need to be larger, narrowing the list of possible venues. If the centers will be open to any registered voter in the county, regardless of where they live, they will have to be able to print ballots on demand — meaning more sophisticated equipment and tech-savvy poll workers. Three days of early voting will mean three times the staffing demand.

And with either option, hosting an election in the COVID era will require rigging up each location with cough and spittle guards; spacing out equipment; and stocking up on cratefuls of masks, gloves and hand sanitizer.