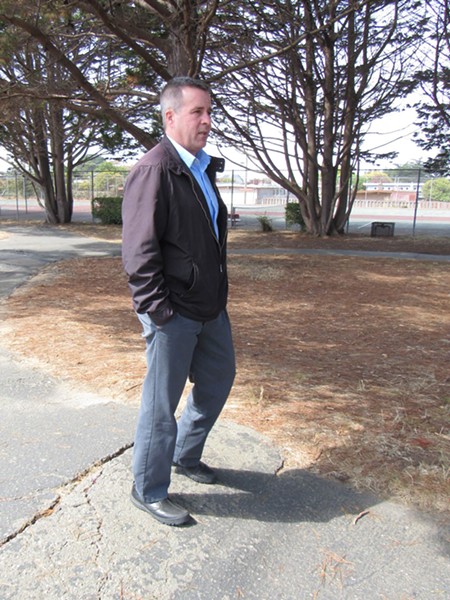 After the Journal ran a story about Highland Park last month ("Appropriate Use," Oct. 6), Eureka Parks and Recreation Director Miles Slattery reached out. The article was good, he said, but some of the numbers cited — while accurate — were a bit misleading. The story compared total parks and recreation department budgets for Arcata, Eureka and Fortuna, finding the cities' investments were roughly equal. But it turns out that, if you look at what the cities spend from their general funds solely on maintaining their existing parks, Eureka trails its neighbors, dedicating just 2.8 percent of its general fund spending to the cause compared to 5.2 percent in Arcata and 8.8 percent in Fortuna.

Our conversation with Slattery — who oversees a department with six employees who combine to oversee 600 acres of space spread across 13 parks, nine playgrounds and six ball fields, not to mention all the landscaped areas in and around city parking lots and buildings — ventured into some interesting areas, including public safety, addiction, poverty and community. So, we've decided to share it with our readers.

NCJ: Are parks a luxury or a necessity?

Slattery: Parks are a necessity for a healthy and livable community. Parks and community spaces are an essential community tool as a proactive deterrent for youth, a place for respite and a platform to engage in positive and healthy activities for people of all ages. A community without safe and well-used parks is a blighted community.

NCJ: How can parks help make a Eureka a safer place to live?

Slattery: It's not parks themselves that can make Eureka a safer place to live, it's the surrounding community. Providing public spaces that create a desire for community ownership can provide an incentive for youth to make better decisions. ...

When Eureka's parks are filled with safe recreational opportunities, both active and passive, the increased use of the parks provides a more effective deterrent than a police response, which is primarily a reactive approach. To rely on enforcement has proven to be costly. The cost of putting an officer at every public space to deter inappropriate uses will never be feasible and be much more costly than providing a space that the community takes ownership of, which will inherently provide an equal deterrent.

Any family or neighborhood, regardless of income or ethnicity, does not feel a sense of community ownership and desire to protect their public space when the municipality does not demonstrate an equal interest. This sense of ownership is key to deter inappropriate uses. Poorly maintained parks result in them not being used by the neighboring residents.

NCJ: What can the parks and recreation department do to help make that happen?

Slattery: Parks & Recreation can contribute to this through various ways — one being the recreational programming itself. Last year, we were awarded a grant through the State Parks Habitat Conservation Funding, which allowed us to expand our free summer camp program at Cooper Gulch into an environmental education camp. With 75 kids participating in recreational activities for nine hours each day during the summer months, we saw a drastic reduction in inappropriate use during those months at Cooper Gulch.

The challenge is that, in order for us to even have programming or encourage the public to engage in appropriate use of our parks, they have to be maintained and usable in the first place.

The state has not provided park bond funding for about a decade. ... P&R has been looking at creative ways to obtain funding for our parks. We have applied for two grants recently for parks.

We also have established a fund for Sequoia Park at the Humboldt Area Foundation to solicit donations from businesses and the public, and are beginning to launch the campaign.

NCJ: Do you feel like there's a correlation between parks and recreation's historic funding levels and crime rates?

Slattery: No. What I believe is that the reactive approach to public safety has proven to be a broken system. It's time we recognize this, and collectively embrace a proactive approach before it becomes too costly to save the areas that have been neglected over the years.

Even with this significant increase in funding, we have seen an increase in the majority of crime rate statistics between the 1980s and now. This has nothing to do with the effectiveness of our police and fire services. They provide exemplary service and do an incredible job. The problem is the theory that the only way to deter crime is to reactively punish people so they won't continue their criminal ways. This obviously doesn't work.

NCJ: Humboldt County has a host of cyclical problems, things like poverty and addiction. Is there a role parks and recreation can play in getting to the root of some of the entrenched problems?

Slattery: I think our department is on the cutting edge of recognizing we have a role. We have developed proactive programming in Parks and Recreation to not only provide access to families affected by poverty and addiction but also resources for these community members.

The Community Access Project for Eureka (CAPE) has been developed over the past year to remove barriers for disadvantaged community members so they can have access to programming that was never available to them previously. We have secured donations, grants and developed partnerships so that we can provide transportation, free summer camps, community classes and after-school care for disadvantaged youth — whether houseless, low-income or anyone else experiencing barriers.

This was the first step in the program. Once we were able to provide this for the children and free up time for the parents/guardians of these youth, we developed and implemented programming for disadvantaged and homeless adults to provide them resources.

We developed Pathway to Payday and the R.E.N.T. Ready program. We implemented these programs in partnership with the Betty Kwan Chinn Day Center and have had great success. Fifteen of 19 attendees of the Pathway to Payday secured jobs. Two were hired and still work for Parks and Recreation. This model has proven to be such a success that we were recently invited to present at the California League of Cities to talk about the CAPE program.

NCJ: Eureka remains in a budget pinch without enough funds to hold the line, meaning additional investment in one department necessitates taking money away from another. Come June, why should the Eureka City Council approve more parks funding if it means making reductions elsewhere?

Slattery: Look, I don't want to see any department's funding cut. I just feel we need to recognize that a greater investment is needed in our parks and quality of life services. I understand that public safety is a top priority, and it should be.

However, investing in our public spaces will inherently provide a deterrent to crime. Investing in our parks, public spaces and quality of life IS investing in public safety. This has been demonstrated over and over, even in Eureka. Calls for service have significantly decreased along the Hikshari' Trail and Elk River area since it was developed. The same can, and will, be said for the rest of the Waterfront Trail development.

NCJ: How has the role of the parks department in Eureka changed over the last decade?

Slattery: We have seen a significant decrease in funding and staffing levels. Because of this we have gone through multiple re-organizations. The big reorganization was the development of the Parks and Recreation Department in 2013. Since then we have taken the "other duties as assigned" statement in job descriptions to a new level.

Furthermore, we have put a heavy emphasis on alternative funding for capital projects through grants and local donations. We've put more of an emphasis on trying to increase revenue through new programming and facility rental. What has been successful in other communities is dedicating a percentage of TOT toward parks and public facilities. This doesn't increase taxes for our community members and would provide more attractive amenities that could draw greater visitor numbers with longer stay times. I think this is something we should look into so we could have a sustainable funding source.

NCJ: What role can community members take in advocating for/helping with parks?

Slattery: Volunteer and donate where possible. We would also like to hear from the community about what they would like to see or any thoughts on strategies they have for improving our parks. They can call me any time, 441-4184.

We would really like to establish a general Parks Improvement Fund that could fund improvements for all of our parks at Humboldt Area Foundation. It costs $10,000 to establish the fund. Through the establishment of the fund, a prioritized list of parks improvements would be defined. We could solicit funding from various grant opportunities, businesses and local residents to take care of those priorities in a systematic way.

This interview has been edited for length. Read more at www.northcoastjournal.com and, if you want to get involved to help Eureka's parks, call Slattery at 441-4184 to find out how.