The Boys and Girls Guide To Getting Down: A Real Life Guide to Sex, Drugs, and Bad Behavior 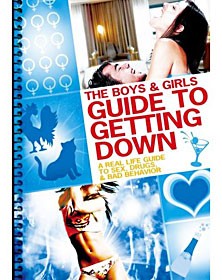 Attention NorCal party people, or any partiers for that matter: Prepare yourself for an all-nighter. Put on your spiffiest gear, get your recreational substances lined up and call in your wing-people to get schooled on the carnal arts of getting wild.

Set in Hollywood, the film follows various scenesters through their escapades on Cahuenga (a well-known drag in the freaky city). Throughout the flick, the young partygoers are observed and advised by a team of scientists, whose goal is to compile the ultimate guide to being a successful partier.

Cheesy graphics abound, initially accenting a psychedelic montage of tattooed hipsters. Being that I am not tattooed, nor a hipster, I was unimpressed. Fortunately, the film is structured in an organized fashion (which appealed to my OCD side), so I was able to relax and endure the onslaught of the "too-cool-for-school" characters.

True to guidebook format, the film is broken into chapters, each addressing a vital issue. My personal fave was the Getting In chapter, which provided techniques for getting past stubborn bouncers (not generally a problem, locally). An educated partier can learn to spot an experienced bouncer based on the number of "hot dogs" (fat rolls) he has on his neck: The more hot-dogs, the more experienced. Makes sense in some strange way.

Other chapters include Carnal Knowledge, Pussy Power and The Merits of Marijuana. One highlight: A bit of advice is offered on choosing your weed appropriately, and Arcata gets a shout-out for its dank buds. (Sorry, Arcata Main Street, but you've got an uphill battle.)

My conservative side (or maybe more intelligent side) was alarmed by the segment on how to drive drunk and not get caught. I was also quite turned off by the extensive segment on cocaine. When out, trying to be hip, I try to ignore the fact that many around me are hopped up on blow. The movie makes the claim that drinking and doing coke is A-OK, which I will go ahead and denounce as bullshit. People die from that concoction, and that's not funny.

Our young hipsters' night ends appropriately: with sunrise. Tips on avoiding the awkwardness of the morning after are provided, and I was left feeling lucky that I am not one for getting trashed and having one-night-stands. Of course, by now, our seemingly random group of characters had been united via the scene.

If your feathers aren't ruffled by substance abuse and free love, check it out. The movie hit video stores earlier this week.