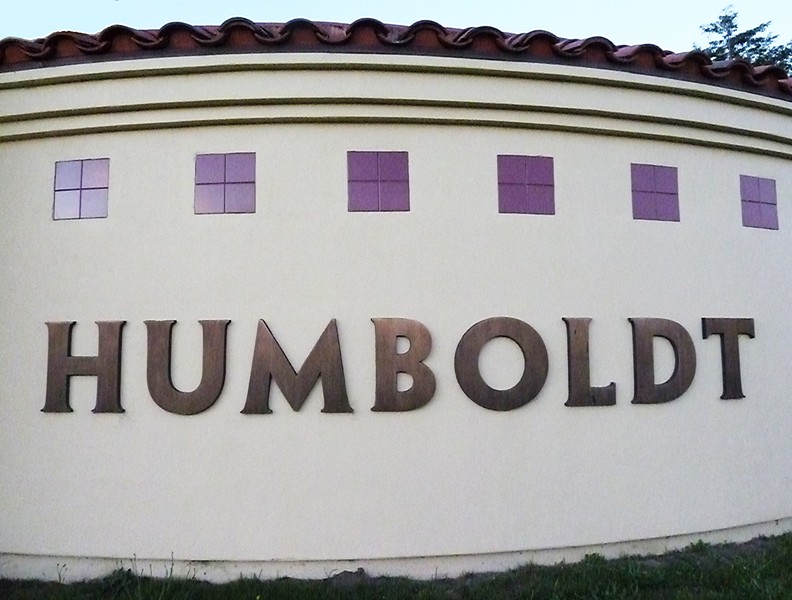 It's all about the brand. Humboldt. And there's a battle raging, brand warfare over what that word represents and how it's spun in the world beyond the Redwood Curtain. On the one hand you have the Humboldt Convention and Visitors Bureau that sees Humboldt as synonymous with redwoods (see this week's letters). The chamber has a humorous campaign, "Hooked On Humboldt," making light of our well-established association with the cash crop marijuana. It realizes chances are when the word Humboldt shows up in a Hollywood movie or a song, it's in reference to weed.

Then there's something called Humboldt Made, a consolidated effort partially funded by Headwaters money aimed at steering the Humboldt brand in a more wholesome direction, crafting a soft-focus bucolic vision that includes Cypress Grove and Loleta cheeses, Stargazer lilies and the like (see Ryan Burns' Journal coverage, "Rebranding Humboldt," June 25, 2009, and "Humboldt: The Brand," Feb. 11, 2010).

The dueling notions of Humboldt branding are hard at work this weekend. The Made crew convinced the Redwood Acres Fair to rebrand as the Humboldt Made Fair at Redwood Acres. Plans includes lots of good clean fun: a Thursday film night including Jensen Rufe's Rural Rock and Roll (I'm one of the talking heads in it), a "Taste of Place" locavore dinner on Friday night and a rock 'n' roll "Music Fest" featuring Sour Cream and Dr. Squid. Saturday night there's an old fashioned Barn Dance with contra dancing.

That stands in stark contrast to a pair of Humboldt brand events elsewhere on Saturday: two CD release parties in connection with a new album, Rhyme and Resin, by Potluck. The well-established hip hop duo is comprised of James Kerri, aka 1-Ton, a large black dude originally from San Diego who moved to Humboldt in the '90s to attend HSU (he graduated with a business degree) and Humboldt native Joshua Leiderman, aka Underrated, self-described as "straight from the country." While they've been part of the local scene since the turn of the century, they spend more time on the road, repping Humboldt on tours with mid-level hip hoppers such as Tech9, Twiztid and Kottonmouth Kings.

Rhyme and Resin finds Potluck in fine form, rapping about the usual topics: whiskey (they prefer Crown Royal), women and, of course, pot. The press release for the record may exaggerate a little: "Born and raised in the endless marijuana fields of Humboldt County, the weed capital of the world, Potluck has lived constantly surrounded by acres of weed plants, thousands of pounds, and the inventors of all the popular strains. Through the power of music, Potluck tells the full story of the only drug business where the hippie is king and peace, love and happiness reign supreme."

The opening track, "Wake-N-Bake," lays out the Potlucky lifestyle: You hear the burbling sound of a bong hit behind the beat and the bass. "Woke up in the morning, wake-n-bake, yessir..." begins 1-Ton. The duo trades lines on the chorus, name-checking the brand: "Yeah, life is great. It's time to celebrate. Got a blunt of Purple Haze. Light it up. Let's get blazed. Humboldt County's in the building, throw your hands in the sky. Welcome to the party; everybody's getting high."

As the song ends Underrated rhymes, "Kids say I'm their favorite and a huge inspiration. I appreciate the love and thanks for all the motivation." Now some might worry that they're a bad influence. They've always felt the opposite. "We've got a positive message," 1-Ton told me when I first interviewed the band 10 years ago. "Obviously we talk about the number one cash crop up here. That's our inspiration, but it's all positive. It's about our lives, about me and my man here, living life, trying to survive, just everyday experiences that any person, any race, any age group can relate to."

Back to those CD celebrations, the first is an all-ages afternoon signing party at the F.Y.E. (For Your Entertainment) music/DVD store at the Bayshore Mall. Come nighttime Potluck takes it to the Red Fox Tavern for a show with guests spots from friends Ishi Dube, Berel Alexander and Never Die.

Meanwhile in Blue Lake, Dell'Arte kicks off the Mad River Festival this weekend with Mary Jane: The Musical, a different examination of Humboldt's la vida ganja. The musical review/play directed by Michael Fields and starring Joan Schirle as the grower Mary Jane, features tunes by local songwriters reflecting a broad swath of community attitudes, hopes and dreams, fears and apprehensions about how the notorious herb impacts our lives.

Across town Friday night in Blue Lake Casino's Sapphire Palace (and on another side of the cultural universe) Humboldt's longest running country band, The Roadmasters, celebrates 35 years of making music with a CD release party for Barstools and the Blues. (As far as I know, the disc has no songs about marijuana.)

How does a band last that long? Keyboardist Kevin Held jokes that they hate each other. "Actually we talk out our issues best we can -- no egos or bad attitudes. We all have had family and have lost family and do all we can to give back as performing artists and tell our stories. We rehearse regularly and set goals. It has been more difficult over the last years with health issues, but we play on -- it's what musicians do best." Added bonus at the free party: a mechanical bull. Wear your cowboy hat and be prepared to wave it in the air like you just don't care.

Saturday night at the Jambalaya, World Famous presents Battle of the Bass, "a friendly competition for local electronic producers and DJs" with the audience choosing their favorite gut-rumbling bassmeister. The winner gets a slot on the Famous fall line-up.

The Berel Alexander Ensemble takes that ambitious biodiesel bus Kickstarter fundraising campaign to Robert Goodman Wine Bar early Saturday eve (7 p.m.), playing some music and passing the hat. With Kickstarter, you only get your pledge money if you hit your goal, and they have a way to go. That's also the night Carson-Nation debuts on OWN (see Blog Jammin'). The TV peeps shot a scene with BAE for the finale; we'll see if they make the cut.

Saturday at the Arcata Alibi, see Seattle's Virgin Islands, a post-punk outfit fronted by Michael Jaworski (formerly of The Cops) with locals Splinter Cell, members "formerly of" too many bands to list.

Chris Parreira just returned from the Kerrville Folk Fest with a pocketful of new songs. We may hear one or two when The Lonesome Roses and The Trouble play Tuesday at the Jambalaya. The Rezonators close the triple bill. Chris promises a 9:30 showtime, "on the dot so we don't keep people out too late."

This is also the weekend for the Kate Wolf Memorial Music Festival with folk and roots galore on the Black Oak Ranch down in Mendo Friday through Sunday, including Los Lobos, Taj Mahal, Mavis Staples, Nitty Gritty Dirt Band, Bruce Cockburn, David Bromberg, Preservation Hall Jazz Band and many, many more.